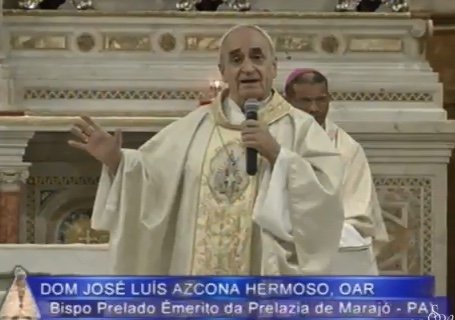 BELÉM, Brazil, August 26, 2019 (LifeSiteNews) ― A retired bishop who has lived in Brazil for more than 30 years said the working document for the Synod on the Amazon neglects key problems in the region.

Spanish missionary José Luiz Azcona Hermoso, O.A.R., 79, was ordained a bishop in 1987 and served as the ordinary of Brazil’s Territorial Prelature of Marajó until Pope Francis accepted his resignation in 2016.

Azcona told CNA affiliate AC1 Digital that the Instrumentum laboris for the upcoming Synod did not address the most pressing issues of the Amazon region, principally its embrace of Pentecostalism, rampant child abuse including pedophilia, and other evils lurking in the area.

A major concern for Azcona is that the Instrumentum laboris has sprung from a misunderstanding of the region he knows so well. First of all, there is only so much influence that Catholic Church retains in the Amazon.

“ … The Amazon, at least the Brazilian Amazon, is no longer Catholic,” the bishop emeritus told AC1.

“This point of departure is crucial for conducting the synod. If the Amazon has a Pentecostal majority, it is necessary to address that reality thoroughly,” Azcona continued.

“Any nostalgia for an Amazon that no longer exists is fatal to its integral evangelization. Even in some areas of the Amazon, the Pentecostal majority reaches 80 percent.”

Pentecostalism has made a  “profound impact” on the cultures and ethnic identities of indigenous people in the region “with its fundamentalist and proselytizing connotations,” he said.

Saying Pentecostalism is “today’s Amazonian face,” Azcona noted that there is “not one word about this point” in the working document for October’s synod in Rome.

Meanwhile, even though the Catholic faith may be represented at Mass, it has not been lived out in either “society” or “in history.”

“The chasm between the confession and celebration of faith in beautiful liturgies and the social, environmental, cultural and political reality has not yet been overcome,” Azcona told AC1.

Second, the Amazon region is plagued by child abuse. Children, the bishop said, are treated like slaves by their parents, and pedophila is rampant.

“Unfortunately, the synod doesn’t know, or knowing doesn’t understand, the significance, for the present and the future of the Amazon, of the faces of anguished, re-victimized and denigrated children, (abused) by their own parents and relatives, subjected to a slavery that forms an essential part of the abandoned and destroyed face of Jesus in the Amazon,” the bishop emeritus stated.

Unless this reality is confronted by the Gospel verse “He who receives a little one like this receives Me and he who receives Me, receives the Father who sent Me,” the Synod document is “straw,” he declared.

According to Azcona, there were 25,000 reports of pedophiliac crimes in Pará, a northern state of Brazil, in a single year. He believes there are four times that number.

“According to experts in this area, for every reported case of pedophilia there are four others besides. If during approximately one year there were 100,000 abused children in Pará, isn’t this face of destroyed children an essential part of the Amazonian face?” he asked.

Azcona suggested that the pastoral sensitivity he associates with Pope Francis is missing from the document, and accuses its authors of romanticizing the region.

“Where is the defense of the Amazon, of its children, in the Instrumentum laboris, and, therefore, in the synod? Let’s stop these false projections about the Amazon, and instead make possible new paths for it.”

The missionary bishop emeritus also criticized the document for its lack of respect for the Gospel and its suggestion that indigenous religion is just as good. This is a contraction of the Second Vatican Council’s declaration that “the words of the Gospel proclaimed by the Church decide the destiny of persons, of peoples, cultures and nations.”

“ … The tendency to equalize the indigenous cultures with the Gospel is overwhelming,” Azcona said.

“Forgetting this fundamental principle renders the synod useless and nullifies the specific and unique power of God in the Gospel, as well as all missionary dynamism in the Amazon and from the Amazon.”

A third lacuna is the presence of Satan in the Amazon, for he is certainly not absent from indigenous culture. The bishop emeritus spoke unabashedly of the reality of demons.

“ … In no part of the Instrumenum laboris is the presence of demons spoken of, or their influence, their malice in persons, peoples and cultures, as well as the victory of Christ, his deliverance and the destruction of the power of the Evil One,” he told the CNA affiliate.

“The document forgets the luminous and guiding pages that speak of the Evil One and his presence in history, to which Pope Francis devotes numbers 158-164 in last year’s apostolic exhortation on holiness, Gaudete et Exultate,” the bishop emeritus continued.

Azcona added that the Instrumentum laboris is suffused with Pelagianism and claims that the Amazonian peoples are better than they are.

“ … The Pelagianism spread throughout the document, leads to attributing to the Amazonian man, to his ethnic and cultural groups, more than what belongs to them, because they are realities created and marked by sin, and it supplants the solid conciliar doctrine about the Gospel and the mission of the Church in the power of the Risen One, as found in Lumen Gentium 16,” he said.

Encouraging local pagan traditions would be a big mistake, he said.

“Finally, the utopian idea to revitalize the pre-Colombian religions, separating them from Christ and the universal Church, would not be progress but regression,” the bishop emeritus explained.

Regarding the working document’s keen interest in the subject of the ordination of married men, Azcona believes that the local priesthood is currently in too poor a spiritual state for such solutions.

“The meaning of the priestly ministry, and specifically in the Amazon, is lost or is dead in the lives or in the authentic pastoral conversion of priests,” he declared.

“Why ordain viri probati within a priesthood in crisis?”

Meanwhile, Azcona firmly believes in the spiritual good of chastity in continence.

“The perfect and perpetual continence of the kingdom of heaven will continue being, a sign of encouragement of pastoral charity and the original source of spiritual fruitfulness within the Amazon,” he said.

The Catholic Territorial Prelature of Marajó is located in northern Brazil and includes dozens of islands in the Amazon River. It covers 41,000 miles and has an estimated population of 260,000 people.