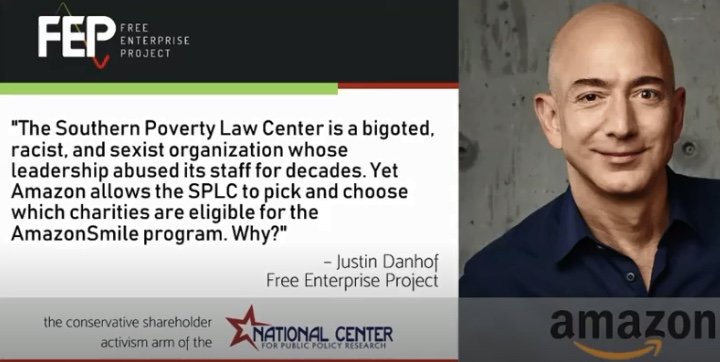 SEATTLE, Washington, May 28, 2020 (LifeSiteNews) – Amazon’s Board of Directors urged investors to reject a proposal calling for an end to its “viewpoint discrimination” against conservative and Christian organizations, most notably found in the retail giant’s reliance on the Southern Poverty Law Center (SPLC) as the “gatekeeper” to its AmazonSmile charitable program.

The proposal was put forward in an audio presentation at the Amazon 2020 annual shareholders meeting in Seattle on Wednesday by Justin Danhof, Esq., general counsel and Free Enterprise Project (FEP) director at the National Center for Public Policy Research (NCPPR).

Danhof asked founder Jeff Bezos and members of the board why they allow “a bigoted, racist, and sexist organization” such as “the SPLC to pick and choose which charities are eligible for the Smile program?”

“Amazon consistently brags about its commitment to ‘diversity and inclusion,’ but I don’t think its board of directors knows what that means. By relying on the SPLC to decide which charities are eligible to receive donations through AmazonSmile, the company is expressing public and open hostility toward conservative and religious organizations,” Danhof asserted in a press release. “That’s viewpoint discrimination and it’s abhorrent.”

“The extreme leftists at the SPLC use this power to exclude groups that it disagrees with ideologically while it, in turn, reaps tremendous windfall from the Smile program,” Danhof said in his challenge to the Amazon Board of Directors. “This is wildly hypocritical.”

“How else can one explain SPLC categorizing groups such as Alliance Defending Freedom (ADF) alongside the Ku Klux Klan?” Danhof asked. “ADF is the nation’s preeminent legal advocate for religious liberty which has scored 10 victories at the United States Supreme Court since 2011. Everyone knows the Klan is a hate group. What the SPLC is trying to do is convince naïve Americans that conservative and religious organizations are morally equivalent to the KKK.”

“In 2014, the FBI removed the SPLC as a source, citing ‘a number of concerns,’” Danhof said. “Last year, even the far-left leadership of Twitter dumped the SPLC from its ‘Trust and Safety Council’ after many of the group’s scandals were exposed.

“Some of those scandals were even exposed by Mr. Bezos’ own radically liberal newspaper The Washington Post, which ran headlines such as ‘The Southern Poverty Law Center has Lost All Credibility,’ and ‘Something Strange is going on at this Civil Rights Institution. It Must be Investigated,’ which called for a federal probe into the SPLC,” he noted.

During the meeting, Danhof and other conservative shareholders repeatedly questioned  Bezos as to why the company engages in such blatant viewpoint discrimination, according to the NCPPR press release.

Bezos refused to address their questions.

“If Bezos can defend Amazon’s outright bigotry, then we invite him to do so,” Danhof said. “It’s pathetic that one of the most powerful men in the world can’t answer a simple question. Yet it is also telling that Bezos seems to have zero defense for this deplorable behavior.”

“We suggest the IRS investigate this corrupt arrangement and clear conflict of interest. In the meantime, shareholders should demand that Amazon end this scheme,” Danhof urged.

“Amazon’s leadership may be that gullible, but let’s show them that we investors are not,” he added.

The Board of Directors issued a response, claiming, “Diversity and inclusion are cornerstones of our continued success and critical components of our culture.”

“We believe “(d)iversity and inclusion are good for business — and more fundamentally — simply right,” continued the statement, which appears to overlook the company’s discriminatory policies toward Christian and conservative viewpoints.

“In light of our demonstrated commitment to our core values of diversity and inclusion for all stakeholders of Amazon, from customers to sellers to employees, as well as our robust risk management process, the Board recommends that shareholders vote against this proposal,” concluded the statement from the Amazon Board of Directors.