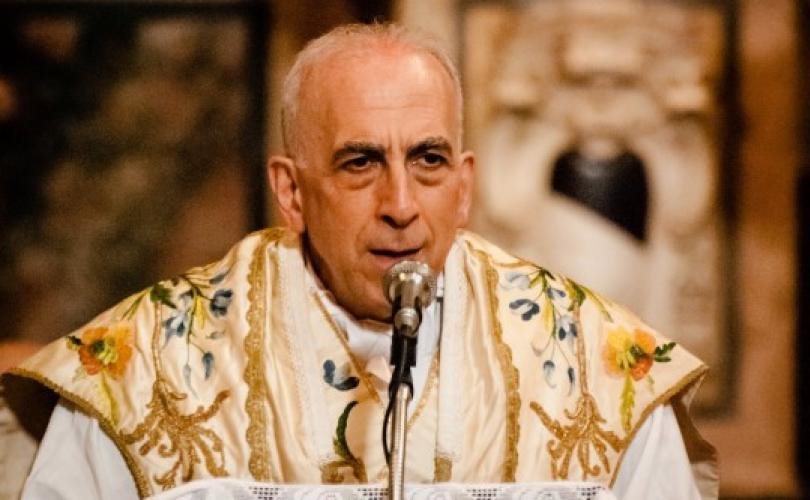 ROME, July 17, 2019 (LifeSiteNews) — Another respected theologian is sounding the alarm on the upcoming Amazon Synod, saying it is an attempt to “create another church” by “demolishing” the true Church from within.

Monsignor Nicola Bux, a theologian and former consulter to the Congregation for the Doctrine of the Faith during Benedict XVI’s pontificate, said in a recent interview that “what we are facing is an the attempt to genetically modify the Church.”

Asked why he believes the working document [Instrumentum laboris] for the upcoming synod has been so roundly criticized, Msgr. Bux, who now serves as theologian consulter to the Congregation for the Causes of Saints, said “in a certain sense, the answer was recently given by Pope Benedict [in an essay published after the Vatican sex abuse summit]: it is yet another attempt to ‘create another Church, an experiment already that was tried and failed.’”

“These clerics do not ask themselves the great question at the basis of Christianity: what did Jesus really bring us if — as we can see — he did not bring world peace, well-being for all, and a better world?,” Msgr. Bux said.

“Jesus Christ came to bring God to earth, so that man might find the way to heaven: that is why he founded the Church,” the Italian Monsignor said. “Instead, today’s clerics take care of the earth as if it were man’s permanent and lasting home. What is the symptom? They do not speak of the soul and therefore of its salvation.”

Msgr. Bux further noted that ideas once “denounced” by Joseph Ratzinger (as prefect of the Congregation for the Doctrine of the Faith) are now “coming to maturity” with the Amazon Synod.

“The Church is no longer considered the Mystical Body of Christ and the People of God oriented toward salvation, but a sociological phenomenon; thus it must deal with economics, ecology and politics, where at most it could intervene only for a moral judgment,” Msgr. Bux said.

He added that, under the influence of modernism, proponents of these ideas claim that “times have changed” and with them, “a new dogma” is needed. Yet he pointed out “this doesn’t answer the questions: who decided that times have changed? And is change always good?”

In the interview, which was republished on Pan-Amazon Synod Watch, Msgr. Bux also expressed concern over the working document’s downplaying of the need for faith in Christ, in order to be saved.

“Doubts that the Lord Jesus is the only Savior of mankind has been spreading in the Church since the post-conciliar period,” Msgr. Bux explained. “For some sectors of the Church, evangelisation has been reversed into ‘being evangelized,’” leading many “parishes and seminaries” to invite “atheistic or doubtful thinkers” to speak “rather than clear and definite Catholics.”

Msgr. Bux said “this has led to confusion and disorientation,” especially given the weak catechesis that many Catholics received in recent decades.

If it were not the case, he noted, “one could not explain the spectacle of vices and corruption that is gripping Italian and European society.” Nor could one explain how everyone is invited to “receive Communion at Mass, regardless of whether they are in the state of grace,” or even Catholic.

“The pastors of the Church must set forth doctrine according to the apostolic form in which it was entrusted to them (Rom 6:17),” the theologian said. “As Monsignor Carlo Maria Viganò recently replied in an interview [with the Washington Post]: ‘Dishonorably rebellious are those who presume to break or change the perennial tradition of the Church.’”

Speaking to the working document’s use of “inculturation,” Msgr. Bux said “it is presented in an inverted way: the intention is to return the Church in the Amazon to animism and spiritualism, making it withdraw from the Word that was announced to it through evangelization. ‘A natural religion with a Christian mask,’ as Cardinal Brandmüller said in his recent statement.”

Asked about the working document’s praise for the “cosmovision” of indigenous peoples, Msgr. Bux said it represents a “blurring of reason” and a return to “natural religion” and “spiritualism.”

Yet nature does have valuable lessons to teach us about the Church, the Italian theologian argued.

“The very development of nature, which happens in an organic way (so that what is false yesterday cannot be true today) should help us to understand that the Church’s teaching is a doctrinal, organic corpus,” he said.

“Instead,” he observed, “clerics are infected by a kind of Darwinism that results — as Cardinal Brandmüller wrote — in doctrinal and moral evolutionism; precisely the opposite of the organic development of a subject who remains faithful to its own identity.”

“Only this body can be called the Church, at least on the basis of the Vatican I and II Consitutions, Dei Filius, Lumen Gentium and Dei Verbum,” he said.

Msgr. Bux, who is also a liturgist, said signs of this Darwinian infection can be seen in the working document’s treatment of the sacraments, particularly Holy Orders.

“After all the pre-conciliar and post-conflict debate on the inseparability of power of order and jurisdiction,” he said, “the Instrumentum Laboris proposes the opposite in order to justify the ordained ministry for women. Thus, we move further away from the Eastern Churches.”

“Episcopal, priestly and diaconal identity must be understood from God who calls and the Church confirms it by ordination; not from the community, as if the Church were a democracy.”

Rejecting the document’s proposal to ordain married men, or viri probati, Msgr. Bux said “the history of the Church teaches that the crisis of priestly vocations is resolved through living faith: where the faith is alive, missionary vocations are born, until the emergence of institutes for the formation of indigenous clergy. The Lord always calls men to follow him!”

Regarding the working document’s proposal that the rite of Mass be adapted to local Amazonian customs, Msgr. Bux observed that the Roman Rite has been transmitted to various peoples across the world and is “an expression of the communion of all believers in Christ beyond language, nation and race.”

“While respecting cultures, the liturgy invites them to purify and sanctify themselves,” he said. “In truth,” he said, the working document’s treatment of the liturgy “is a question of an ill-concealed opposition to the Church of Rome.”

Msgr. Bux said it is “strange” that they want to do this centuries after the evangelization of the American continent, and the adoption of the Roman Rite. “Who informed the natives of the Amazon that ‘they were naked,’ i.e. without their own rite?,” he asked.

He said the proposed adoption of non-Christian customs into the liturgy is “incompatible” and “contradictory” with the Roman Rite, unless one wants to engage in “hybridization and syncretism that lead the faithful into error.”

“We are faced with the attempt to genetically modify the Church, calling into question the faith and unity of the Roman rite that expresses it (cf. Sacrosanctum Concilium nn 37-38),” he said.

In the interview, Msgr. Bux also said he finds it “incredible” that the Amazon is being considered as a “theological place,” i.e. a special source of revelation.

Seconding Cardinal Walter Brandmüller’s critique of the Instrumentum laboris, Msgr. Bux said that by calling into question divine Revelation, the document “detaches itself from the truth of the Catholic faith,” and amounts to “apostasy.”

Msgr. Bux noted said it is “significant” that the Instrumentum laboris has received the “enthusiastic approval — and perhaps the advice — of Leonardo Boff, a former Franciscan priest, a historical exponent of liberation theology who, in the 1970s, was admonished by the Congregation for the Doctrine of the Faith.”

There is no liberation without conversion to Christ. The Instrumentum Laboris never mentions this term, which is at the beginning of the Gospel of Jesus Christ, but, as cardinals, priests and faithful have already observed, contradicting in decisive points the binding teaching of the Church — that is, to which every true Catholic is bound — it can be qualified as heretical. An attack on the foundations of the faith, which reduces the Catholic religion to pure subjectivism. It almost seems that it is Jesus Christ who must convert to the new Amazonian divinity. But is this “the Catholic faith transmitted by the Apostles,” as we pray in the Roman Canon?