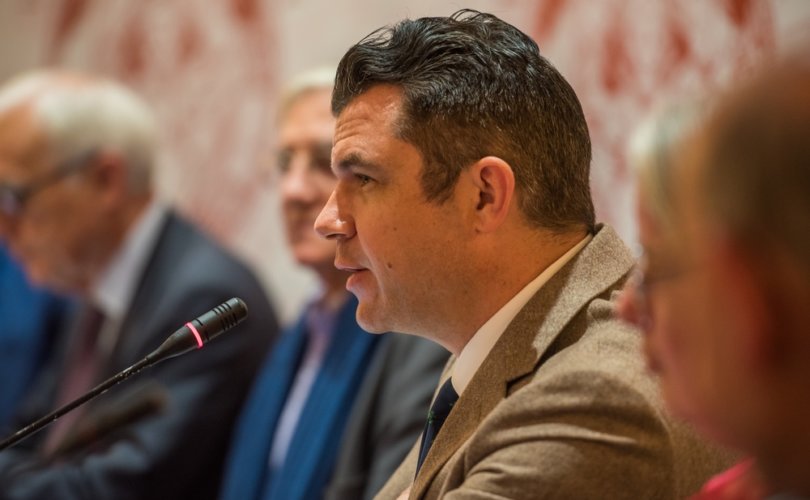 Note: On Oct. 4, 2019, Voice of the Family, a coalition of pro-life and pro-family organizations, hosted a roundtable discussion in Rome to address critical questions for the Church and for the family on the eve of the Synod of Bishops for the Pan-Amazon region. Read LifeSiteNews’s report on this event here. Below is the full address given by Dr. Taylor Marshall.

October 4, 2019 (LifeSiteNews) – Why did Pope Benedict XVI resign the papacy on 28 February 2013? And why did lightning strike the Vatican in conjunction with these events? Was it prompted by scandal at the Vatican Bank? Was it a sex scandal blotting the highest cardinals? Was it a doctrinal crisis?

All these questions and doubts coalesce when we acknowledge a substantiated and collaborated fact: Satan uniquely entered the Catholic Church at some point over the last century, or even before. For over a century, the organizers of Freemasonry, Liberalism, and Modernism infiltrated the Catholic Church in order to change her doctrine, her liturgy, and her mission from something supernatural to something secular.

Catholics are increasingly aware of a climate change in the Catholic Church.

Some point to the controversial pontificate of Pope Francis. Others highlight the confusion surrounding the surprise resignation of Pope Benedict XVI in 2013. Some are convinced that John Paul II was not whom we thought him to be. Most agree that the Second Vatican Council, the Novus Ordo Mass, and the Pontificate of Paul VI brought monumental confusion to the Catholic Church. But does the fall of the first domino begin in 1962 with the opening of Second Vatican Council?

I argue that the root of the rot extends back to an agenda put in play approximately one hundred years prior to Vatican II. It is an agenda to replace the supernatural religion of the crucified and resurrected Jesus Christ with the natural religion of humanism and globalism. It echoes the primeval choice of Adam and Eve to make themselves divine by grasping at the fruits of nature, rather than kneeling in reception of the supernatural fruit of divine grace. Lucifer also rebelled against God because in his pride he sought to ascend to the throne of God, not by sharing in the supernatural life of God, but digging deep into his own nature and reaching for the stars—and thereby falling into the abyss of Hell.

Naturalism—relying on our created nature without the aid of God—is Satanism.

The Catholic Church is in crisis because the enemies of Christ plotted an organized effort to place a Pope for Satan on the Roman Chair of Saint Peter. The enemies of Christ from Nero to Napoleon eventually discovered that to attack or murder the Pope only creates sympathy and martyrs. It is a failed strategy in every era. So instead, they sought to quietly place one of their own into the papal shoes. It would require decades, even a century to create the seminaries, the priests, the bishops, the cardinal-electors, and then even the Pope or Popes himself—but it would be worth the wait. It has been a slow and patient plan to establish a Satanic revolution with the Pope as puppet.

In a homily for Holy Mass on the feast of Saint Peter and Saint Paul (29 June 1972) and in commemoration for the ninth anniversary of being crowned as Bishop of Rome, Pope Paul VI lamented: “We would say that, through some mysterious crack—no, it’s not mysterious; through some crack, the smoke of Satan has entered the Church of God. There is doubt, uncertainty, problems, unrest, dissatisfaction, confrontation.” (1) This testimony of Paul VI acknowledges not merely that the Catholic Church had experienced secularization. Rather, he affirms that the smoke of Satan himself had entered into the Catholic Church through a crack.

The Catholic Church has been infiltrated from within and this infiltration goes back at least to the pontificate of Pope Pius IX. It is an attack on the supernatural faith, miracles, divine revelation, and upon the origin of our creation: God’s identity of male and female, the institution of human matrimony, and the natural law precept to be fruitful and multiply with marriage. Moreover, it is a resurrection of paganism “that you might become gods.”