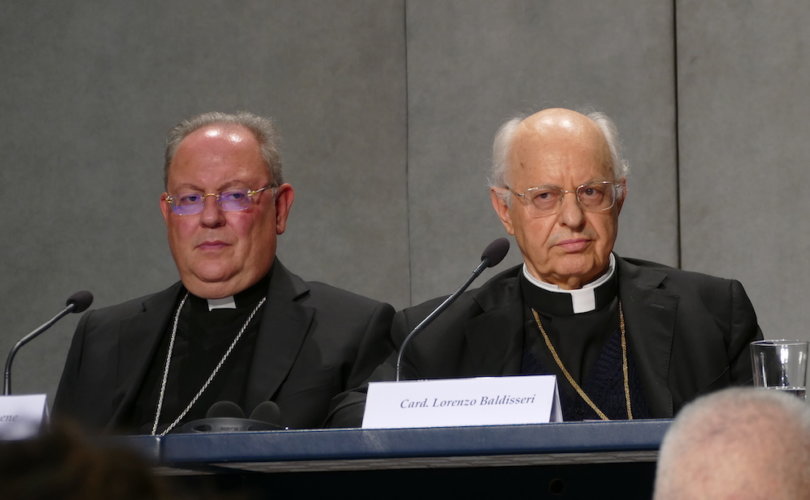 ROME, October 3, 2019 (LifeSiteNews) — Challenged to respond to the widespread criticism of the Amazon Synod working document as pagan, heretical and apostate, two key synod organizers on Thursday insisted that, paradoxically, because it is not a papal document, the text is not to be “judged,” and that it is “the voice of the people” and “the voice of the earth.”

At an Oct. 3 press conference, LifeSite asked two cardinals at the center of Amazonian Synod planning for their response to the criticism the document has received from cardinals, bishops, experts and theologians.

LifeSite noted in particular the searing critique offered by Cardinal Walter Brandmüller, president emeritus of the Pontifical Committee for Historical Sciences, who warned that “decisive points” of the working document are “heretical,” and its questioning of Divine Revelation approaches “apostasy.”

Cardinal Lorenzo Baldisseri, secretary general of the Synod of Bishops, insisted that criticism had been exaggerated and that the document, known as the Instrumentum Laboris, is the product of consultation with the Amazonian people “in the wide sense of the word,” a mysterious expression which may imply the involvement of European and particularly German theologians in the drafting of the document.

The document took years to prepare and “wasn’t put together in a bar,” Cardinal Baldisseri insisted.

Cardinal Baldisseri further downplayed criticism, claiming that in the contemporary Church, “more than in the past, there is freedom of expression.” The recently fired faculty of the Pontifical John Paul II Institute in Rome, and the bishops, priests and laity who, for fear of reprisals, anonymously issued a four-point criticism of the Instrumentum Laboris, may hold a different view.

He pointed out the Instrumentum Laboris is in the early stage of a synodal process which produces a final document, and concludes with an apostolic letter based on the final document and signed by the Pope.

These reassurances may be limited in their effect given that the various documents supposedly produced at the various synods under Pope Francis seem, at least in part, to have been prepared in advance.

Defending the document, he said the Instrumentum laboris is not a document by the synod but is for the synod, adding that “it is the voice of the Amazonian Church,” of “the people,” and indeed “the voice of the Earth.”

Elsewhere in today’s news conference, when asked if the Church is ready to discuss greater roles being given to women, Cardinal Hummes said we “must pay attention to the Holy Spirit” and that it is possible to know “what the Holy Spirit is telling us” by “listening to the voices of the people and the Earth.”

There are scriptural references to the earth crying out in agony and in vengeance but the idea that it is a conduit of divine communication is apparently unprecedented in Catholic thought.

Asked if it is “probable” that the discipline of priestly celibacy will be changed with the coming synod, Cardinal Baldisseri read n. 129 from the Instrumentumn laboris, which speaks of ordaining viri probati (i.e., married men), and said “the [Synod] fathers are free to express themselves and to discuss this topic and come up with proposals.

Pressed on how the Vatican will respond if German bishops seek to use an eventual exception to priestly celibacy in the Amazon within their own diocese, Cardinal Baldisseri said, “a bishops’ conference can express itself. They belong to the Church and are expressing themselves, like many Christians, like some cardinals express themselves. Nothing more.”