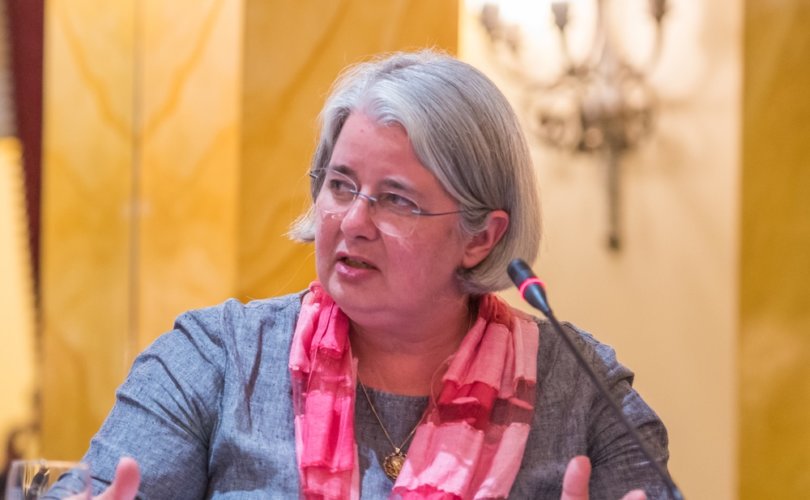 Note: On Oct. 4, 2019, Voice of the Family, a coalition of pro-life and pro-family organizations, hosted a roundtable discussion in Rome to address critical questions for the Church and for the family on the eve of the Synod of Bishops for the Pan-Amazon region. Read LifeSiteNews’s report on this event here. Below is the full address given by Jeanne Smits of LifeSiteNews.

October 4, 2019 (LifeSiteNews) – Among the most obviously threatening innovations that are being introduced by the upcoming Amazon Synod is the promotion of some form of ordained ministry for women. This is clear in the Instrumentum Laboris which wants the Church to “value and respect cultural identities,” in particular “by strengthening the community-family structure” of the Amazonian peoples. She must “promote the role of women, recognizing that fundamental functions in the formation and continuity of cultures, and spirituality, and communities and families. Women must assume a leadership role within the church,” it says.

The preparatory document published in 2018, when it referred to the shared priesthood of all the people of God and Christ proclaimed by Vatican II, spoke of the “urgent need to evaluate and rethink the ministries that today are required to respond to the objectives of ‘a church with an Amazonian face and the church with a native face’.” It said in particular that “it is necessary to identify the type of official ministry that can be conferred on women, taking into account the central role which women play today in the Amazonian church.”

Obviously, if you add “viri probati” and women as categories of people who can play a ministerial role in the Church, you considerably augment what you might call the talent pool of possible ordained ministers. But why use the Amazon to promote this? Lack of priests? We have that in so many places. The central role played by women? East and west of the Atlantic, we know how many parish activities have been taken over by women, and in rural France at least, very feminine “liturgical teams” are the dread of many a parish priest. It would seem the Amazon is no exception, so why should the Amazonian women be getting a special deal here?

In fact, I couldn't help asking myself why the Amazon is being used, rather than Western countries where gender mainstreaming and the evolution of the role of women in society, helped along by the UN, would seem to be much better arguing points. We already have girls as altar boys, after all.

The answer, you will not be surprised to hear, lies in a passing remark, and in a footnote, in the 2018 preparatory document for the Amazon Synod. It said:

“In the process of thinking a Church with an Amazonian face, we dream with our feet grounded in our origins, and with our eyes open we consider the future shape of this Church, starting from its peoples’ experience of cultural diversity. Our new paths will impact ministries, liturgy, and theology (Indian theology).[4]”

The footnote referred to the 6th symposium on Indian theology of the Latin American bishops in Paraguay in 2017.

Indian theology: the answer is there. A throw-off from liberation theology, very close to the “theology of the people” of which Pope Francis is so fond, it is defined by the importance it gives to land and community: the “Pachamama,” or Mother Earth. The feminine element is paramount.

A progressive Dominican from La Tourette in France, Alain Durand explains how it works: “Man and woman are made to live in harmony, never one without the other. The idea that a man or woman should be able to live without being linked to a person of the other sex is completely foreign to Indian culture. In liturgical ceremonies themselves, it is necessary that women should assume functions. When immediately sees what difficulty that creates regarding the access of the indigenous to the Catholic priesthood.”

So the whole point is to make Catholic liturgy more palatable from the point of view of traditional spirituality, that is pagan and immanentist, and that profoundly bears the mark of sexual duality. This is all the more necessary from the Indian point of view, because the fundamental divinity of that culture is the Mother Earth that bears life. Fr. Durand remarks that “in liturgies that imply indigenous populations, God can be invoked under the name of Father-Mother.”

“Faith in the God Father-Mother Creator” is precisely what is proclaimed a number 121 of the Instrumentum Laboris, and as Fr. Durand correctly remarks, this renewed vision of God involves acknowledging the practically divine role of Mother Earth.

Having women as ordained ministers, if not immediately as priests, is simply necessary from the point of view of Indian theology; it is within the logic of traditional indigenous spirituality, that is, paganism. Or if you want to take it a bit further: idolatry. “For all the gods of the Gentiles are devils: but the Lord made the heavens,” warns Psalm 96.

There is always a diabolical inversion in the wildest proposals of false religion. In this case, the idea is to have women participating actively, as ministers of a sort, in the Holy sacrifice of the Mass. It would be somewhat like promoting women soldiers in fighting roles. Soldiers are meant to kill enemies. Priests are meant to sacrifice the Immaculate Victim, and to lay down their own lives with Him, so that the Church, our Mother, can give us grace, that is, life. Women are meant to give life, not to kill. They share out to their children what they receive, and so does the Church.

The Amazon Synod will be arguing about the role of women in the Church, when the Church already has the most beautiful answer to that argument: the Virgin Mary. I profoundly believe that when God made the Cosmos – which means beauty – He was making a fitting earthly home and dowry for His Daughter, Mother and Bride. She is our Queen, the Queen of the universe and even the Queen of the Angels, much to Satan's discontent, since he must submit to and be conquered by a mere woman, by a mother who can communicate to us eternal life through the sacrifice of her Beloved Son.

Our vision of woman is defined by that. What more could we possibly want?