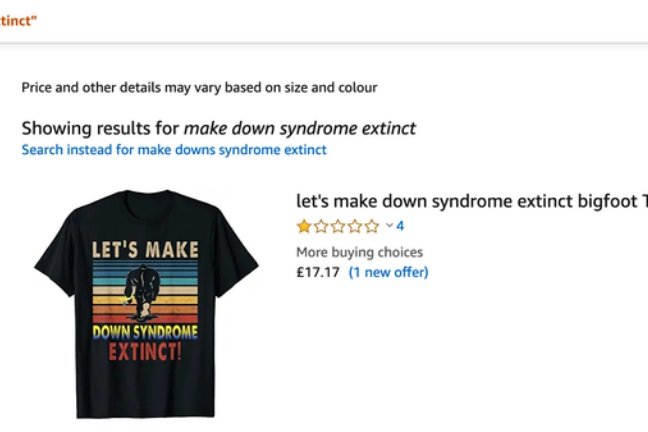 March 12, 2020 (Society for the Protection of Unborn Children) — A Scottish mother, who has a six-year old son with Down’s syndrome, has slammed Amazon for selling t-shirts which read, ‘let’s make down syndrome extinct.’ She said: “To target a group who are disabled is just disgusting.”

Stacey Corrigan, aged 34 from Paisley has a six year old son with Down’s syndrome named Daniel. Ms Corrigan slammed the t-shirt slogan as “hateful” and “disgusting”, asserting that it should be treated as a crime.

She said: “I can’t believe they have been allowed to sell this. Who even thinks up an idea to design this? Daniel is just perfect to us and we wouldn’t change a thing about him.

“They wouldn’t be able to write homophobic slogans or racists ones. It is so hateful and should be a crime. To target a group who are disabled is just disgusting and I am horrified Amazon gave them a platform to share their hate.”

The t-shirts were initially spotted by two mothers from England who filed a complaint to Amazon accusing them of promoting a hate-crime on their website.

The t-shirts have since been removed from Amazon, who have refused to comment on the situation.

In 2017, Iceland celebrated ‘eradicating down’s syndrome’ after it was reported almost 100% of unborn children diagnosed with Down’s syndrome were killed in the womb.

Such claims were criticised by SPUC who highlighted that the chromosomal condition of Down’s syndrome was not being eradicated, but rather almost 100% of the people being diagnosed with the condition were being killed.

Public Push Back Against Disability Abortion

Recent weeks have witnessed a public backlash against abortion following a disability diagnosis.

Over 1,800 people with Down’s syndrome and their families have signed a letter to Prime Minister Boris Johnson, urging him to insure than abortion for disability will not be permitted in Northern Ireland.