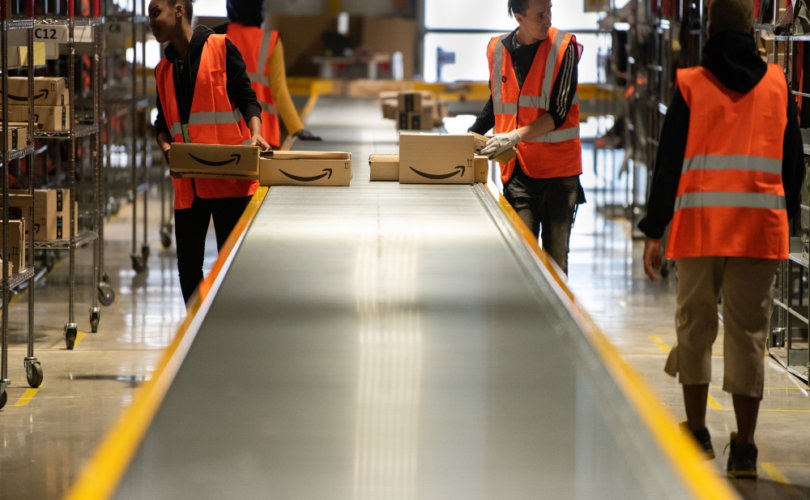 SEATTLE (LifeSiteNews) – Amazon employees sent a letter to the company Tuesday making demands in the wake of the Supreme Court’s decision to overrule Roe v. Wade that include time off to cope with the decision and that Amazon should not do business in pro-life states.

The letter, posted to Twitter by Libs of TikTok, asks Amazon to severely rebuke the Supreme Court for its decision in Dobbs v. Jackson Women’s Health, which brought abortion decisions back to the states after almost 50 years of abortion on demand.

SCOOP: Hundreds of Amazon employees signed an open letter to Amazon leadership demanding they cease doing business in states where abortion is illegal and requesting time off to grieve the Supreme Court ruling pic.twitter.com/qWSts5KAcJ

“We, the undersigned, come to you today to request immediate and decisive action against the threat to our basic human rights with the overturning of Roe v. Wade,” the letter begins. “As part of Amazon’s wide-reaching effort towards a more inclusive and diverse workforce, we believe that Amazon cannot let this recent decision go unanswered. We ask Amazon, the world’s best employer, to actively defend against this assault on our liberty.”

The letter also demands Amazon “cease operations in states that enact laws that threaten the lives and liberty of abortion seekers, either by denying health care in life threatening circumstances or by criminalizing abortion seekers and providers.”

Other demands listed in the letter include allowing employees “space and time to grieve” the ruling, that Amazon sponsor protests, that Amazon expand opportunities for remote work for employees seeking an abortion, an audit of Amazon’s political donations, donating to bail funds for women seeking abortions and abortion providers, and “a company-wide policy change going forward to ensure Amazon does not aid or abet anti-abortion causes, ideologies, groups or public figures, including via donation, product sale, public statement, or otherwise.”

The letter concludes by noting the risk that the demands would impose on Amazon but states that “these are unprecedented times.” “Given the attacks on our democracy, and the continual deterioration of our rights, we believe the time to act is now.”

Amazon announced last month that it would cover up to $4,000 in travel expenses for employees that seek out-of-state abortions. Other companies that have made similar promises include Disney, Apple, Citibank, Starbucks, Levi’s, Tesla, and DICK’s Sporting Goods. Google said that it would allow for employees to move “without justification” as a result of local abortion bans.

Amazon employees have criticized the company for not appearing to be “woke” enough in the past. Last month, several Amazon employees staged a “die-in” at a company event in protest of Amazon selling Matt Walsh’s anti-transgender book “Johnny the Walrus.” Last week, Amazon employees participating in a Pride event in Seattle criticized the company for “spreading a culture of hatred through the sale of transphobic books, promoting and profiting off of content that advocates for the abuse of transgender children.”

Abortion is now illegal in at least 10 states, including Texas, where Amazon employs 95,000 people. A 15-week abortion ban in Florida is set to take effect Friday pending a lawsuit from the American Civil Liberties Union (ACLU), where Amazon has 59,000 employees.

LifeSite reached out to Amazon for comment and has yet to receive a response.