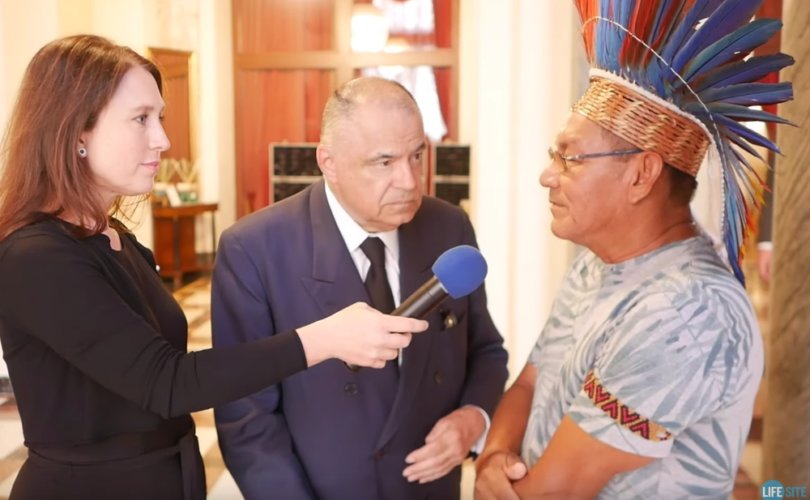 Jonas Marcolino Macuxí, the chief of the Macuxi tribe, speaks with LifeSiteNewsLifeSiteNews

ROME, October 8, 2019 (LifeSiteNews) — A controversial ceremony in the Vatican gardens on Friday, October 4, to consecrate the Pan-Amazon synod to St. Francis of Assisi, seemed to be organized by proponents of Liberation Theology and have “pagan” elements, an Amazon tribal chief told LifeSite on Saturday.

Speaking at the October 5 “Amazon: the Stakes” conference in Rome, hosted by the Plinio Correa de Oliveira Institute, Jonas Marcolino Macuxí, the chief of the Macuxi tribe, said that, in his view, the Indians who participated in the ceremony are “completely dominated by Liberation Theology people who want to take advantage of them.”

Asked if anything in the ceremony looked familiar to him as part of indigenous culture, or if it was Christian or more primitive, he said it looked decidedly “pagan.”

Marcolino, a lawyer and mathematician who was illiterate for the first 18 years of his life, until he received an education, told a packed venue in Rome that a “dictatorship” of missionary workers teaching Liberation Theology has “dismantled” the work of the first missionaries, “preached conflict,” and sought to prevent development in the region, thus keeping indigenous people in poverty and misery, with bat-filled homes and insect-eaten feet.

He also expressed concern that many of those advising Pope Francis at the Amazonian synod ascribe to the similar forms of Liberation Theology, and that indigenous representatives invited to attend it have been “indoctrinated to remain in their primitive state.”

In our interview, Marcolino, who was baptized Catholic but became Evangelical – partly due to the state of the Church in the region – said that some tribes are “still killing children who are born with defects.” He said the barbaric practice persists in part because “even the bishops in the area tell them that they have to go back to their old ways, because they are much better than the customs and way of being of modern white society.”

“I see Liberation Theology as a doctrine that does not liberate people from sin, from stealing, from lying, but liberating them from technology and other things that can promote their lives and take them away from barbarism,” the tribal leader said.