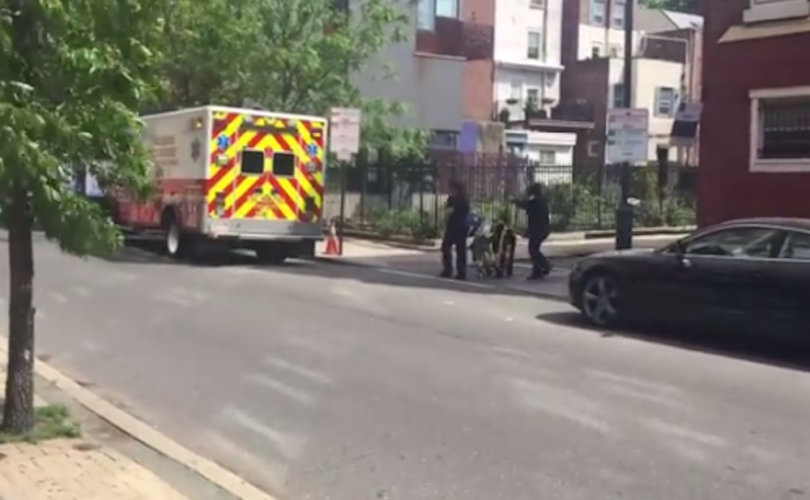 May 15, 2019 (LifeSiteNews) — Shortly after 1,000-plus pro-life advocates gathered last Friday at a Philadelphia Planned Parenthood for a rally in answer to Democratic State Rep. Brian Sims’ pro-abortion bullying of pro-life women, an ambulance arrived to transport someone at the abortion facility to the hospital.

The ambulance came to the Locust Street Planned Parenthood around 3 p.m. Friday, Operation Rescue reported, and emergency responders took a woman from the abortion facility to the ambulance in a wheelchair. The incident was captured on video.

That morning, pro-lifers had rallied there in response to Sims harassing a woman and three teenage girls in separate incidents last month as they prayed and demonstrated outside the Planned Parenthood. The Democrat lawmaker posted video on social media of himself confronting the woman and girls.

The video showed Sims continually berating the Catholic woman as she quietly prayed the rosary at the abortion facility, repeatedly calling her “shameful,” “disgusting,” “racist,” and an “old white lady.”

In the video of him harassing the young women, he calls them “a bunch of pseudo-Christian protesters who’ve been out here shaming young girls for being here,” and then offers “$100 to anybody who will identify these three.” He went on to harass a young pro-life man who was peacefully demonstrating outside the Planned Parenthood.

Philadelphia Archbishop Charles Chaput, O.F.M. Cap., termed Sims’ verbal assault of the women, and in particular Sims’ offering his video viewers money if they doxxed the teen girls, “hateful” and “unbecoming of an elected official.”

Since the rally and other backlash associated with Sims’ actions, he has gone dark on social media and on Friday public access was blocked to his office building.

As of last week, Philadelphia district attorney Larry Krasner was reviewing a request from state Republican Party chairman Val DiGiorgio to open criminal investigations into Sims for “intimidation and harassment.”

The Locust Street Surgical Center in Philadelphia is Planned Parenthood’s largest abortion site in Pennsylvania. It has a health and safety record with the state that is shocking and ongoing, having failed 13 of its last 23 patient safety inspections.

According to documents from the Pennsylvania Department of Health, among the Planned Parenthood abortion facility’s inspection deficiencies are failing to report child sex abuse, failure to determine a physical status on all patients before anesthesia or surgery, failure to provide a safe and sanitary environment, improper storage of aborted babies’ remains, failure to report a serious incident affecting a patient, and no background checks on employees.

Pro-life advocates continue to call for the largest abortion business in the United States to be defunded of roughly half-billion dollars in annual taxpayer funding and for authorities to hold all abortion providers accountable for conditions at abortion facilities nationwide.