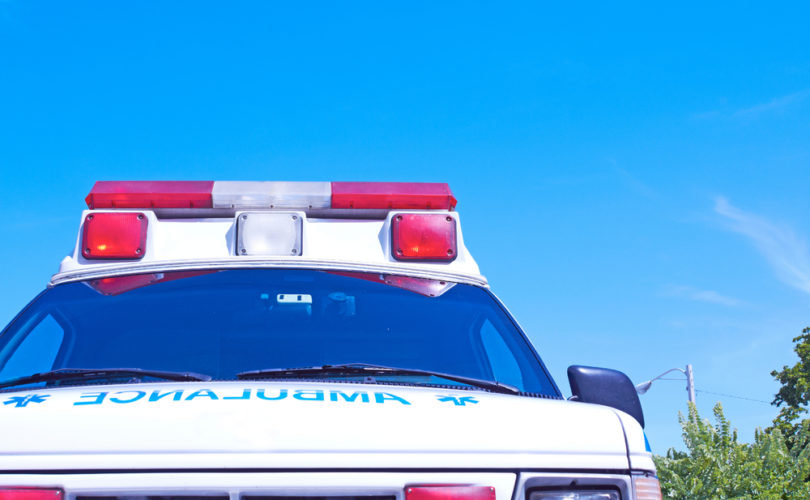 For the twenty-seventh time in the past five years, an ambulance arrived at the Planned Parenthood abortion clinic on Forest Parkway in St. Louis, Missouri, and transported a woman to a local hospital.

A mobile medical center nurse manager with ThriVe, who was on the scene at the time, snapped a series of photos of the incident, which took place between 2 and 3 p.m. on Wednesday, November 12, 2014.

“Notice no lights or sirens [were] on while the ambulance is idling and upon leaving: typical of each incident,” she reported, noting also that the ambulances’ lights and sirens are routinely turned off before they get to the Planned Parenthood parking lot.

A group of Planned Parenthood employees deployed a tan tarp to block a clear view from the street while the woman was wheeled out of the abortion facility to an awaiting ambulance.

“It is a shame that while so many are showing concern for alleged racial policies within nearby police departments, there has been no concern shown for the disproportionate racial targeting of women for abortions by Planned Parenthood, which operates in a primarily minority neighborhood in St. Louis. Neither has there been any public demonstrations of concern for the dozens of mostly African-American women whose lives are being endangered by substandard practices and facilities at Planned Parenthood in St. Louis,” said Operation Rescue President Troy Newman.

Attempts by Operation Rescue to obtain 911 records, which are usually considered public records, has been thwarted by city officials that appear to be protecting Planned Parenthood’s abortion business.

With the assistance of the Alliance Defending Freedom, Operation Rescue sued the St. Louis Fire Department in May, 2014, to obtain public information that was over-zealously redacted from 911 records it had received through the Freedom of Information Act. That case is pending.

The St. Louis Planned Parenthood is the last remaining abortion clinic in Missouri, which may explain the resistance to providing information that could potentially lead to regulatory board action that would damage or close Planned Parenthood’s abortion business.

“We consider the Planned Parenthood abortion clinic in St. Louis to be among the most dangerous abortion facilities in the country,” said Newman. “We are grateful to local citizens who have documented the long list of medical emergencies there so that the public can be made aware of the truth about the dangers of Planned Parenthood’s shoddy practices that routinely endanger the lives of women.”

Below is a list of dates that witnesses have seen ambulances transporting women from the St. Louis Planned Parenthood, some with links to further information about the emergencies.