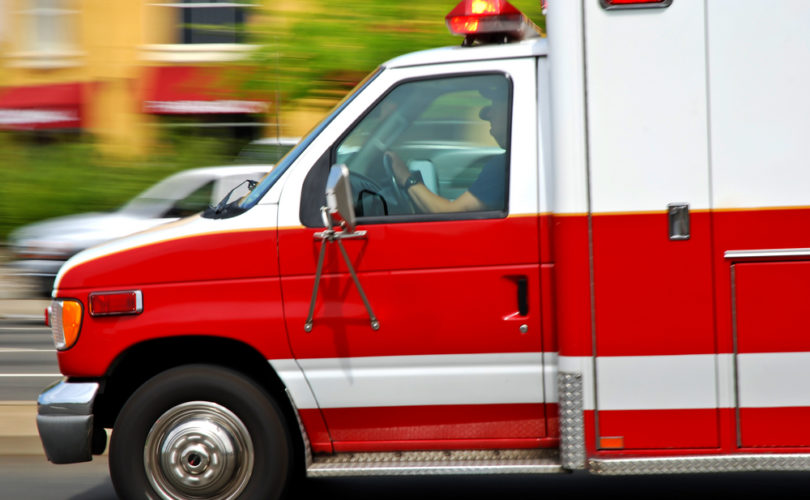 Operation Rescue was notified of the incident by the Kansas Coalition for Life, which maintains a continuous pro-life presence outside South Wind Women’s Center during business hours.

The ambulance arrived at the abortion clinic at approximately 12:35 p.m. South Wind occupies the same building that once housed George Tiller’s infamous late-term abortion business, which closed in 2009. South Wind purchased the building and reopened it as a first and early-second trimester abortion mill.

This is the first documented medical emergency at South Wind since it began operations in 2013. Under Tiller’s ownership, Operation Rescue documented over a dozen medical emergencies, including one patient death, over a five-year time span.

“It was only a matter of time before someone at South Wind suffered a medical emergency,” said Operation Rescue President Troy Newman. “With a gang of quacks like those employed at South Wind, medical emergencies are a tragic inevitability. South Wind boasts of continuing the Tiller legacy and that seems to include substandard care and incompetence.”

The ambulance crew emerged from the South Wind abortion facility at 12:58 p.m. wheeling a patient on a gurney with a towel covering her head who was receiving fluids through an IV. The ambulance then departed using a gate that opened onto Kellogg Drive that is never used except in the event of an emergency.

UPDATE 3/27/2015, 12:50 P.M.: Operation Rescue has received a Computer Aided Dispatch record from the 911 call placed by South Wind’s CEO Julie Burkhart. It indicates the patient suffered vaginal hemorrhage and required emergency transport. The CAD report also indicated that she was transported “TR/YW” for “Trauma/Yellow”. A “yellow” code indicates that lights and sirens are discretionary. However, hemorrhaging is usually considered a “red” emergency that would require lights and sirens.

Galichia is a small hospital that is affiliated with the larger Wesley Medical Center where Tiller transported all his botched abortion patients. Tiller’s clinic workers were known to request ambulances with “no lights, no sirens,” as occurred in the following clip from 2005 when an abortion patient named Christin Gilbert died of abortion complications.

“We hope this patient will be okay. We will continue to look into this incident and file whatever complaints are appropriate to protect other women from being injured by South Wind’s shoddy abortion staff,” said Newman.

Witnesses at the scene on Thursday indicated that they had reason to believe that Cheryl Chastine, who had no abortion experience whatsoever before she began working for South Wind two years ago, was on duty at the time of the medical emergency.

Operation Rescue has reason to believe that South Wind Women’s Center cannot comply with the provisions of that law and therefore would be forced to close if the law went into effect.

A hearing on the State’s motion for summary judgement in that case, Hodes v. Mosher, has been set for Friday, April 3, 2015.

“We want to see this law freed from the legal tar paper where it has been mired for four long years while women have continued to be subjected to unaccountable, dangerous abortion practices at Kansas’ three remaining abortion clinics,” said Newman. “Closing South Wind would ensure that no more women suffer there. That moment can’t come soon enough.”