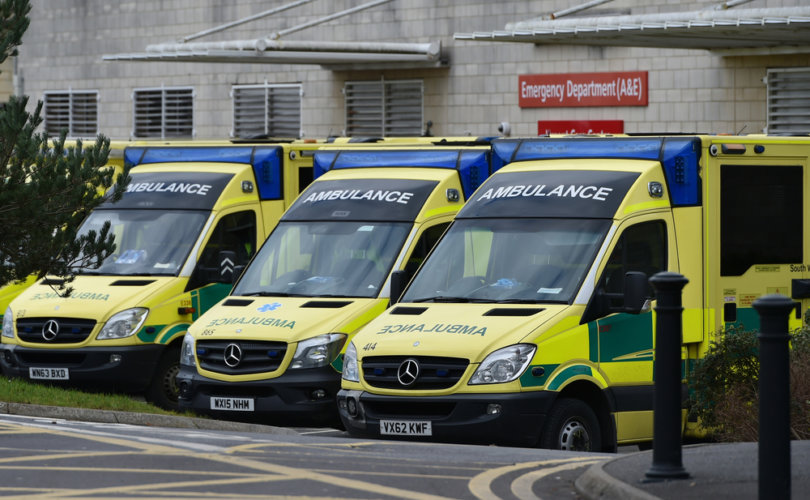 (The Daily Sceptic) – All ambulance trusts in England were put on the highest alert on Tuesday amid long waiting times of many hours in some cases as ambulances queued up outside hospitals unable to hand over patients.

“Rising COVID staff absences, the escalating heatwave, and ongoing delays in handing over patients to A&E [emergency room] have heaped extra pressure on ambulance services which were already in crisis mode.

All ten trusts have been put on a level four alert known as ‘Resource Escalation Action Plan (REAP) 4,’ which signals they are under ‘extreme pressure.’

As part of this, patients with emergencies that are not life threatening could be told to make their own way to hospital or seek alternative care – or face even longer waits than usual.

It comes amid a fifth wave of COVID infections across Britain, with 2.7 million (one in 24) people estimated to have been infected in the most recent week.

The rise of two mild but highly infectious omicron sub-strains have caused daily COVID hospital admissions to rise to a near 18-month high, with around 2,000 people being hospitalized with the virus every day. But only a fraction of these are primarily sick with the virus.

South Central Ambulance Service trust has explicitly asked people in the lowest category of callouts to find ‘alternative treatment and advice’ and to not call 999 [emergency services] back to ask about an estimated time unless the patient’s condition has changed.

The service said it was experiencing a growing number of 999 calls coupled with patients calling back about delayed responses.

Meanwhile, West Midlands Ambulance Service said it had been on the highest level of alert for a few months and told Britain’s Health Service Journal more than half of its ambulance crews were queued outside hospitals at one point yesterday.

A spokesman for the trust said one ambulance crew had to wait 24 hours to hand a patient over.

One senior leader in the north of the country, who asked not to be named, told Health Service Journal the situation was ‘dire’ for both staff and patients.

Last month, the average category one response time was 8 minutes and 36 seconds. This is 26 seconds faster than April but 96 seconds slower than the seven-minute target. Ambulances in May took an average of 39 minutes and 58 seconds to respond to category two calls, such as burns, epilepsy, and strokes. This is 11 minutes and 24 seconds quicker than one month earlier but more than double the 18-minute target. Response times for category three calls – such as late stages of labour, non-severe burns, and diabetes – averaged 2 hours, 9 minutes and 32 seconds. This is down from 2 hours, 38 minutes and 41 seconds in April. Ambulances are supposed to arrive at nine in 10 category three calls within two hours.”

The wait outside hospitals to admit patients seems to be the crucial factor, as according to official data (see below) the actual number of 999 calls isn’t higher than normal, whereas the waiting times have been very high since last summer. This timing corresponds to when the wave of non-COVID excess deaths began in the second half of 2021, a worrying trend which has resumed this spring.

The long ambulance waits despite normal numbers of calls suggest that hospitals are lacking capacity to take patients, whether due to lack of beds or staff shortages. It seems likely that this ambulance crisis is linked to the very high numbers of non-COVID excess deaths that have been accumulating since last July. This all needs urgent investigation by the government.