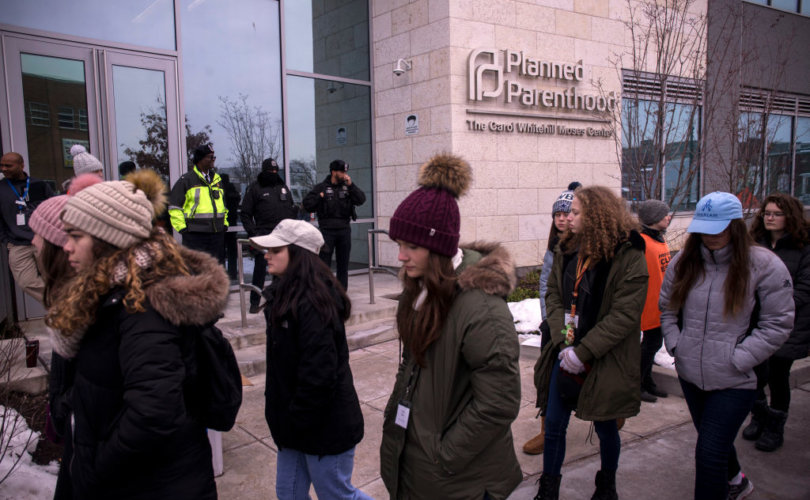 WASHINGTON DC (Operation Rescue) – Six days after the nation marked the 49th memorial of the 1973 Roe v. Wade Supreme Court decision that decriminalized abortion in America, the harm abortion causes women and their babies was sadly demonstrated in the nation’s capital.

Two ambulances responded to a medical emergency at the Carol Whitehill Moses Planned Parenthood in Metro Washington, D.C., January 27, 2022, for a woman who required emergency transport to a local hospital, apparently due to abortion complications.

Witnesses observed a woman wearing a surgical mask walking out of Planned Parenthood under her own power and being assisted into the ambulance by EMTs.

Operation Rescue was alerted to the incident as it unfolded and was provided photos and a video clip from the scene by pro-life activist Lauren Handy.

The Planned Parenthood facility bears a large banner that reads, “Black Lives Matter” – ironically over the garage entrance where yesterday’s ambulance picked up the injured women.

“That particular abortion facility specifically targets poor urban women of color for abortions, so they really do not care about the lives of back babies they destroy every day. But it’s not surprising that a business that supports Communist China-like abortion policies would also support a socialist/communist organization that divides people by race.”

Operation Rescue documents emergencies at abortion facilities nationwide. But why would two ambulances respond to an emergency involving just one woman?

Some jurisdictions have protocols that require the dispatch of two ambulances for pregnancy-related emergencies because they consider the unborn baby to be a potential second patient.

Sadly, for most abortion emergencies at facilities like Planned Parenthood, the baby is already dead by the barbaric method of dismemberment, either by suction aspiration or by forceps, long before any ambulance is ever called.

However, the protocol speaks to the humanity of the unborn baby who is considered deserving of deploying resources to save his or her life.

This incident follows another medical emergency at this same Planned Parenthood facility that took place just two months ago on November 13, 2021.

Operation Rescue was curiously told by Washington D.C.’s Office of Unified Communications that there were no records available for that incident, in which a woman was transported from Planned Parenthood by Metro D.C. ambulance.

Operation Rescue continues to investigate yesterday’s medical emergency and will post updates as they become available.

Earlier this week, Operation Rescue published a video compilation of photos, video, and 911 recordings for 64 medical emergencies it documented in 2021, including the November 11 emergency at the same Planned Parenthood facility involved in this episode. Click to watch that video.

For more information about the harm abortion causes women, visit our archive of nationwide reports at Abortion911.com.