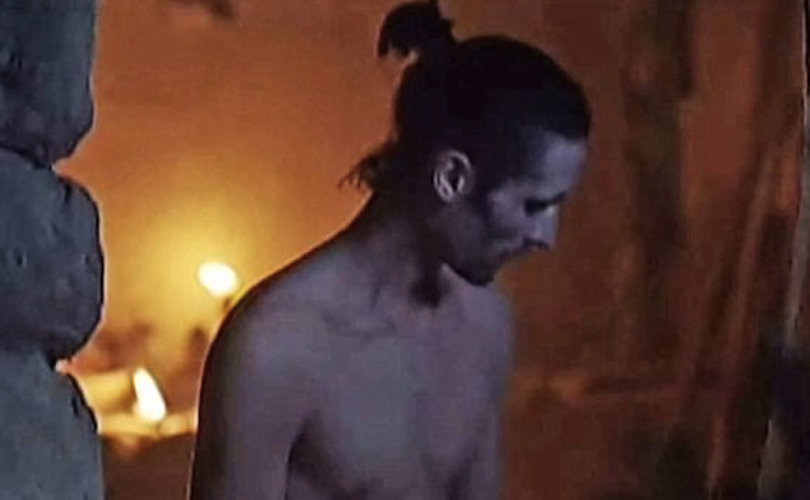 The two characters are shown in silhouette in their varied sexual positions, according to a report from Fox News, speaking explicitly and otherwise verbalizing about what’s taking place in the scene.

Later, the Christ character tells the woman to keep their encounter a secret before saying he must leave to do something for his father, referencing the Last Supper and his crucifixion.

The scene, which aired Monday evening this week, prompted outrage from Catholics and others.

“Depicting Jesus in a grotesque sex scene is an assault on the sensibilities of all Christians, as well as people of good will who are not Christians,” Catholic League President Bill Donohue in a statement. “We have been treated to this kind of fare from some pay-per-view channels, but we are not accustomed to AMC getting into the mud. If this is a signal of what it aspires to become, we will rally Christians against it.”

“Dirty Little Secret,” the second episode in the show’s second season, takes up main character Jesse Custer’s search for God. This includes his encounters with the Grail, an organization formed by the Apostle Thaddeus tasked with protecting Christ’s earthly bloodline, begun when Jesus got the woman pregnant the night before his crucifixion.

After spending its first several minutes on the flashback sex scene with Jesus, the episode moves on to further graphic blasphemy, ushered in with the Custer character asking the pope and the archbishop of Canterbury if they know where God is.

According to AMC’s episode recap, the pope’s response is that God gave up on man and created a new species, and the pope really doesn’t know. But he advises Custer that “the boy,” subsequently identified as “the Messiah,” knows.

Kneeling later before “the Messiah,” the Custer character asks if he’s on the right path in finding God, and “the Messiah” promptly urinates on him. “The Messiah” is then revealed to be a mentally handicapped man named Humperdoo, resulting from inbreeding conducted to keep Jesus’ bloodline pure in preparation for the end of the world.

In a searing review of the August 21 installment of Preacher, NewsBusters’ Lindsay Kornick wrote, “The latest episode featured a subject so embarrassingly crass that I’m shocked I got through the entire episode without slamming my head against a wall.”

After giving some details of the sex scene, she called it “so, so, so wrong,” and later branded its writers “depraved.”

Co-producer Seth Rogan wasn’t bothered by the initial pushback; in fact, he considered it to be a good thing in promoting the show. Rogan linked to the Fox News report, tweeting, “If this isn't a good endorsement of #Preacher, I don't know what is.

Rogan had admitted on Twitter ahead of the episode’s airing that he was surprised AMC allowed him to go that far, saying, “Tonight's episode of #Preacher has some stuff I've been excited to bring to life for years and I'm SHOCKED they let us do it. Please watch.”

A report from Catholic Online said, “The scene is offensive to all pious people, and is unworthy of AMC, or television.”

“In order to make a buck, Seth Rogen cast a man as Jesus and asked that actor to do a pornographic scene,” David Drudge wrote in the online publication. “Then, everyone on the show simply went along with it. This is how evil Hollywood has become. This is sick, depraved, and no good Christian should stand for it.”

“So the Messiah is the moronic, inbred offspring of Jesus Christ, and he pees on people,” the report said. “How edgy. We at TruthRevolt look forward to the day when AMC dares to produce a program in which the Islamic prophet Muhammad is so vilely portrayed.”

Preacher is based on a popular cult comic book franchise of the same name, AMC’s program synopsis says, calling it “an absurdly twisted and action-packed thrill ride.”

While mocking Christianity is part of the course material, according to Christian Post, some viewers still weren’t impressed with this episode’s embodiment of Preacher.

“Glad I quit @AMC_TV's trashy #Preacher early this season,” one view said on Twitter. “S**t like this – not even in the comics it's based on!”

“Disgusting,” tweeted another. “I’m not watching this show anymore after last episode and unfollow.”

“AMC’s “Preacher” is 100% false & disgusting,” said a third. “It supposedly shows Jesus’ life but is so bad I’d feel dirty sharing even a critical link.”

“I think #Preacher may have lost me, last night,” another tweeted. “That was taking things a little too far. Felt really uncomfortable watching.”

The American Family Association’s One Million Moms initiative is demanding an apology from AMC. The petition can be accessed HERE.