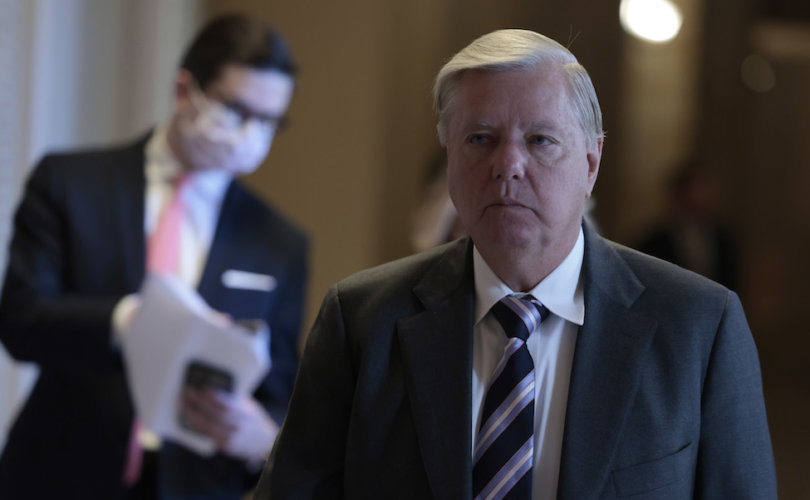 WASHINGTON (LifeSiteNews) — Four Republican senators doomed an amendment that would have banned funding for the Biden administration’s COVID vaccine mandates by failing to show up for a vote last week.

Sens. Lindsey Graham of South Carolina, Richard Burr of North Carolina, Jim Inhofe of Oklahoma, and Mitt Romney of Utah missed a vote Thursday on Utah Sen. Mike Lee’s amendment to a government spending bill that would have defunded the remaining federal vaccine mandates, including for healthcare workers.

With New Mexico Democrat Sen. Ben Ray Luján out after a stroke and two other Democrats away with “family emergencies,” Republicans temporarily held a narrow majority in the Senate, The Epoch Times reported. But the amendment failed 46-47 without the four missing Republicans’ support. A majority vote would have passed the amendment. The Senate on Thursday also rejected an amendment by Sen. Ted Cruz to prohibit federal funding for schools or daycare programs that require COVID-19 shots.

Democrat Sens. Joe Manchin and John Tester, who voted for a resolution in December introduced by Cruz to repeal Biden’s vaccine mandate for private businesses, voted against Sen. Lee’s amendment, along with all other present Democrats. The Supreme Court struck down the mandate for businesses last month.

The Democrat-controlled House never took up Cruz’s measure and would have been unlikely to pass Lee’s amendment.

GOP Senate Minority Whip John Thune of South Dakota acknowledged ahead of the votes last week that some senators would be leaving D.C. for the annual Munich Security Conference, according to The Epoch Times. “We don’t have a lot of control over that,” he said.

Daniel Horowitz, senior editor at The Blaze, slammed the four Republicans for “thinking that they had something more important than defeating sickening mandates on human bodies. If they don’t want to be there for the most important votes, they should resign.”

On Mandates… Lee Amendment dies 46-47. Now 1) not one Republican should vote to fund this government continuing mandates against the people – hold them accountable. 2) The 4 Republicans who were absent need to be identified and embarrassed. #DefundVaxMandates

“Robert Califf’s confirmation to lead the FDA paves the way for permanent authorization of mail-order abortion drugs, at a dire cost to women’s health and safety and the lives of countless unborn children,” said Marjorie Dannenfelser, president of the Susan B. Anthony List.

Both Romney and Burr, along with Sen. Graham, previously drew fire for voting in favor of Biden’s pro-LGBT infrastructure bill in August. Graham has emerged as a top GOP ally of the Biden administration in recent months, repeatedly helping to install the White House’s far-left judicial nominees.