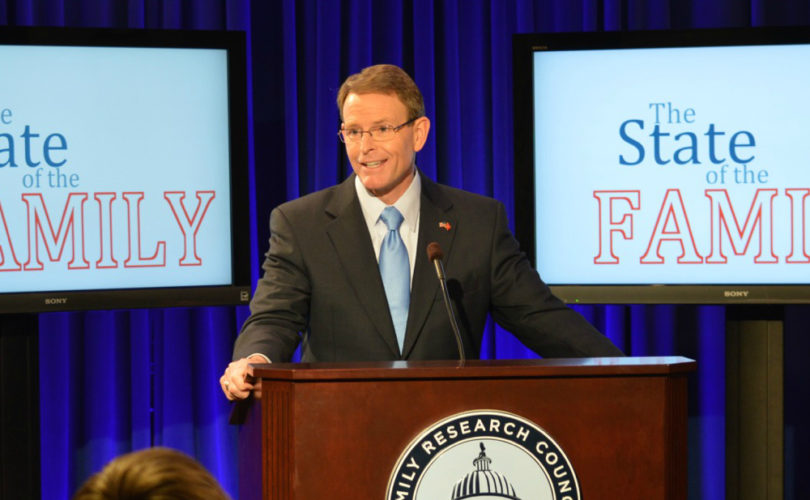 WASHINGTON, DC — America faces an “unprecedented crisis” because of the government-led assault on constitutionally guaranteed religious freedom and because of an overall assault on marriage and the family, the president of the Family Research Council, Tony Perkins, said in his State of the Family address last night in Washington, DC.

“Tonight, in the United States of America, the consensus about religious liberty that we have long enjoyed is being chipped away at with each rap of the gavel of an activist judge or human rights tribunal,” he said.

Perkins called religious freedom “essential” to citizens, families, and even democracy itself since it “promote[s] the view that all humans have dignity.”

“Therefore, when religious freedom is devalued, the worth of individuals, families, and ultimately our democracy are undermined,” he said.

He distinguished “freedom of worship” from “religious freedom,” saying that by the former phrase, those in high government positions are attempting to “quarantine orthodox faith within the four walls of our church buildings” in order to keep faith out of the public square. But religious liberty “proceeds from and informs the core of the human being,” he said.

If America is to remain a “nation of liberty,” he said, the First Amendment guaranteeing the free exercise of religion, “must remain at our country’s heart.”

Perkins pointed to historical examples of nations such as Nazi Germany and Communist China, which experienced the “catastrophic cost of established irreligion” after a successful campaign to officially jettison God.

America is in the process of jettisoning God in the name of an “unrestricted sexual license—a new Cultural Revolution—gone mad,” he said.

Present at the event were several families who have experienced first hand the loss of freedom because of their religious beliefs regarding the sanctity of life or regarding marriage as being between a man and a woman.

“Government entities are seeking to force small business owners to actively participate in ceremonies that violate their moral conscience,” he said, pointing to a family in the audience who suffered a loss of livelihood for refusing to bake a wedding cake for a homosexual couple.

“A government able to bankrupt people for standing by their beliefs, on marriage or any other matter of conscience, is a government of unbridled power and a threat to everyone’s freedom,” he said.

“The punishments being meted out by our government against those who continue to believe the same as President Obama did up until two years ago, that marriage is a union of a man and a woman, are designed to demand that Americans ‘Get in line or else lose their ability to make a living.’”

Perkins said that the “warning signs are all around us” of “an unprecedented crisis for our country.”

“Our economy stagnates under heavy taxes and regulation of this administration. Our health care system is in shambles, shackled by government mandates and assaults on the doctor-patient relationship. Marriage is disappearing among the middle-class as out-of-wedlock births reach an all-time high of 41%. Racial tensions are growing.”

“And according to a new poll in the Military Times, President Obama, our Commander-in-Chief, has the approval of only 15% of the troops who serve under him, an astonishing figure….At the same time, distrust of government is rising. Each of these issues is urgent. But taken together, they constitute an unprecedented crisis for our country,” he said.

“America stands at a point in history where we must see a spiritual, moral and cultural renewal in our nation. We call upon Christians across this nation to pray and to act.”

As hundreds of thousands gather to march for life in the nation’s capital this week, Perkins called on Congress to enact the Pain Capable Unborn Child Protection Act, which would ban abortions past the point where science says an unborn child can feel pain (about 22 weeks), except in cases of rape, incest, and a risk to the life of the mother.

He also called on Congress to pass the No Taxpayer Funding of Abortion Act which would prohibit taxpayer funding of abortion in every federal program.

Perkins closed his speech with a plea for action.

“We must choose to not be silent or retreat into isolation in our churches or insulation of our homes in the face of the threatening winds of intolerance and irreligion.”

“Let us join together in a renewed pledge to ensure that America remains, one nation under God, where faith, family and freedom flourish,” he said.