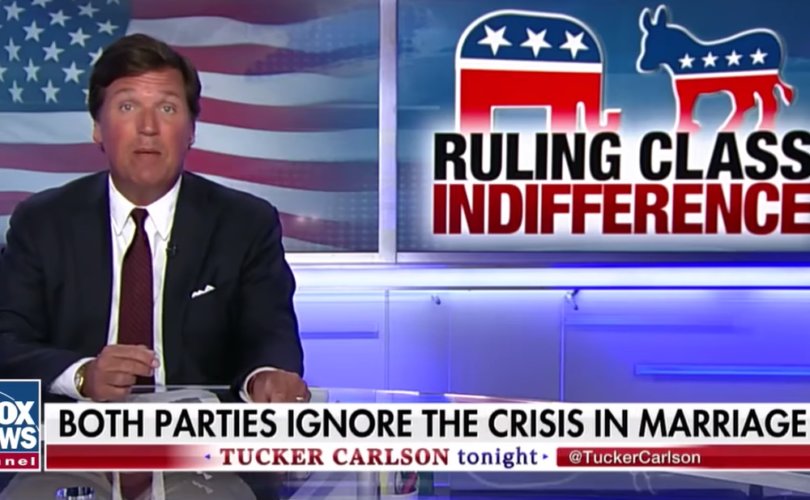 Carlson, eponymous host of Fox News show Tucker Carlson Tonight, began by responding to an attack Mitt Romney recently made on President Donald Trump in the Washington Post. Carlson’s overarching message was that power struggles between American plutocrats are irrelevant compared to their indifference to the vast majority of Americans.

“We’re ruled by mercenaries who feel no long-term obligation to the people they rule,” the TV host said. “They have no skin in this game, and it shows.”

“They can’t solve our problems,” he continued. “They don’t even bother to understand our problems.”

Carlson wondered aloud what kind of America our grandchildren will inherit.

“What kind of country will it be then? How do we want our grandchildren to live?” he asked. “Those are the only questions that matter.”

“But is that still true?” he demanded. “Does anyone still believe that cheaper iPhones or more Amazon deliveries of plastic garbage from China are going to make us happy?”

“They haven’t so far,” the host continued. “A lot of Americans are drowning in stuff, and yet drug addiction and suicide [are] depopulating large parts of the country.”

“Anyone who thinks the health of a nation can be summed up in GDP is an idiot,” Calson flatly stated.

The host said that the goal for America was “both simpler and more elusive than mere prosperity”: happiness.

“There are a lot of ingredients to being happy,” he said. “Dignity, purpose, self-control, independence – above all, deep relationships with other people. Those are the things that you want for your children. They’re what our leaders should want for us and would want if they cared. But our leaders don’t care.”

If they did care, they would insist that the American economy serve American families. Carlson devoted the bulk of his speech to arguing that “culture and economics are inseparably intertwined” and that this is key to helping American families stay afloat.

Saying that the evidence is “overwhelming,” Carlson compared the blighted urban cities of the 1980s to the woeful situation of rural America today.

“In many ways rural America now looks a lot like Detroit,” he said. “Rural people are white conservatives, mostly. Yet the pathologies of modern, rural America are familiar to anyone who visited downtown Baltimore in the 1980s: stunning out-of-wedlock birth rates, high male unemployment, a terrifying drug epidemic. Two different worlds, similar outcomes.”

The ruling classes aren’t interested in how this happened, Carlson alleged, because “they don’t have to be.”

“It’s easier to import foreign labor to take the place of native-born Americans who are slipping behind,” he continued.

“But Republicans now represent rural voters. They ought to be interested.”

Carlson noted some of the consequences of a decline in male wages.

“Manufacturing and male-dominated industry all but disappeared over the course of a generation,” he said. “All that remained were schools and hospitals, and both of them are traditional employers of women. In many areas, women suddenly made more than men.”

But as women don’t want to marry men who make less than them, this has led to a decrease in marriage and an increase in out-of-wedlock births, drug and alcohol abuse, higher incarceration rates, and fewer families formed for the next generation.

“This is not speculation,” Carlson stated. “This is not propaganda from the evangelicals. It’s social science. We know it’s true. Rich people know it best of all. It’s why they get married before they have kids. That model works.”

The host then blasted these elites for their indifference to helping the poor get married and stay married, for all their concern for the poor of the developing world.

‘Families’ are ‘the building block of everything’

“This is negligence on a massive scale,” Carlson stated. He added that both political parties as well as cultural influencers are ignoring this crucial “crisis in marriage.”

“Our mindless cultural leaders act as though it’s still 1961, and the biggest problem American families face is that sexism is preventing millions of housewives from becoming investment bankers or Facebook executives.”

After blasting the notion that the first duty of Americans workers is to shareholders, not their own children, Tucker took aim at “the ugliest parts” of the American financial system.

“Not all commerce is good,” he said. “Why is it defensible to loan people money they can’t possibly repay, or charge them interest that impoverishes them? Payday loan outlets in poor neighborhoods collect 400 percent annual interest. Are we okay with that? We should not be.”

“Libertarians tell us, ‘that’s how markets work: consenting adults making voluntary decisions about how to live their lives,’” he continued. “Okay. But it’s also disgusting. If you care about America, you ought to oppose the exploitation of Americans, whether it’s happening in the inner city or on Wall Street.”

“If you really loved your fellow Americans, as our leaders should, it would break your heart to see them high all the time – which they are. A huge number of our kids, especially our boys, are smoking weed constantly,” Carlson said, commenting on America’s drug epidemic and “tax-hungry politicians” who eagerly legalize marijuana. “‘Oh, but it’s better for you than alcohol,’ they tell us. Maybe. Who cares? Talk about missing the point. Try having dinner with a 19-year-old who’s been smoking weed. The life is gone: passive, flat, trapped in their own heads. Do you want that for your kids? Of course not.”

After discussing affirmative action, Carlson continued, “We tax capital at half the rate we tax labor. It’s a sweet deal if you work in finance, as many of our richest people do.”

“No wonder Mitt Romney supports the status quo,” Carlson said. “But for everyone else, it’s infuriating.”

“Unfairness is profoundly divisive,” he continued, and suggested that this itself is in the ruling classes’ interests.

“What country do we want to live in? A country that actually cares about families, the building block of everything,” he continued.

“Any economic system that weakens and destroys families is not worth having.”

The host acknowledged that Republican leaders would have a hard time internalizing everything he had just said, but he had no hope whatsoever that Democrats would do anything to solve America’s most pressing problems. To his fellow conservatives, he repeated his central thesis: America is its families.

“If you want to put America first,” he concluded, “you’ve got to put its families first.”