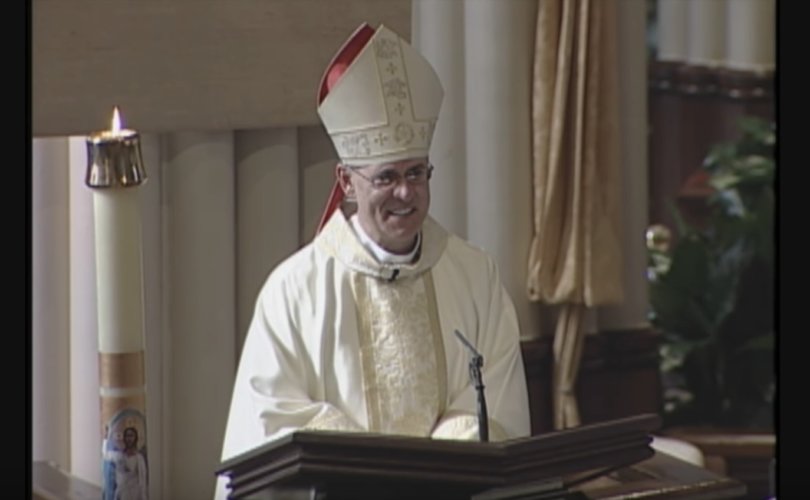 SOUTH BEND, Indiana, September 14, 2018 (LifeSiteNews) – An Indiana bishop has been exonerated of suspicions of sexual misconduct after a “swift and thorough” investigation by a Pennsylvania District Attorney.

The subject of an “unsubstantiated allegation,” Bishop Kevin C. Rhoades of the Diocese of Fort Wayne-South Bend has been exonerated by Dauphin County District Attorney Francis T. Chardo.

In a statement released yesterday, Chardo declared, “After a full investigation, the Dauphin County District Attorney has determined that there is no basis to conclude that Bishop Kevin C. Rhoades ever engaged in a criminal or otherwise improper relationship with a person whom we will refer to as J.T. to protect the privacy of his family.”

J.T., who died in 1996, was a 19-year-old inmate of Dauphin County Prison when he first met  Rhoades. Then a parish priest in Harrisburg, PA, Father Rhoades had been asked to visit J.T. in prison by one of his parishioners, J.T.’s mother. When J.T. was released on parole in 1990, he began to spend time at Rhoades’ parish. When Rhoades planned a trip to Puerto Rico with a teacher friend, J.T. asked if he could tag along to visit his grandmother there.

Detectives interviewed J.T.’s mother, whose recollections matched those of Bishop Rhoades. She confirmed that J.T. was over 20 when he travelled to Puerto Rico with Father Rhoades, and that she “never had any indication of sexual contact between J. T. and Father Rhoades.”

The reason for the investigation was an allegation made by one of J.T.’s cousins to the Diocese of Harrisburg in south-central Pennsylvania.

“The cousin reported his recollection that Father Rhoades had travelled with J.T. to Puerto Rico twice and South America once when J.T. was 13 or 14 years old,” Chardo explained.

“The cousin did not witness any sexual or unlawful acts and did not receive information relating any such acts from any source. The cousin merely thought the conduct he remembered was odd and so he felt compelled to report it. The Diocese promptly forwarded the report to the Dauphin County District Attorney.”

“The report relating to multiple trips was the result of an honest, mistaken recollection and the passage of nearly three decades,” Chado ruled. The only trip had been the one to Puerto Rico.

The district attorney deplored that the investigation had been leaked to the media and thus made public, leading to unwonted suffering.

“This has been a case of a public airing of mere speculation of impropriety with no foundation,” he wrote.

“In this case, the leaking of what turned out to be an unfounded report did unnecessary harm. This has done a disservice to actual victims of sexual abuse. It has also caused significant and unnecessary harm to Bishop Rhoades.”

A statement from the Diocese of Fort Wayne-South Bend expressed appreciation for the “swift and thorough investigation into the unsubstantiated allegation against Bishop Kevin C. Rhoades.” It underscored the importance of due process when investigating allegations of sexual misconduct.

“While it’s important that allegations be brought forward, it’s equally important for due process to take place,” the statement stressed. “The result of this investigation underscores the importance of allowing appropriate authorities to determine credibility of accusations before the reputation of any individual is impugned in the court of public opinion.”

The statement expressed Bishop Rhoades’ gratitude for the support he has received from parishioners and solidarity with those who have been abused. Reflecting on having been wrongfully accused, Rhoades said, “I have offered up the pain of this difficult time for the victim survivors of child sexual abuse.”

Bishop Rhoades has been the Ordinary of the Diocese of Fort Wayne-South Bend since 2010, having previously been appointed Bishop of Harrisburg in 2004 by St. John Paul II. In recent years, Rhoades has reinforced the authentic Catholic identity of diocesan schools and defended the traditional pro-life ethos of both St. Mary’s College and the University of Notre Dame.