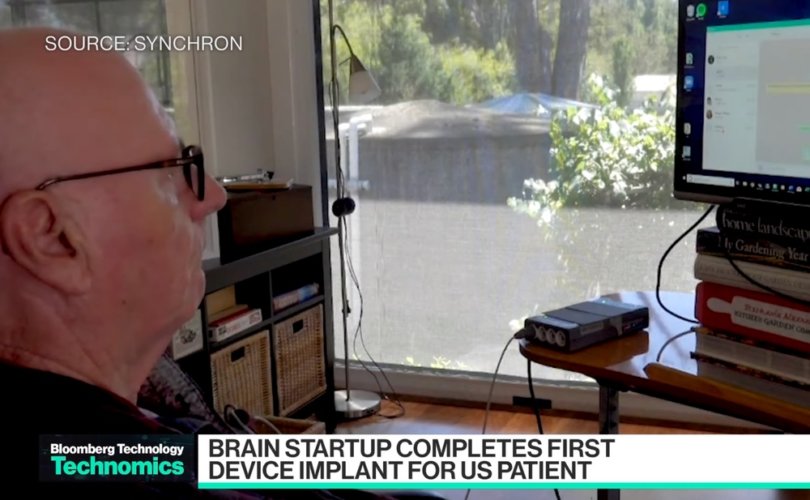 (LifeSiteNews) — The first American has been implanted with a brain-computer interface (BCI), which is designed to enable computer commands using only the mind. BCI is a pillar of transhumanism.

A patient suffering from the fatal neurodegenerative disease ALS (amyotrophic lateral sclerosis), who can no longer move or speak, is now testing the ability of a BCI called a Stentrode to translate their thoughts into commands by which they can communicate and surf the web on a computer.

The U.S. patient is the fifth person in the world to be implanted with a BCI, likened to a “brain bluetooth,” as part of the company Synchron’s COMMAND trial for the device, after the U.S. Food and Drug Administration (FDA) granted its first investigational device exemption (IDE) for a permanent BCI implant.

The other four COMMAND trial participants are in Australia, and have used the Stentrode for a year to successfully perform basic tasks like email and online shopping, reportedly without serious adverse effects.

Synchron has published a video of an Australian participant using its BCI to navigate a computer.

COMMAND Principal Investigator David Putrino, Ph.D., explained that what sets the Stentrode apart from previously explored BCI technologies is its practical usefulness. That is, it can be used outside of a lab.

“I was not particularly impressed with the ability of the current brain-computer interface technology to make a meaningful impact on someone’s life mainly because most of the technologies that we were working with do not really leave the lab,” Putrino told Psychology Today.

He explained that a BCI called a Utah Array could also be implanted, “but you could only use that array in the lab environment. When you got home, the brain-computer interface is switched off.” When he discovered Synchron and saw how it could “move straight into independent home use,” he reached out to Tom Oxley, M.D., CEO of Synchron.

According to Psychology Today, the Stentrode is situated in a large blood vessel between the two hemispheres of the brain, and is plugged into an apparatus in the chest that can be charged by an external unit.

“An external receiver connected to the chest device transforms the brain activity into commands and wirelessly transmits the commands to a computer,” explained the e-magazine. The BCI thus enables the user to carry out a wide range of functions on external devices, including writing and online banking.

The U.S. trial, which plans on including six more participants, aims to assess the safety and effectiveness of the implant in individuals with disabilities even more severe than those of the first COMMAND trial participants in Australia, who “were not completely paralyzed.”

Putrino explained, “When you’re first testing out something, you want people to be able to easily communicate with you if something is not feeling quite right or going wrong.”

In the U.S., by contrast, trial participants who have paralysis in all four limbs, and who “will likely have no other mode of verbal communication” are being selected, according to Putrino.

“It’s a little bit more challenging, but we will learn about the true utility of the technology,” he claimed.

Elon Musk is also developing a rival BCI implant called Neuralink, which has already successfully enabled a monkey to play the computer game Pong with the mind only.

READ: Mark of the beast? Thousands of Swedes become microchipped

It was reported Friday that Musk has reached out to Synchron to discuss a potential investment or collaboration as his own Neuralink implant lags behind in progress, without FDA approval for human trials.

While current BCI development is mainly focused on assisting people with neurological problems, some are predicting that such brain implants will come to pervade society the way other tech advances have.

In a 2016 interview with Swiss broadcasting group RTS, World Economic Forum (WEF) founder and chief, Klaus Schwab said that brain chips would be widely introduced “certainly in the next 10 years.”

WEF contributing author Kathleen Philips recently predicted that chip implants — which she described as a form of “augmentation technology” — will “evolve into a commodity.”

According to Philips, augmentation technology “goes hand in hand with an evolution from health care to ‘well care’, where it’s not just about solving an impairment anymore,” but is about tech that “improves your overall quality of life.”

On a May 2020 Joe Rogan podcast show, Elon Musk also affirmed that while the “first few versions” of BCI implant technology would focus on solving brain injuries, he believes implant usage would expand to allow the general population to “telepathically” communicate with each other within “five to ten years” if progress went smoothly.

Musk has previously explained that “the point” of a BCI like Neuralink is to prevent humanity from becoming obsolete in the face of the superior capacities of artificial intelligence (AI).

Meanwhile, in Sweden, microchips have been placed under the skin of thousands of people to aid them in financial transactions, traveling on trains, and opening locks on doors, as LifeSiteNews reported in 2019. In 2021, a Swedish biohacker began promoting the use of microchips as a way to record EU COVID certificates.