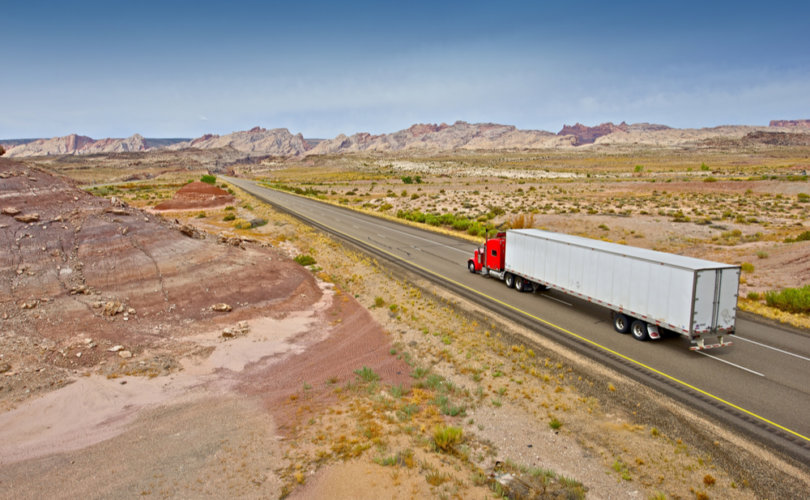 (LifeSiteNews) — American truck drivers are reportedly planning to follow the lead of their Canadian counterparts by staging a coast-to-coast convoy from California to Washington, D.C., to protest lockdowns and mandatory COVID jabs.

The news comes as thousands of Canadian truck drivers have taken part in a more than 40-mile-long convoy to protest coercive COVID-19 measures, including lockdowns and jab mandates.

The trucker convoy arrived at its destination on Parliament Hill in Canada’s capital city of Ottawa over the weekend. The truckers earned the support of tens of thousands of Canadians and the harsh rebuke of Canada’s pro-mandate Prime Minister Justin Trudeau, who fled to an undisclosed location just before the truckers descended upon Ottawa citing exposure to COVID-19, later announcing he had tested positive for the virus despite being triple-vaccinated.

Now, Canada’s so-called Freedom Convoy has inspired a group of thousands of American truckers who have banded together via a Facebook group called “Convoy to DC 2022.”

According to the group’s Facebook page, the American convoy is planning an ambitious trek from California across the continental United States to the nation’s capital in Washington, D.C.

The group has already gained a strong following, accumulating well over 100,000 members.

“We support our freedom. Help us spread the word about this group and together we all can make it a better place. God Bless America,” the group stated on its Facebook page, calling itself one of “many large groups who believe in our founding fathers.”

Industry publication The Trucker noted that “[l]ike their Canadian brothers and sisters up north, those involved in the budding American protest say they are against current vaccine mandates that require truckers to show proof of vaccination in order to cross the border between the U.S. and Canada and vice versa.”

In a video message published to social media, one of the group’s organizers, U.S. truck driver Brian Base, said he’s very supportive of the Canadian truckers and emphasized that the group isn’t about political affiliations or even national identity, but rather a shared love for liberty.

American truckers are following Canada’s lead. Brian Brase is one of the organizers of the “Convoy to DC 2022.” The Facebook group has flown past 110k people: https://t.co/pB4zjFMWPv #convoytodc #convoytodc2022 pic.twitter.com/C7qSLUECDh

While explaining that the DC convoy will be an American one, Base said it’s meant to be part of a worldwide movement for freedom.

“That’s really what this is,” he said. “It’s not about necessarily just the American convoy, it’s about a movement across the globe to stand up to our governments as individuals, as people, and our rights, especially when it comes to healthcare, as an individual.”

“Your constitutional rights don’t stop just because there’s a pandemic of some sort,” he said.

In his video message Base welcomed vaccinated and unvaccinated truck drivers alike to take part in the convoy, noting that the ability to choose for oneself is the ultimate matter at issue.

It remains to be seen whether the American truckers will succeed in their ambitious multi-thousand-mile trek, and what reception they will receive if they do.

It appears likely that many Republican politicians will support the American truckers, given their public praise for the Canadian convoy.

During a Saturday rally in Texas, former president Donald Trump commended the Canadian truckers for “doing more to defend American freedom than our own leaders.”

On Tuesday, Florida’s popular Republican Gov. Ron DeSantis tweeted out his support for the Canadian convoy with the message “Truck Yeah.”

While the organizers of the American trucker convoy have not yet announced a start date for the protest, they have indicated they intend to kick it off soon.