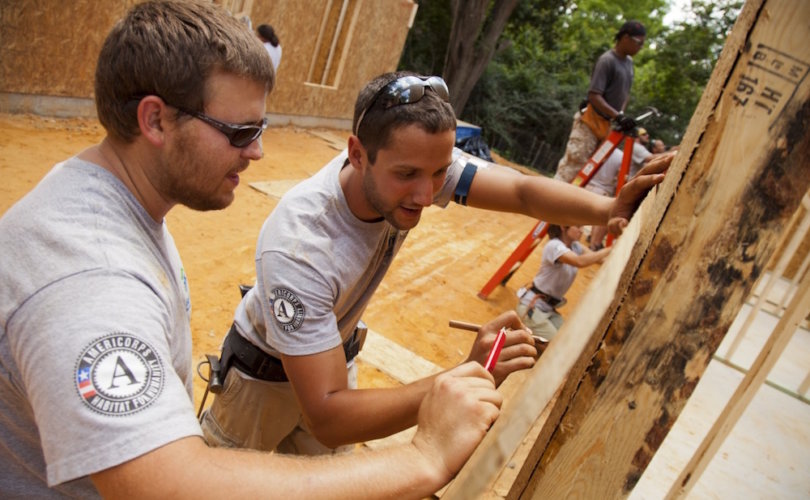 “Between 2013 and 2015, the National Association of Community Health Centers (NACHC)…allowed a few AmeriCorps members to provide emotional support (doula care) to women during abortion procedures at three New York City clinics operated by the Institute for Family Health (IFH),” according to a new report released today by the Office of Inspector General of the Corporation for National and Community Service (OIG-CNCS). The report notes, “The Edward M. Kennedy Serve America Act (the Serve America Act), the Federal statute authorizing the AmeriCorps program, expressly prohibits the use of AmeriCorps resources to 'provid[e] abortion services or referrals for receipt of such services.'”

Yet a major Americorps grant recipient, the National Association of Community Health Centers (NACHC) authorized six Americorps “volunteers” to carry out their work with the abortion facilities, the report says.

The OIG found that NACHC's “senior management” covered up multiple “instances of waste, fraud and abuse” within the program.

The CNCS issued a statement saying it is “deeply disappointed” that the NACHC “authorized national service participants to perform prohibited activities…The grantee broke the law and violated the spirit of national service.”

However, this is not the first time Americorps, the national service initiative created by President Bill Clinton, has seen its members illegally take part in abortion-related activities.

The report notes that the NACHC had always played fast-and-loose with the rules. It “disregarded the direction of CNCS’s General Counsel in 2010 to include in its training materials and member agreements the abortion prohibition precisely as stated in the Serve America Act,” the report states. “Instead, NACHC adopted a narrower restriction.”

In 2011, investigators discovered that two Americorps members had completed nine months of “service” at a Planned Parenthood in New York City. Their actions allegedly violated federal laws prohibiting Americorps volunteers from “attempting to influence legislation” and “organizing or engaging in protests, petitions, boycotts, or strikes.”

Following the incident, then-acting CEO of CNCS, Robert Velasco II, testified before Congress that CNCS would “continuously improve our accountability” by “instituting new practices in the prevention, detection, and enforcement of prohibited activities.”

Critics say the latest incident proves that more needs to be done.

“I am outraged by the terrible misuse of taxpayer dollars under the direction of the National Association of Community Health Centers,” said Rep. Tom Cole, R-OK. “Abortion-related procedures should never be funded by taxpayers. Given these disturbing developments, I believe this grantee should be immediately terminated from the HealthCorps program.”

Rep. Diane Black, R-TN, said she was personally hurt by today's revelation that the abortions took place in federally qualified health centers, another potential violation of the law.

“I have long highlighted the work of our nation’s community health centers as an alternative to the big-abortion business of Planned Parenthood and its related groups,” Congresswoman Black said. She said she is “heartbroken” to learn that the NACHC “allowed AmeriCorps volunteers to promote abortion in violation of federal law. NACHC didn’t just break the rules; they broke trust with the American people.”

After multiple breaches of federal law relating to abortion over several years, “extraordinary measures would be required to restore confidence in NACHC’s ability to manage the substantial federal funds entrusted to them,” the new OIG report says.

Others say the problem is not restricted to one grant recipient. Americorps pays participants an annual stipend of approximately $13,000 plus health care insurance to “volunteer” in government-approved causes for up to a year. Afterwards, they receive a scholarship for the full amount of the Pell Grant.

Critics say the volunteers are little more than politically active bureaucrats, paid at taxpayer expense. Citizens Against Government Waste (CAGW) called for “a complete re-examination – if not the elimination – of the AmeriCorps program” and, two years later, charged its activists with “mimicking the work of lobbyists and political organizers for agenda-driven community organizations.”

Nonetheless, the most recent $1.1 trillion omnibus spending bill, passed by Republican legislators last December, increased funding for Americorps by $50.58 million and added another $10.382 million for the National Service Trust, which funds scholarships for Americorps “volunteers.”

Rep. Black is demanding the CNCS take action at once. “Our laws protecting the unborn today are tragically minimal, but they must mean something,” she said, “and when they are not followed, consequences must be enforced.”