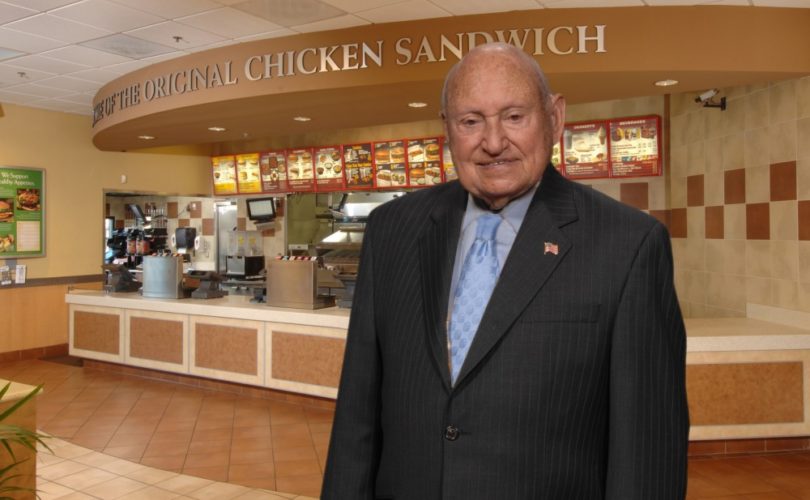 November 19, 2019 (LifeSiteNews) — Within 24 hours of Chick-fil-A announcing its new guidelines for charitable giving, pro-family and pro-LGBT activists have surprisingly found themselves in agreement.

“THE GAYS HAVE WON,” declared Zach Stafford, editor-in-chief of LGBT The Advocate Magazine.

Stafford’s triumphant declaration sums up the LGBT world’s view of Chick-fil-A’s announcement yesterday that it would halt donations to The Salvation Army and the Fellowship of Christian Athletes, groups that LGBT activists have deemed “anti-gay” because of their failure to recognize same-sex marriage as normal.

Many conservative and pro-family commentators drew the same conclusion, expressing anger and disgust, and a heavy dose of skepticism regarding the motives behind the fast food giant’s move.

The sad message of @ChickfilA is quite clear- they surrendered to anti- Christian hate groups. Tragic. Chick-fil-A To Stop Donating To Christian Charities Branded ‘Anti-LGBT’ https://t.co/o93PfaaS04

“In Aug 2012, I coordinated a national Chick-fil-A Appreciation Day after they were being bullied by militant hate groups. Millions showed up. Today, Chick-fil-A betrayed loyal customers for $$,” said Huckabee in another tweet. “I regret believing they would stay true to convictions of founder Truett Cathey. Sad.”

In Aug 2012, I coordinated a national @ChickfilA Appreciation Day after they were being bullied by militant hate groups. Millions showed up. Today, @ChickfilA betrayed loyal customers for $$. I regret believing they would stay true to convictions of founder Truett Cathey. Sad.

“I can tell you what Old Testament prophets would have said of Chick-fil-A's announcement,” wrote Dr. Robert Gagnon, professor of Theology at Houston Baptist University, on Facebook. “They would have said: Chick-fil-A is now officially a greedy and cowardly corporate whore, like nearly all other corporations. Their betrayal now is worse than if they had started out with such an m.o. (modus operandi).  It would have been better if they had never existed.”

“At the very least Christians should no longer give them special support,” added Gagnon.  “They should also take a good long while before patronizing them again, if ever. A message needs to be sent, loud and clear.”

“I find Chick-fil-A’s decision sad on at least two levels,” wrote John Stonestreet, president of The Colson Center for Christian Worldview. “First, their growth has clearly shown that you don’t have to cave to the pressure in order to survive and grow as a company.”

“Even more sad, however, is that without ever mentioning their names, the Chick-fil-A Foundation’s decision will only reinforce the slander that the organizations they are no longer giving to are, in fact, anti-LGBT,” continued Stonestreet. “It will reinforce that all the good these organizations do is immediately made invalid, if they are Christian groups with historic and biblical Christian convictions. By refusing to offer any clarity on the reasoning behind their decision, Chick-fil-A allowed the headlines to be re-written in a way that furthers the goals of the LGBT bullies, that ultimately there is only one acceptable position on these controversial issues: full-support and full affirmation.”

For a lot of us, Chick-fil-A’s quiet, cheerful resistance was a model of how to hold on to your Christian values, in spite of progressive spite, and still succeed,” wrote Rod Dreher at The American Conservative,” “ … until today.”

“Only the company’s top decision-makers know why they did what they did, but I would bet money that this was not about markets, but about its executive leadership class getting tired of them(selves) and their spouses being stink-eyed by fellow rich and upper middle class peers at social gatherings,” noted Dreher.

“Never, ever underestimate how much it matters to elites to be thought well of by their own social class,” he continued. “Their social class now reveres LGBTs; this requires it to despise Christians and others whose beliefs, for whatever reason, fail the progressive purity test.”

“For many conservative Christians, Chick-fil-A’s refusal to kowtow to the woke commissars was an inspiration,” said Dreher. “It was a small thing, maybe, but at least there was some major corporation that didn’t allow itself to be pushed around by these bullies.”

“And now that’s gone,” added Dreher. “The progressives took the biggest culture-war scalp of all today.”

Though Chick-fil-A has not publicly acknowledged the reason for its betrayal, everyone knows what it is. Chick-fil-A is attempting to curry favor with the “LGBTQ+” community that is shredding our social fabric. This policy shift constitutes a cowardly betrayal of Chick-fil-A’s Christian ethos and its Christian customers who have stood by Chick-fil-A through all its trials at the hands of legions of supporters of sexual deviance.

When wealthy and powerful men and women—who should be role models—demonstrate the kind of dishonesty and cowardice Cathy and his board just demonstrated, not only do the little people feel betrayed, but also some lose hope. Some will wonder why they—with scant resources—should stand unequivocally for Christ and his kingdom when millionaires who are safe and secure with their buckets of ducats are unwilling to do so.

“LGBTQ+” ideologues and their sycophants are going to see to it that owning a business—including even a teeny tiny business—or having a job will be conditioned on affirming homosexual acts and faux-marriage as good. Wake up, Christians, the persecution is getting real.

“What Chick-fil-A will now be surprised to learn is gay activists will absolutely not leave them alone,” suggested Glenn Stanton, director of Global Family Formation Studies for Focus on the Family, on Facebook. “They will still be judged ‘bigots’ because their owners still support natural marriage. The only action acceptable will be for them to 1) denounce their current convictions. 2) announce their strong support of the lgbt community, and 3) demonstrate that support with financial support.”

Prof. Robert George, McCormick Professor of Jurisprudence and director of the James Madison Program in American Ideals and Institutions at Princeton University, suggested on Facebook that troubled Chick-fil-A patrons deluge the organization with a single question, and then watch for the response:

Chick-fil-A can clarify its position with a simple yes or no answer to a single straightforward question:

Is a charity, Christian or otherwise, that holds to what the founder of Chick-fil-A believed about marriage eligible for the company's philanthropic support?

If the company declines to answer the question, then you know the answer. It is “no.”

I suggest flooding Chick-fil-A's customer relations in-box with the question.