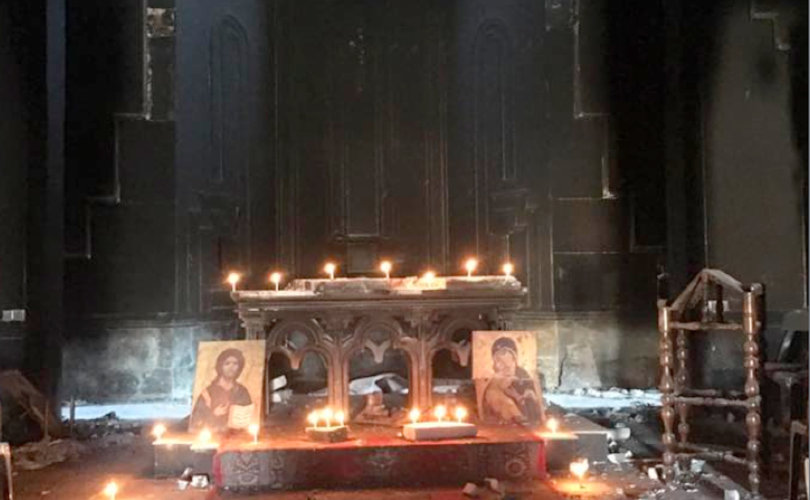 IRAQ, November 28, 2016 (LifeSiteNews) – In church after church in newly liberated northern Iraq, investigators have found nothing but ruins and desecration. Until last week, wading through the debris of one more wrecked sanctuary, they came upon an amazing and hopeful sight.

“And then this incredible experience,” Brussels-based investigator Sophia Kuby told her Facebook followers.

“We go in a burnt and destroyed church. ISIS has broken every sign of the cross, cut the heads of all the statutes [sic] burnt the bibles and holy books. And out of the black (literally!) appears the parish priest! Fr. Behnam was the last to leave and the first to be back. He can't live there yet, but the first thing he did was to make his church a place of worship and prayer again. The picture says more than 1,000 words. Very moving. Let's pray for Abouna Behnam — I promised we would!”

“I have many pictures which I will put up in time,”Kuby told LifeSiteNews. “But this one was so moving, such a testimony of faith. … The people have seen such horrors, but they don’t give up their faith. It is what gives them hope.”

The priest has cleaned off the altar, leaned two icons against its base — one of Jesus Christ and the second of Mary with the Christ Child, and placed a row of candles across its surface, lighting each in turn.  It was a sight for sore eyes.

“There is a level of destruction beyond words,” Kuby told LifeSiteNews. While entire villages have been rendered uninhabitable by combat, Christians and their churches have been targeted by ISIS for destruction.

Indeed, the Christian cross is clearly an object of intense hatred. “You have to wade through the debris” inside churches, said Kuby, but what the team found every time is that not a cross has been left in place or unbroken. Even the crosses on the rosaries have been torn off. As well, the statues of Jesus Christ and the saints have been beheaded. “The churches have been literally destroyed. Every altar has been destroyed,” Kuby said.

Tens of thousands of Christians fled ISIS in the space of a few days in August 2014 across the nearby border into Kurdistan. Those who return find messages left by retreating ISIS killers, says Kuby, such as  ‘You slaves of the cross, come back to Islam or die.’”

By targeting churches, says Kuby, ISIS is attacking the Christian communities that have lived in the region since the first century. “Genocide is not killing only. When you destroy the churches, you are destroying the community.”

As for the Yazidis, their villages are too far from the border for flee. Few escaped. Thousands were murdered, and many thousands of women and girls were captured to serve ISIS as sex slaves.

Though many refugees are hesitant to bring their children back into the area without guarantees their Muslim neighbors will not attack them again, Father Behnam did return.

“It could not have been easy,” Kuby said. “There many checkpoints. Many permits. But he told us this was his village. He was baptized here and learned his catechism here.” But his 11 siblings are scattered around the world now.

Do the former inhabitants want to return? “Yes,” Kuby said. “They say they do. They have lived here for many years in peace with their Muslim neighbors. But now they cannot trust them. They say they will return only if there is security.” This will require nothing less than an international military presence, insisted the refugees and Kuby.

Kuby’s organization, the European offshoot of Alliance Defending Freedom in the U.S., is responding to requests for hard evidence of genocide from UN and European authorities.