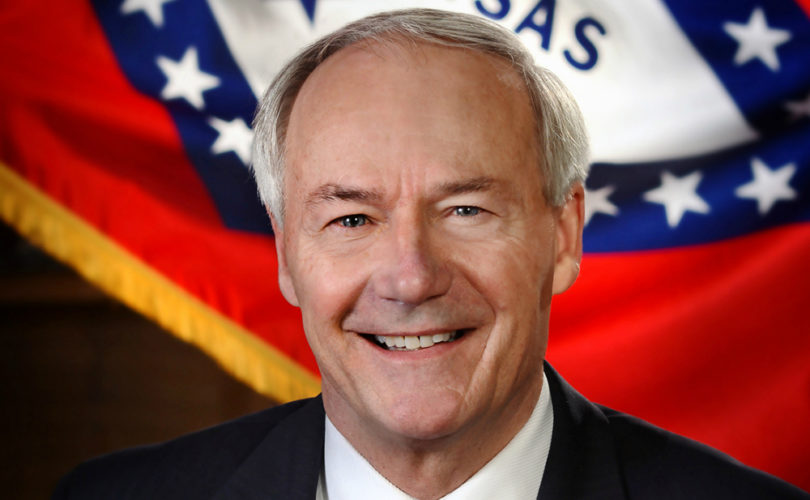 LITTLE ROCK, AR, April 2, 2015 (LifeSiteNews.com) – Arkansas Gov. Asa Hutchinson has insisted that the state legislature revise a religious freedom bill it passed earlier this week, apparently hoping to minimize backlash from homosexual activists. Had the legislature refused to act, the bill would have become law without Hutchinson’s signature in just a few more days, but as of late Wednesday night, the Senate had altered the bill to his specifications and sent it to the House for a possible Thursday vote.

Arkansas’ Religious Freedom Restoration Act (RFRA) was based on a Clinton-era federal law of the same name, and passed Tuesday amid a firestorm of criticism over a similar law passed in Indiana and signed by Republican Gov. Mike Pence.  Gay activists are calling both bills “anti-gay discrimination bills,” despite the fact that their wording differs only slightly from the federal RFRA.

The RFRA is designed to allow religious believers exemptions from certain laws that compel actions that violate their religious beliefs.  The federal version was passed to protect a group of Native Americans who smoked peyote as part of their religious rituals from federal drug laws prohibiting the use of the substance.  Since then, it has applied to numerous other situations, including Muslim prisoners who objected to rules requiring their faces to be clean-shaven, and Catholic pharmacists who refused to dispense abortifacients and contraceptives. More recently, the Supreme Court ruled in its Hobby Lobby decision that closely-held for-profit corporations owned by Christians could not be forced by the Obama administration to provide coverage for contraceptives, sterilizations and abortion-causing drugs.

The federal RFRA is so vaguely written that different federal courts have come to different conclusions about who can use it for legal protection against whom.   Some federal courts have ruled that the federal RFRA applies only to individuals who believe their religious rights have been infringed by the federal government.  Others – including the Supreme Court in its Hobby Lobby decision – have interpreted the law to apply to any entity – individual, church, or corporation – that believes its religious rights are being violated.

Arkansas’ RFRA was written in the wake of the Hobby Lobby decision to make clear that it is intended to protect both individuals’ and corporations’ religious freedom rights from infringement by governments and private citizens alike.  The proposed law would also allow entities to sue in the event legislation is enacted that is likely to infringe on their religious freedom, whether or not any violation has yet occurred.

According to homosexual activists, these clarifications give far too much deference to religious believers, especially owners of for-profit corporations.  They say updated RFRAs like Arkansas’ would enable any business to refuse service to gays and lesbians on religious grounds.

Meanwhile, the bill’s supporters say it was never intended to unleash a free-for-all of discrimination against any group.

“What my bill was focused on was to let somebody believe what they want to believe, carry out that belief and not have the state interfere with it,” the bill’s House sponsor, Republican Rep. Bob Ballinger, told CNN.

Ballinger told the Arkansas News that while the RFRA would give a Christian baker who refused to make a cake for a same-sex “wedding” on religious grounds the ability to defend his or herself against accusations of discrimination, it would still be up to the courts whether such a defense would prevail.  “It doesn’t mean you automatically win,” said Ballinger.

But none of that matters to gay activists, who have stirred up national outrage with noisy accusations of bigotry and discrimination against both Arkansas and Indiana.  They have pressured high-profile companies to avoid doing business with either state, and threatened boycotts should the companies fail to comply.  In many cases, those threats have proved effective, and they have had a chilling effect on other states’ religious freedom measures: Both Georgia and Montana killed their own RFRAs this week in response to the brouhaha.

Economic powerhouse Walmart – by far the nation’s largest non-governmental employer – was one of the companies that turned up the pressure in Arkansas.  The CEO of the Bentonville, Ark. based company took to social media this week to urge Gov. Hutchinson to veto the RFRA.

“Every day, in our stores, we see firsthand the benefits diversity and inclusion have on our associates, customers and communities we serve,” Walmart CEO Doug McMillon said in a statement posted to Twitter. “[The RFRA] threatens to undermine the spirit of inclusion present throughout the state of Arkansas and does not reflect the values we proudly uphold. For these reasons, we are asking Governor Hutchinson to veto this legislation.”

Now, under pressure from gay activists and businesses alike, Govs. Pence and Hutchinson have both backpedaled away from their previous support of the bills.  In Indiana, Pence has asked for additional language to be added to his state’s RFRA making it clear that the bill should not be construed to allow “discrimination” against gays. In Arkansas, where the legislature debated but ultimately rejected adding such language, Gov. Hutchinson has taken the opposite approach: He wants the clarifications Arkansas built into the RFRA removed in order to make the bill look more like the federal version.

Hutchinson admitted that it was the outcry from homosexual activists and business leaders that changed his outlook from earlier in the week, when he had promised to sign the bill.

“I have had some communication personally with some of the business leaders across the state … and they raised some important issues,” Hutchinson said. “I don’t think it’s necessarily based on what’s in this law as much as how it’s being construed nationally.”

Hutchinson asked the general assembly to either recall or amend the bill to match the federal version, and said he would not sign it as is.

Hutchinson did not have to sign the RFRA for it to become law.  Written into the bill was a clause stating that if the governor took no action – in other words, if he failed to veto it – it would have automatically become law four days after its passage.

But Wednesday night, the Arkansas Senate stripped the bill of its clarifying language and sent it to the House for debate and a possible Thursday vote.  Under the new proposal, religious believers will only enjoy explicit protection from governmental infringement of their rights – actions by individuals and other private entities will remain open to interpretation by the increasingly gay-friendly courts.

Homosexual activists said the new version of the bill was a step in the right direction.

“What's clear is the governor has been listening,” said Chad Griffin, president of the Human Rights Campaign, the nation's largest gay activist group, in a statement. Now, he said, homosexuals just have to “keep the pressure on.”

“This is a good opportunity, and I feel like it protects the citizens of the state of Arkansas that they'll be able to believe what they want to believe without government interference,” Ballinger told the AP.

But some supporters of the original RFRA said they were disheartened by the changes.

“I'm very puzzled at this point to see why the bill would need to be amended at this late date, considering everybody in the chamber has had a chance to see it,” said Jerry Cox of the Arkansas Family Council. “I think it's been thoroughly vetted, and it's a good law.”