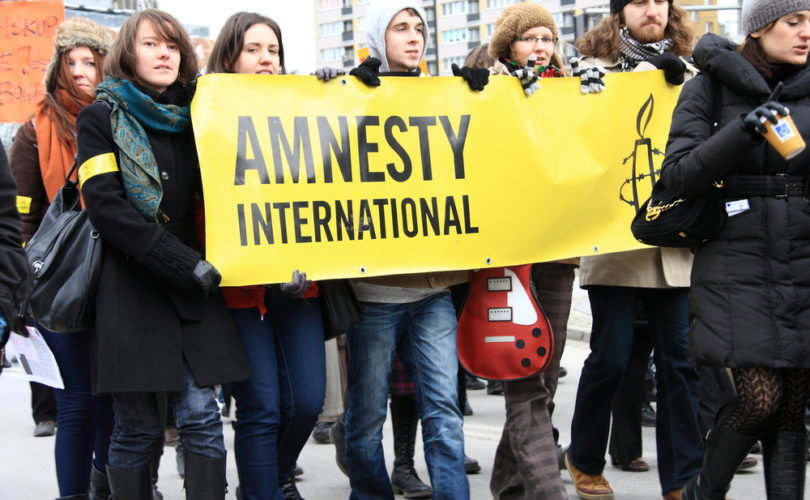 July 17, 2018 (Society for the Protection of Unborn Children) – Amnesty International has changed its abortion policy to one of broad support for “safe and legal abortion”.

In 2007, the human rights organisation dropped its neutral position on abortion, but insisted that it only opposed criminalising abortion, and didn't “promote it as a human right”. However, after years of aggressively promoting abortion all over the world, this pretence has now been dropped.

Delegates gathered in Warsaw over July 6-8 approved “proposals to tackle the devastating human rights consequences of misguided attempts by countries to criminalise and restrict abortion and to punish people for using drugs.”

On abortion, the press release says: “Representatives voted to adopt an updated position on abortion that calls on States not just to decriminalise abortion, but to guarantee access to safe and legal abortion in a broad way that fully respects the rights of all women, girls and people who can get pregnant. It will replace Amnesty International's current position on abortion, which calls for the decriminalisation of abortion, and access to abortion in a limited set of cases, which was adopted in 2007.”

The ending of neutrality on abortion in 2007 caused an immediate outcry among pro-life supporters of the group, such as the Rt Rev Michael Evans, Bishop of East Anglia, who resigned his membership after thirty-one years of active involvement in the organisation. SPUC members, especially SPUC's former chairman of executive board Michael Hill, had “fought tooth-and-nail to stop Amnesty being infiltrated by pro-abortion lobbyists.” At the time, Amnesty seemed eager to reassure supporters that they were not a pro-abortion organisation.

However, the organisation quickly became one of the biggest promoters of abortion in the world. It campaigned for abortion in Ireland years before this year's referendum, releasing a video that many commentators denounced as being anti-catholic. They actively campaigned for the repeal of the Eighth Amendment (and activists were filmed making misleading statements about abortion in Ireland) and since then have been at the forefront of calls to impose abortion on Northern Ireland.

“Everyone has a right to life”

It now explicitly promotes abortion as a human rights issue. On its “facts about abortion page” it asserts that “access to safe abortion services is a human right. Under international human rights law, everyone has a right to life, a right to health, and a right to be free from violence, discrimination, and torture or cruel, inhuman and degrading treatment.”

The human rights of the unborn are nowhere mentioned.