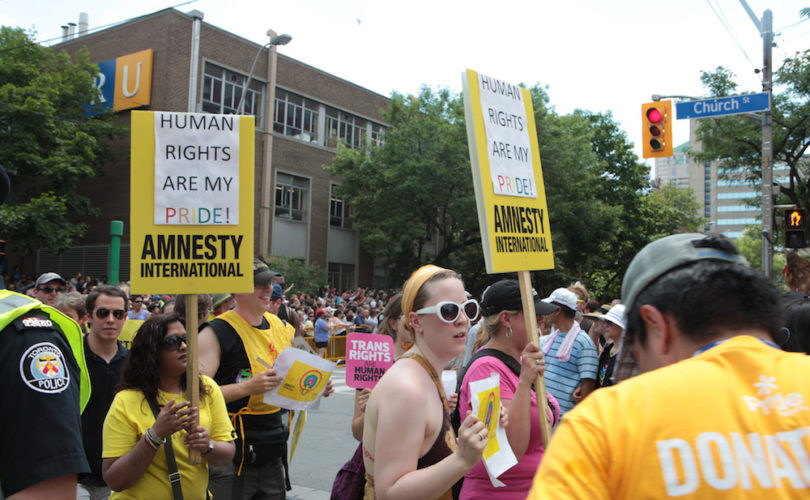 June 28, 2016 (LifeSiteNews) — A Polish pro-life leader suggests that Amnesty International should change its name to “Abortion International” because of its actions against the unborn.

London-based Amnesty International (AI), founded in the 1960s to protect political prisoners, expressed its “concerns” regarding the proposed abortion ban in Poland. The group opposes the death penalty and torture and supports human rights but has a long track record of fighting for abortion all over the world.

After Amnesty International launched a controversial pro-abortion video in Ireland, the organization’s secretary general, Salil Shetty, wrote to Polish Prime Minister Beata Szydło regarding the ban, which was not proposed by the government but by Polish citizens in a grass-roots process. Such proposals, called civic bills, are allowed under Polish law. Shetty urged Szydło not to support the citizen’s bill.

The proposal has yet to be discussed in Parliament. A vote is expected in October after the required 100,000 signatures of support are validated. The signatures are already collected despite attacks on pro-life activists. If enacted, the new law would effectively make all abortions illegal in Poland, giving legal protection to all children from the moment of conception.

Shetty wrote that “this proposal will violate women’s and girls’ human rights, including their right to life, health, and to be free from torture and other cruel, inhuman or/and degrading treatment or punishment (other ill treatment), as well as their right to privacy, to information and to equality and non-discrimination.”

The bill specifically states that a doctor will not face punishment if an unborn child dies while trying to save a woman’s life. However, Shetty wrote that it would negatively impact “the rights and ability of health professionals to provide the life-saving and health-preserving services that women and girls need and have a right to access.”

Additionally, in Shetty’s view, the changes to the existing abortion law would “constitute a retrogressive measure.” Shetty, former director of the United Nations Millennium Campaign, warned that if enacted, the new law “will place Poland in clear breach of its international, regional and national legal obligations.”

Mariusz Dzierżawski of the Right to Life Foundation, which spearheaded the proposed bill, told LifeSiteNews that AI’s letter “reminds him of the most duplicitous and two-faced documents sent by the Communists.” Dzierżawski explained that the Soviet Union called attacks on sovereign nations “the fight for peace.” Similarly, Dzierżawski argued, “AI calls for the killing of children in mothers’ wombs and calls it ‘the fight for human rights.’”

Dzierżawski also pointed out that late-term abortions sometimes involve tearing the unborn babies’ limbs. “AI supports this torture and at the same time claims that it is against torture and inhuman treatment,” he said. “I don’t think many people in Poland will believe in those bald-faced lies.”

While fighting against the death penalty and torture, Amnesty International USA wrote about potassium chloride as one of the drugs used in executions. The organization stated that it “stops the heart” and “this chemical can cause excruciating pain if the prisoner is still conscious.”

But AI failed to mention that the same substance is also used during abortion procedures to make sure the baby does not survive.

Amnesty International USA also has expressed concern about the involvement of health personnel in executions. The organization states that “Virtually all codes of professional ethics which consider the death penalty oppose health professional participation. Despite this, health professionals are required by law in many death penalty states to assist executions and in some cases have carried out the killings.” However, when a Polish doctor, Bogdan Chazan, lost his job for his conscientious refusal to refer for an abortion, AI was silent. Chazan confirmed to LifeSiteNews that the organization did not get involved in the highly publicized case.

Similarly, when in 2015 the Right to Life Foundation wrote an Open Letter to the Human Rights Activists from AI in defense of Mary Wagner, jailed for her peaceful defense of the unborn, there was no answer.

Wagner has spent years in a Canadian prison for trying to dissuade mothers from getting abortions. According to AI’s website, it “campaigns for the release of prisoners of conscience – people who have been jailed because of their political, religious or other conscientiously-held beliefs, ethnic origin, sex, color, language, national or social origin, economic status, birth, sexual orientation or other status, provided that they have neither used nor advocated violence.”

But when a radical feminist fighting for her cause faced legal trouble over nudity in public, AI reacted. In the case of then-Femen member Amina Sboui (aka Amina Tyler) from Tunisia, AI wrote: “A prison sentence for such conduct, even if some might regard it as offensive, would be inherently disproportionate and incompatible with Tunisia's international human rights obligations to respect and protect freedom of expression.” Philip Luther from AI said that “Imprisoning anyone for expressing themselves is inherently disproportionate.”

Dzierżawski told LifeSiteNews in an e-mail that the right to life is the base of human rights, adding that if someone wants to be a human rights defender, it should demand the abortion ban. “If someone thinks killing the unborn children is something good, he is a liar and a wretch,” he said. “AI is a murderous organization and should be treated as such.” He also suggested the group should change its name to “Abortion International.”

She added that financial backing came from American billionaires George Soros (more than $800,000) and Chuck Feeney.