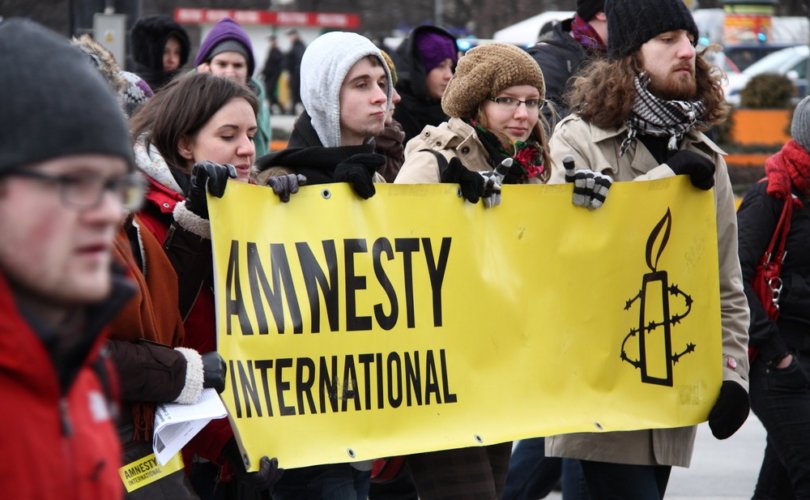 BELFAST, Ireland, December 12, 2017 (LifeSiteNews) – Amnesty International Ireland is being threatened with criminal charges after a regulatory body found that the human rights organization illegally sought and received money from U.S. globalist billionaire George Soros to campaign for legalized abortion in the country.

Ireland’s Standards in Public Office Commission discovered the $161,000 (€137,000) grant from Soros’ Open Society Foundations to Amnesty. The commission said that accepting foreign funds is a violation of the 1997 Electoral Act. The Commission warned Amnesty that it may face criminal charges and up to three years imprisonment if it does not return the money.

Amnesty admitted to taking the grant, but argued that Ireland’s law against receiving large foreign money to further political causes was “unfair.” It said it would disobey any court order to give back the money.

“Amnesty International will not be complying with the instruction from the Standards in Public Office Commission,” Amnesty Executive Director Colm O’Gorman stated. He blamed the whole situation on “anti-choice campaigners” whom he said “weaponized a deeply flawed law.”

National pro-life groups have expressed outrage at Amnesty’s defiance of the country’s laws.

“Amnesty say they will break the law and take funds from George Soros to push abortion referendum,” tweeted the pro-life group Youth Defence.

“Amnesty is now saying it will break the law and take money from abroad, clearly to spend to push abortion/repeal the 8th. Obviously since they are not supported by Irish people they need George Soros' money. Their stance is unacceptable and illegal,” tweeted Life institute.

Amnesty is now saying it will break the law and take money from abroad, clearly to spend to push abortion/repeal the 8th. Obviously since they are not supported by Irish people they need George Soros' money. Their stance is unacceptable and illegal. #SaveThe8th

“Amnesty International admits to taking US funding for abortion campaign, admits it has broken the law, and refuses to comply with the law. This is beyond an outrage,” he tweeted.

Amnesty claimed they had the Commission’s approval to take the funds for opinion polling and “research” into possible prototype abortion legislation. O’Gorman implied that the commission reversed itself because of pro-life pressure.

Another pro-abortion organization, the Abortion Rights Campaign, also received Soros-based money. The Standards in Public Office Commission ordered them to refund the donation, and they did.

Soros’ Open Society Foundations is described as the most powerful political charity in the world.  In Hungary and elsewhere, it has been opposed for working to undermine the clear will of the native people.

Last year, leaked documents revealed Soros was using his wealth to fund a three-year plan to eradicate pro-life laws around the world. His Open Society Foundations’ strategy was to first hit hard in Ireland, and then use Ireland as a model to dismantle right-to-life protections in “other strongly Catholic countries.”