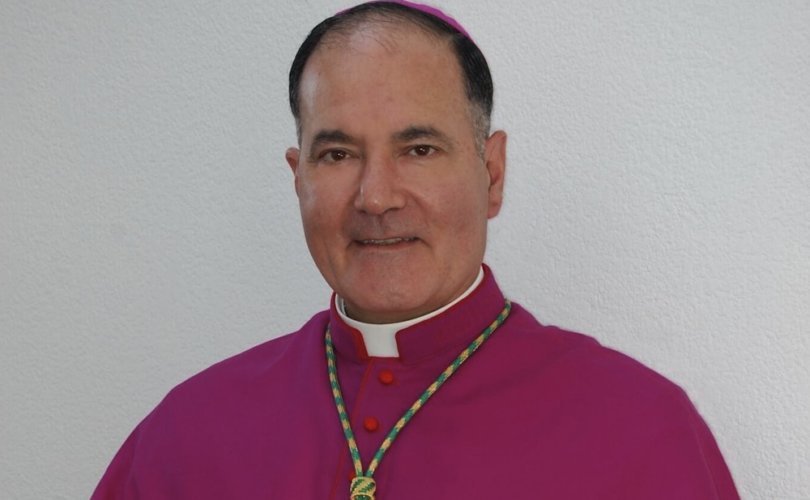 SAN LUIS, Argentina, September 1, 2017 (LifeSiteNews) – An Argentine bishop’s new pastoral letter on Amoris Laetitia defies interpretations of the pope’s controversial exhortation by other bishops in that it unequivocally upholds Church teaching on marriage.

The letter also acknowledges that the approaches to the document allowing Holy Communion for Catholics in irregular situations have caused disquiet in the Church.

Bishop Pedro Daniel Martinez Perea of San Luis, Argentina, maintains the indissolubility of marriage in his letter and says Pope Francis does not intend to change Church teaching on marriage. In fact, the Argentine bishop uses the contentious document itself to reaffirm previous Church teaching.

Bishop Martinez “basically says that Amoris Laetitia doesn't change anything of the previous teaching,” said Dr. Kurt Martens, canon law professor at The Catholic University of America, “and he gets back to the teaching of John Paul II in Familiaris Consortio … he does use Pope Francis to emphasize the teaching of the Church. I think it's great news.”

In the letter, Bishop Martinez plainly states a marriage must be annulled for Catholics to remarry. And in cases where a declaration of nullity is not granted, he lays out a number of paths for “pastoral accompaniment” that align with Church teaching.

The term “accompaniment” is frequently employed to describe Amoris Laetitia’s intent regarding divorced and civilly remarried couples, those cohabiting or in homosexual unions, but more often than not it involves accompanying those couples in question to remain living in objective sin.

“The text is very straightforward,” Martens told Catholic News Agency (CNA). “It's a very well done pastoral letter with a lot of teaching opportunity; he does use Pope Francis to emphasize the teaching of the Church. I think it's great news.”

Bishop Martinez's letter, titled “Marriage, new unions, and the Eucharist in chapter 8 of Amoris Laetitia.” was issued June 29 and distributed to the priests of his diocese. It touches on confusion created by some interpretations of Pope Francis’ document while also stressing the importance of “helping married couples to follow God's plans in their lives.”

A 'pastoral pseudo-solution without truth'

“Do not yield to the temptation to give a 'pastoral pseudo-solution without truth,' so that the faithful may feel understood,” Bishop Martinez told his priests. “Nor should you give a kind of 'poor, rigorous, and merciless recipe,' as though the faithful were only a number and not a dear son of God whom, as ministers of grace, we must help by demonstrating the way to eternal Beatitude.”

The bishop called Amoris Laetitia “a great catechesis on love in the family, which is the cell of society” and also said it is “a great message of hope during our sojourn in this secularized and earthly world.”

‘Disquiet, perplexity and confusion among the faithful’

But even as the Argentine bishop said the document was “a profound catechesis,” he did point to how “some readings of the exhortation have aroused disquiet, perplexity, and even confusion among the faithful, especially with regard to the possibility of persons united by a previous, valid, sacramental bond and who are currently living, more uxorio, with another person in a new non-sacramental union, accessing the sacraments, in particular Holy Communion.”

In taking up the confusion, Bishop Martinez discussed revelation and the magisterium as “irreplaceable foundations for theological reflection in the Catholic Church,” and the essential context for understanding Amoris Laetitia, the CNA report said.

He also referenced both the recent magisterium and the writings of St. Vincent of Lerins, St. Thomas Aquinas, the First Vatican Council, the Roman Curia of the early 20th century, and popes from Leo XIII to St. John XXIII to explain Pope Francis’ document.

“The Holy Father does not intend to manifest a new moral doctrine on Christian marriage,” he wrote.

Bishop Martinez also considered possible reasons for the exhortation's “distinct interpretations” in his letter, according to CNA.

His suggestions referenced inadequate evaluation of the ordinary magisterium; an erroneous understanding of divine public Revelation that sees it as a continual unfolding in history, in which the bishops can 'constitute' the deposit of faith, and not merely transmit, conserve, and defend it faithfully; and a dualistic conception of the Church, mistakenly perceiving a separation between dogma and morality, or between a visible institution and a “charismatic call.”

The bishop’s Diocese of San Luis is located under the metropolitan see of the Archdiocese of San Juan de Cuyo in Argentina.

The bishops of the Buenos Aires province in Argentina had written to their priests last September with guidelines for implementing Amoris Laetitia.

The bishops’ guidelines interpreted the eighth chapter of Amoris Laetitia on how to handle couples who are remarried after divorce but have not been given annulments, and closely follow the language of the most controversial parts of Pope Francis’ exhortation, including the infamous footnote 351 that opens the door to allowing access to communion for individuals living in objective sin.

Pope Francis had written to the Bueno Aires bishops shortly thereafter saying there is “no other interpretation” of Amoris Laetitia than theirs.

It was the first time there was explicit confirmation of Pope Francis’ exhortation as allowing Holy Communion for divorced and remarried Catholics without the stipulation the couple living in sexual continence as is always required by the Church.

“I thank you for the work they have done on this: a true example of accompaniment for the priests,” Pope Francis wrote. “The document is very good and completely explains the meaning of chapter VIII of Amoris Laetitia. There are no other interpretations. And I am certain that it will do much good. May the Lord reward this effort of pastoral charity.”

The following month the archbishop of Granada released a statement saying his diocese would follow the lead of the Buenos Aires bishops in implementing Amoris Laetitia, and several others across the world subsequently followed along later to varying degrees. The bishops of Malta published one of the most liberal interpretations.

Aside from the bishops of the Buenos Aires province, Bishop Angel José Macin of Reconquista and Archbishop Victor Manuel Fernández, rector of the Pontifical Catholic University of Argentina, have put forth similar interpretations.

Bishop Macin celebrated a special Mass for civilly-divorced-and-remarried couples in his diocese earlier this summer. Approximately 30 couples were all invited to receive Holy Communion despite there being no indication that any of them had promised to live as brother and sister.

Archbishop Fernández, rector of the Pontifical Catholic University of Argentina, close papal adviser and the rumored ghostwriter of Amoris Laetitia, said in recent comments in a theological journal of the Latin American bishops that Pope Francis allowed communion for divorced and remarried Catholics “in a discreet way” through the document's controversial footnote #351.

The archbishop, also the author of a book titled “Heal Me With Your Mouth: The Art of Kissing,” has also concurred that the Pope confirmed this interpretation of Amoris Laetitia last year when he supported the Argentinian bishops’ guidelines.

Amoris Laetitia’s Footnote 351 ostensibly contradicts Pope St. John Paul II’s Familiaris Consortio by asserting that in some instances integrating divorced and remarried Catholics and others in “irregular” unions back into the Church “can include the help of the sacraments.”

Sacramental marriage “cannot be dissolved by any human power,” Bishop Martinez wrote in his letter, “neither civil nor ecclesiastical, neither by the passage of time after separation (culpable or not; brief or elongated), nor because love no longer exists between the spouses, nor by a personal conviction in conscience, even in good faith. Certainty of personal opinion regarding the invalidity of marriage is not a cause of nullity.”

The indissolubility of marriage is based on “the union made by God in the spouses,” he said. “In this is clearly manifested the priority of the existence of the Christian marriage over moral acts and their consequences.”

Bishop Martinez laid out conditions for receiving communion in his letter, and the magisterium of Amoris Laetitia on the Eucharist, new unions and pastoral conversion. The conditions as he explained were in line with previous Church teaching on marriage.

Another controversial aspect of Amoris Laetitia is an emphasis on personal conscience in ultimately allowing couples living in objectively sinful scenarios to discern they may present themselves for communion without changing their living situation.

This component of the document has also been part of the various interpretations allowing communion for divorced and remarried Catholics, and something that according to the CNA report, Bishop Martinez rejects.

In excluding a “conscience 'solution'” and clarifying that a personal conviction in conscience that one's marriage was invalid does not make that marriage invalid, Bishop Martinez is “on the same page” as Philadelphia Archbishop Charles Chaput and the bishops of western Canada, Martens said.

“There is nothing in there in the sense of what you see in the Malta guidelines, or in what the bishops of the Buenos Aires province have said … I think it's pretty significant that also from Argentina we're hearing this voice.”

Archbishop Chaput had said in the early months after Amoris Laetitia’s April 2016 promulgation that divorced and remarried Catholics must be abstinent to receive communion, releasing guidelines affirming such for his archdiocese.

Bishop Martinez was joined by in affirming Church teaching on marriage by another Argentine bishop, his predecessor in the Diocese of San Luis, Bishop Juan Rodolfo Laise, O.F.M. Cap.

Bishop Laise was among the first cosigners last summer of a Declaration of Fidelity to the Church's Unchangeable Teaching on Marriage and to Her Uninterrupted Discipline, which was released in August 2016. More than 879,000 individuals have signed the document reaffirming the Church’s moral principles, including eight cardinals.