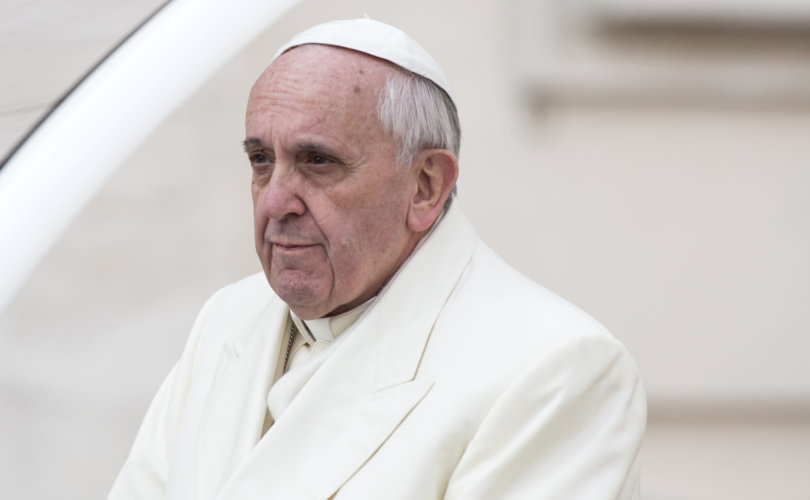 September 14, 2017 (LifeSiteNews) – A controversial book on kissing written by the man widely regarded to be the principal ghostwriter of Pope Francis’ apostolic exhortation Amoris Laetitia has now become available in an English translation.

The author, Archbishop Víctor Manuel “Tucho” Fernández, is the rector of the Pontifical Catholic University of Argentina and a close confidant of Pope Francis whose statements contradicting Catholic moral and sacramental doctrine are reproduced in Amoris Laetitia, sometimes almost verbatim. The document nowhere cites Fernandez’s works, however.

Fernandez’s theology seeks to justify the practice of admitting public sinners to the sacraments of the Church by pointing out that subjective factors could reduce culpability for sin, a tack taken by Francis in his attempt to justify giving Holy Communion to those who are in adulterous second “marriages” that are sacramentally invalid.

The new translation of the book, which has been posted on Medium.com by someone using Fernandez’s name, is available free of charge to the public. Some passages are translated in a deceptively inaccurate way, although the translation is generally a faithful reproduction of the Spanish original, which also can be found online.

When you whisper with a nervous tone,
your beautiful body touches my body
and I gather in the kisses of your mouth
the burning gusts of your breath (J. Dicenta).

He also quotes the Marxist and Stalinist poet Pablo Neruda, who writes:

I’ve gone marking with crosses of fire
the white atlas of your body.
My mouth was a spider that was climbing onto you,
hiding itself
in you, behind you, fearful, thirsty.

In another chapter, Fernandez provides a series of quotes from young people that he asked to give him their opinions on kissing. Among the quotes he provides statements such as:

● “I love covering the whole of the other’s lips with tiny kisses.”

● “I love kissing his fingertips. It gets more affectionate than anything else.”

● “I once went crazy with the pleasure I was given from being kissed on the eyes. But I didn’t say this because it’s going to leave me blind.”

● “It seems to me that when you start kissing with the tongue it is very possible to lose control, and you want to take hold of your hottie, you lose respect. But it’s also on her, if she knows what she wants … “

Fernandez offers advice on how to make oneself physically attractive to a kissing partner. “Everything can have a solution if it is detected in time and it is addressed,” he writes. “For example, it can be that one of the two is having bad breath, which can be deeply unpleasant and take away the whole enchantment from the kiss. But it is solved by taking precautions by brushing one’s teeth … and if it is more serious and persistent it is solved by visiting the dentist or checking the digestive system.”

“It can also be the perfume that one of the two uses; or an annoying smell that is solved by showering more often, or by changing clothes more often,” adds Fernandez. “It can be the annoying mustache, which could be trimmed a little more so that you do not have to avoid it so much. It can also be the position of the body, and between the two they could discover what the most comfortable position is for them both.”

The life of man is sustained by two forms of nourishment: food and air. And without food it can indeed subsist for some length of time, but without air, it cannot subsist for even an hour. And therefore, so that we might live, we inhale air through the mouth, and exhale. And that same thing which is emitted or received has obtained the name of Spirit. Wherefore, in a kiss two breaths meet, and are mixed together, and are united: from which a certain sweetness of soul arising, it announces and more tightly binds the affection of those who kiss.

However, Fernandez translates the same passage by giving it a carnal significance, translating the Latin spiritus in the passage both as “breath” and “spirit,” as if to imply that Aelred is confusing the carnal with the spiritual and claiming that kisses bring about spiritual unions. He also translates the Latin word monet (advise, warn, announce) as “excites.” He even adds an entire sentence that is not present in the Latin original, which makes Aelred claim that the kiss is as necessary to love as air is to breathing. The English translation does not capture Fernandez’s Spanish translation of the Latin well. Fernandez translates it into Spanish thus:

The life of the human body is sustained with two things: food and air. Without food, it is possible to resist a certain period of time, but without air it is impossible to live for a few minutes. This, for love, is the kiss. In the kiss are found two breathings, and two spirits are mixed together, and this mixture produces in the soul a sweetness that excites and tightens the affections of those who kiss each other (Translation directly from Spanish original by LifeSite).

Fernandez does not quote the passages that follow, in which Aelred makes it clear that the physical kiss is discussed as an analogy to spiritual union and that the kiss is nothing more than a sign.

Misleading inaccuracies in the English translation

Although the English translation is generally accurate, it contains modifications that seem to be designed to shield the author from criticism and even scandal. In the English translation, Fernandez says, “I want to clarify that this book was not written based on my own experience, but based on the lives of people who kiss.” In the original sentence, he says, “I want to clarify that this book is not written so much from my own experience, but from the experience of those who kiss.”

That Fernandez is speaking, at least in part, from his own experience, seems to be implied in passages that he writes in the first person plural: “A true kiss shows that the other is sacred to me. But when sex is out of control, and we want more — more pleasure, more intensity — the other is transformed into a sponge which we want to squeeze out totally, until the last drop. And so they start losing the magic, the veneration, the adoration. And the clearest sign of the death of love is that those tremulous kisses disappear … ”

The English translator also incorrectly translates a passage in which the author speaks of himself making himself “one” with another, and uses the masculine gender to speak of the other.

A strange juxtaposition of the carnal and spiritual

Fernandez includes two final chapters on what he calls the “infinite kiss” and the “super-mystical kiss,” which have to do with spiritual union with God, and quotes a number of Catholic saints and mystics who make an analogy of the union with God with a kiss. The result is a strange juxtaposition of Catholic spiritual writing that uses the kiss as an analogy to spiritual union, with Fernandez’s own apparent obsession with the sensual aspects of kissing, and his ambiguous – and somewhat ambivalent – understanding of the relationship between the two.