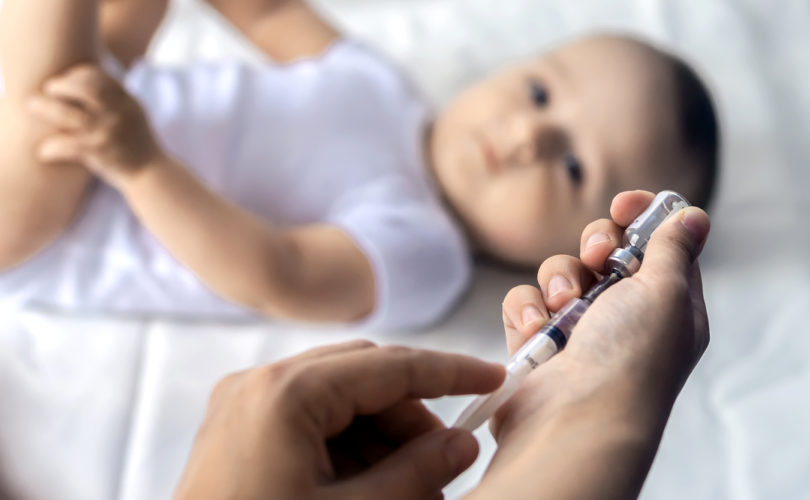 As the direct result of Keele’s actions, the Exley lab will close Aug. 31, ending three decades of independent, cutting-edge research elucidating aluminum’s effects on health across the human lifespan.

Even in the face of their lab’s imminent closure, the Exley group continues to publish and add to its already impressive roster of approximately 200 publications.

The researchers’ two latest studies — one focusing on the largely unmonitored aluminum content of infant vaccines, the other on the strong association of aluminum in familial Alzheimer’s disease — underscore why independent research is so important, and so threatening to the status quo.

Aluminum in infant vaccines — ‘akin to a lottery’

One of the studies, published in the Journal of Trace Elements in Medicine and Biology, found the amount of aluminum an infant receives in a vaccine, far from being predictable or controlled, seems to be “akin to a lottery.”

The group analyzed the aluminum content of 13 infant vaccines manufactured by GlaxoSmithKline, Merck, Sanofi Pasteur and Pfizer. In 10 of 13 vaccines, the measured quantity of aluminum failed to match up to the amount of aluminum reported by manufacturers in patient information leaflets. Analysis across vaccines and vaccine lots revealed the following:

Six of the vaccines (about half), including Pfizer’s Prevnar 13, contained a statistically significant greater quantity of aluminum compared with manufacturer data.

For each single vaccine brand, the range of aluminum content “varied considerably.”

Neither the European Medicines Agency nor the U.S. Food and Drug Administration could confirm they independently or routinely measure the aluminum content of infant vaccines, instead indicating that they rely upon manufacturers’ (flawed) data.

These “not reassuring” findings suggest, according to the researchers, “that vaccine manufacturers have limited control over the aluminium content of their vaccines” and the aluminum content “of individual vaccines within vaccine lots vary significantly.”

Given aluminum’s known neurotoxicity, the researchers also emphasized we “cannot afford to be complacent about its injection into infants” — a position the Exley group has repeatedly emphasized, and which is shared by other experts.

The second study, published in the Journal of Alzheimer’s Disease Reports, builds on the Exley group’s extensive body of work linking aluminum to Alzheimer’s disease. The new study focuses on cases of familial Alzheimer’s disease, which is driven by predispositions that run in families.

In all three cases, the researchers observed “neuronal cells loaded with aluminum” and noted the aluminum’s “unequivocal” co-location with neurofibrillary tangles across multiple brain regions. Neurofibrillary tangles (formed by misfolded tau protein inside the brain cells) are an important feature of and biomarker for Alzheimer’s.

The Exley group’s conclusion, which dovetails with their other studies of brain tissue and neurodegeneration — including findings showing extraordinarily high levels of aluminum in autism brain tissue — is that “these data support the intricate associations of aluminum in the neuropathology of fAD [familial Alzheimer’s disease].”

Young and old at risk

In recent years, the American insurance industry has reported a 200% increase in diagnosed dementia and Alzheimer’s among younger adults. UK researchers who looked at 20-year dementia trends in the U.S. and other western nations reported in a 2015 study in Surgical Neurology that dementias are starting “a decade earlier than they used to.”

Recognizing that roughly nine in 10 cases of young-onset Alzheimer’s have no genetic explanation, Exley has suggested in prior work that aluminum may act as a catalyst for early-onset Alzheimer’s in individuals “without concomitant predispositions, genetic or otherwise.” He proposes viewing Alzheimer’s as “an acute response to chronic intoxication by aluminum.”

As the Exley group points out in its new paper on infant vaccines, the aluminum adjuvants in the vaccines start the clock ticking on a lifetime body burden of aluminum.

Are we seeing some of the effects of this body burden in the younger adults in their 30s and 40s who now represent 15% of those diagnosed with Alzheimer’s and dementia?

The Exley group also asks, what are the implications for children’s longer-term health when babies receive significantly more aluminum in their vaccines than the amounts that manufacturers and regulators (without convincing data) proclaim “safe”?

If universities continue to choke off funding for vital research, it may become increasingly difficult to answer these all-important questions.