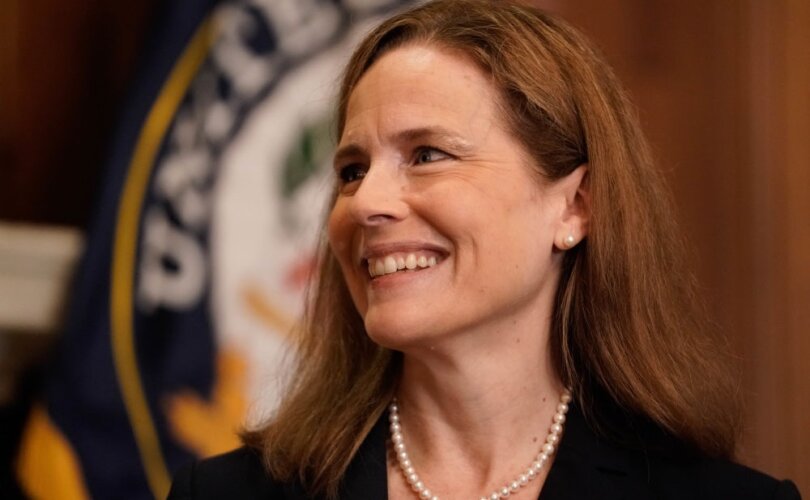 Barrett made the quip while being welcomed to the stage at the conservative Federalist Society’s National Lawyers Convention 40th anniversary gala on Thursday evening. As the roughly 2,000 lawyers attending the black-tie dinner applauded Barrett, she joked that the enthusiastic reception was far better than the noisy demonstrations of pro-abortion protesters outside her home.

“It’s really nice to have a lot of noise made not by protesters outside my house,” the 50-year-old conservative Catholic justice and mother of seven said, generating laughter and further applause.

Barrett’s remark about protesters came in reference to the pro-abortion activists who have rallied outside the homes of conservative Supreme Court justices — including Barrett’s — since the unprecedented leak of the Court’s draft opinion to overturn Roe v. Wade (1973) and Planned Parenthood v. Casey (1992) in May. Critics of the protests have suggested that they run afoul of a federal law prohibiting “picketing or parading” with the “intent of influencing any judge” in or near “a building or residence occupied or used by such judge.”

Despite the fact that a pro-abortion activist was charged with attempted murder after he allegedly traveled to Justice Brett Kavanaugh’s home with the intent to kill him, the Biden administration has refused to condemn protests outside the homes of justices.

After starting in May, the protests have continued even into November, months after the Court rolled back Roe.

And for the record, we are still demonstrating peacefully every week! Amy Coney Barrett’s neighborhood is infused with pro-choice energy nearly every Friday.

RELATED: Abortion activists rally outside home of Justice Amy Coney Barrett with blood-soaked clothes, baby dolls
Despite the persistent protests outside her home, Barrett’s Thursday joke about the situation was met with outrage from left-wing media outlets and commentators, who accused her of “flippantly” joking about the “pro-choice” activists while giving a talk at a “right-wing” or “far-right” convention (The Federalist Society doesn’t take positions on legal or policy issues but espouses conservative values).

“Amy Coney Barrett jokes about how ‘nice’ it is to not have to hear pro-choice protesters while being applauded at a far-right Federalist Society event,” said leftist podcaster Brian Tyler Cohen.

Amy Coney Barrett jokes about how “nice” it is to not have to hear pro-choice protestors while being applauded at a far-right Federalist Society event. pic.twitter.com/KffX4Y3KKG

Including Barrett, four of the five Supreme Court justices who voted to overturn the federal “right” to abortion established in Roe spoke at the Federalist Society’s gala.

Fox News noted that Justice Samuel Alito, who authored the landmark decision in Dobbs v. Jackson Women’s Health Organization to overturn Roe and Casey, received a standing ovation for his remarks at the event. Justices Kavanaugh and Neil Gorsuch also attended the dinner along with their colleagues Barrett and Alito.