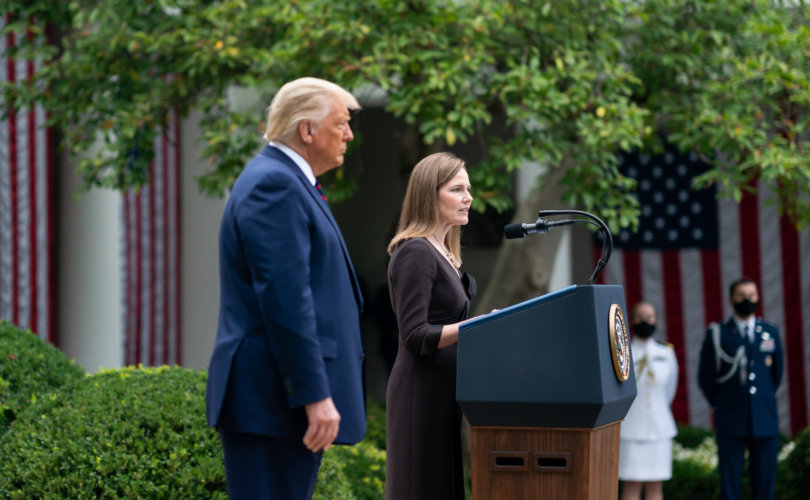 According to CNN, “Barrett’s initial failure to disclose the two events also raises questions about whether the questionnaire is complete or whether there will be any consequences from the Republican-led Senate Judiciary Committee, which oversees her confirmation hearing.”

“Past chairmen of the powerful committee have halted the nomination process after judicial nominees omitted information in their Senate paperwork,” the article continued, “but under committee Chairman Lindsey Graham that scenario is unlikely.”

In a letter dated October 9, Barrett wrote to Senate Judiciary Committee chairman Lindsey Graham and ranking member Dianne Feinstein. “Since submitting my response on September 29, 2020 to the Committee’s Questionnaire regarding my nomination, I have been made aware of some items that you may have already seen.”

“Although it is not clear their disclosure is formally responsive to the Questionnaire, I enclose supplemental responses (with attachments) to the Committee’s Questionnaire out of an abundance of caution,” she added.

CNN had first reported about the two pro-life events.

“In April 2013, Barrett gave a small hourlong seminar ‘for students on changes to law and life for women after Roe v. Wade’ entitled ‘Being a Woman After Roe.’”

Roe v. Wade is the 1973 Supreme Court ruling essentially legalizing abortion across the country under the guise of a woman’s right to privacy.

“According to a copy of the Facebook event advertising the seminar, spots were limited to 15 students,” CNN continued. “A student publication promoted the event as an informal seminar, small group setting in which students can learn more from faculty members who oppose abortion. ‘The Right to Life Seminar Series was begun as an opportunity for students and professors to discuss a variety of issues related to human life and dignity,’ an advertisement for the event reads.”

“The conservative judge also did not disclose that in November 2013 she spoke to Jus Vitae, the law school's Right to Life club, on ‘The Supreme Court's Abortion Jurisprudence,’” CNN wrote. “The law school advertised the lecture as focusing on Roe v. Wade and the cases that followed it, including cases that were being litigated on the lower courts at that time.”

“The lecture Barrett did disclose was entitled ‘Roe at 40: The Supreme Court, Abortion, and the Culture War that Followed,’ taking place in January 2013 and open to the university community.”

A YouTube video of the lecture had already been deleted in 2014, before Barrett was even considered for a position on a court.

The left-hand page is a list of names of people who signed onto the statement, “We, the following citizens of Michiana, oppose abortion on demand and support the right to life from fertilization to natural death.” Among the signatories was Barrett, at the time a law professor at the University of Notre Dame.

The right-hand page features copy declaring, “It’s time to put an end to the barbaric legacy of Roe v. Wade and restore laws that protect the lives of unborn children.”

Barrett has never made a secret of her pro-life views. She was a member of Notre Dame’s Faculty for Life group, signed a 2015 letter expressing “solidarity with our sisters in the developing world against what Pope Francis has described as ‘forms of ideological colonization which are out to destroy the family,’” and is reported to have signed another letter published by Becket Law criticizing the Obama administration’s contraception mandate.

She has also written multiple articles critical of the stare decisis doctrine, which grants weight to past rulings’ status as precedent, regardless of whether they were rightly decided. This could come in play during a Supreme Court case on abortion.

New York Cardinal Timothy Dolan, meanwhile, defended Barrett as a woman of faith. Referring to the 2017 hearings for her confirmation as a federal appeals judge, Dolan said, “There were some nasty comments: ‘We hear you take your faith seriously. We hear you really believe.’”

“When you look at some of that grilling in the past, it was like they were testing her on her faith,” Dolan said. “Well, that’s just out of bounds, folks.”

Barrett, whose hearings will begin at 9 a.m. Eastern time on Monday, emphasized in her letter on Friday that “(c)onsistent with the practice of prior nominees, I will continue to supplement the information provided to the Committee as appropriate.”