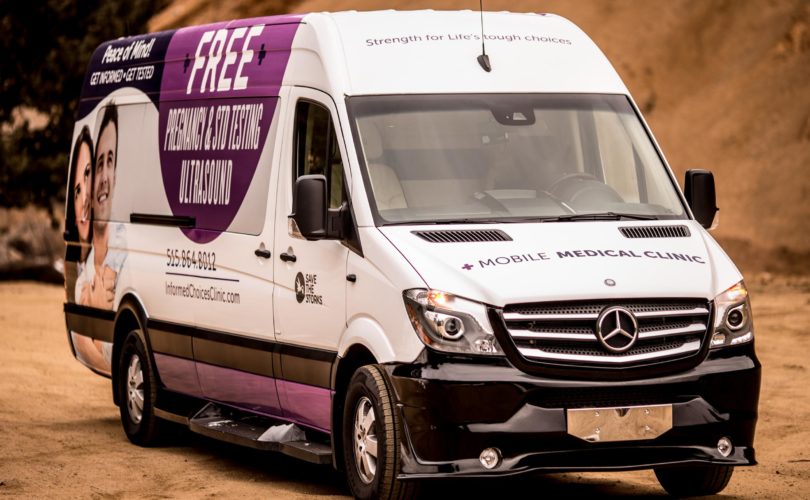 DALLAS, Texas, September 9, 13 (LifeSiteNews.com) – How can pro-lifers effectively reach out to women who are literally en route to abort their unborn babies? For the pro-life movement, that’s the million-dollar question.

Now one pro-life innovator, Joe Baker, founder and president of Save the Storks, believes he has found the answer: A mobile, fully-equipped, state-of-the-art medical center custom fitted into a Mercedes-Benz van, parked directly between the woman and the abortion clinic.

“Our mission is just to serve and to present the option to make a decision for life,” Baker told LifeSiteNews.com.

Bakers’ vans sport an image of a large stork flying with a wrapped bundle in its beak, with the words “Save the Storks” written in large letters across the side of the van.

According to Baker, the image of the large bird carrying a bundled baby breaks down barriers, since for many people, the stork has a comforting and somewhat nostalgic connection to motherhood and pregnancy.

The interior of the vans are equipped with massage chairs, an examination table, a toilet for pregnancy testing, and an ultrasound machine. They are designed to create a comfortable and confidential space in which an abortion-minded woman will feel welcomed and safe.

Everything is state-of-the-art, down to the iPad that controls various van functions.

The strategy is simple: park the van in front of the abortion clinic, or as closely as legally possible. Warmly offer women heading for the abortion clinic free services including professional consultation, a pregnancy test, and a sonogram if needed.

So far, the strategy is proving wildly successful: Three out of five women who board a Stork van choose to keep their baby, says the organization.

Each Stork crew, consisting of three to five people, includes councilors and a licensed sonographer. When an abortion-minded woman enters the van she is presented with the three possible choices before her: parenting, adoption, or abortion. Counselors go through each option, telling the woman how each decision could impact her.

“All of the counseling on the bus is really about the impact to ‘her’, how it’s going to be so much more beneficial to ‘her’ if she chooses one of the first two options,” said Baker.

Baker said that the abortion-minded woman intercepted by a Stork van tend to be “self-centered.” “It’s not at all un-normal for a girl to say something like: ‘Oh, I could never adopt out my baby’, and we’re sitting there at the abortion clinic!”

“If your mission isn’t to just love her and convince her that [parenting or adoption] is the best decision for her, you really could lose her,” he said.

However, while Baker said that Stork crews are trained to be “very woman-centered”, they also recognize that the baby is the “most vulnerable in the situation.”

Save the Storks has found that a woman will more likely choose life if she finds support during and after her pregnancy, if she is provided with necessary resources, and if she can see her baby through ultrasound.

Calling the sonogram “magic,” Baker said that when a woman having entered the Stork van sees her baby for the first time, “there’s a bond that happens that is like nothing else.”

The Stork van with its crew has advantages over traditional side-walk counseling. A woman intent on abortion has immediate access to services that might help her change her mind. The van offers a peaceful environment where women can think clearly about her decision. Counselors take down personal information so that they can stay in touch with the woman and offer her the support and resources she needs.

“We’re offering a professional operation, right there on the street,” Baker said.

Save the Storks so far has put vans in Dallas and Chicago. However, Baker has big plans for the future. His organization started a campaign this summer to put a van in every major city across America. The non-profit organization is appealing to pro-lifers around the country to help cover the $100,000 price tag per van.

Pro-abortion activists are not pleased by the Stork vans, calling them a “guerrilla anti-choice tactic”.

But pro-life leader Abby Johnson, a former Planned Parenthood clinic director before her conversion to the pro-life cause, called the Stork mobile ultrasound operation “incredibly important”.

“They are allowing women a true option…one that they won't have inside the abortion clinic walls,” she told LifeSiteNews.

“Save the Storks has a trendy, relevant marketing approach that appeals to young women. Every pro-life organization in this country should strive to better connect with the demographic they are trying to reach. Save the Storks has done just that,” she said.