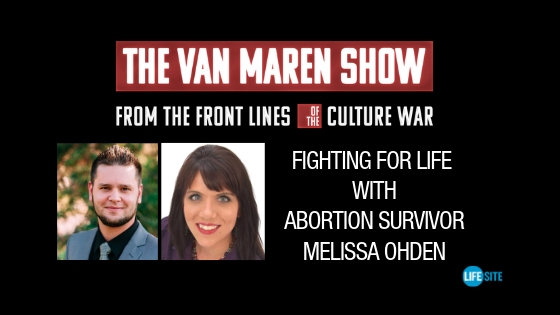 February 13, 2019 (LifeSiteNews) — Some politicians seem to think the only people impacted by abortion are the doctor and the woman who chooses to get one. The truth of the matter is that far more lives are affected by abortion.

In a new episode of The Van Maren Show, podcast host Jonathon Van Maren speaks with Melissa Ohden, a survivor of a saline abortion in 1977 that lasted five days.

Melissa’s moving story begins when her maternal grandmother, a nurse, forced her then-19-year-old biological mom, an unmarried college student, to get a secret abortion.

Unbelievably left to die for a whole five minutes after the abortion attempt failed, Melissa, weighing 2lbs. 14 ounces, was transported to the neonatal intensive care unit, where she was treated and adopted.

It wasn’t until age 14 that she learned she survived the abortion. It was devastating to know this, Ohden tells Van Maren. “I tried to run away,” she said, adding she was “in emotional pain” and “self-imploding.”

At the age of 30 with God’s help, she summoned the courage to tell her story publicly for the first time in 2007 at a Feminists for Life rally on Capitol Hill in Washington. “God had this plan for me to not keep my story secret,” she says. Most people hadn’t heard someone share their story, she adds. Initially it was hard to share it but not anymore. “More [stories like mine] are getting shared.”

Melissa explains in great detail what it was like to undertake the long and difficult process of tracking down her birth mother — who did not know she survived the abortion — and her family, and how their complex relationship was built up over time. She wrote about the experience in her highly-acclaimed 2017 book You Carried Me: A Daughter’s Memoir.

Ohden, who has testified in front on Congress and given many speeches, also touches on how poorly she is treated by pro-abortion lawmakers and Planned Parenthood employees.

In 2012, she founded The Abortion Survivors Network, which seeks to educate the public about failed abortions and survivors while providing emotional, mental, and spiritual support to abortion survivors. She has been in contact with over 210 survivors.

The Van Maren Show is hosted on numerous platforms, including Spotify, SoundCloud, and YouTube, so you can listen to the show by clicking the links. We are also on iTunes and Google Play.