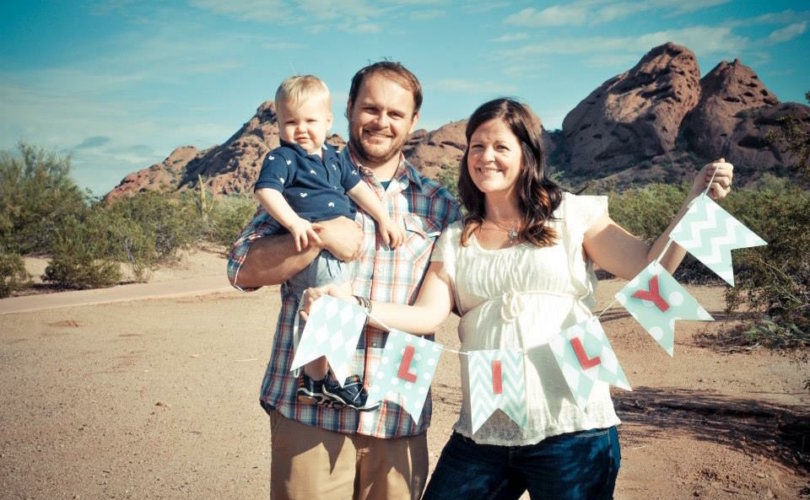 Happy clients Jason and Kellie Soper say Solidarity HealthShare is 'the way healthcare was intended to be.'

November 24, 2017 (LifeSiteNews) – Years into Obamacare’s implementation, many Americans still face prohibitive insurance costs, difficulty securing coverage and loss of choice in their healthcare providers. Those problems aside, serious conscience issues also persist for Christians and others over the controversial healthcare law’s subsidization of abortion, contraception and abortifacients.

Since last year Solidarity HealthShare has been offering an affordable alternative to insurance that is in keeping with Christian principles.

With the high cost and other Obamacare-associated troubles and its annual open enrollment period in process, Solidarity is making a special effort to reach out to Americans who may be particularly struggling with affording healthcare coverage.

“We just realized the working poor, single moms and veterans are really struggling right now trying to find a way to pay for healthcare,” said Solidarity HealthShare CEO Brad Hahn. “We could be a great solution to these groups.”

Hahn said the idea of reaching out specifically to moms grew out of Solidarity’s very founding, and is appropriate with moms being the decision-maker in many households, but also in providing a way for moms to care for their families.

What is a healthshare?

Many people may still be unfamiliar with how a healthshare plan works. But Hahn insists it is much more cost-effective. Solidarity HealthShare making financial accountability a priority, he says.

Medical cost sharing is an alternative to healthcare where members contribute each month and funds are allocated to pay members’ medical when costs are incurred.

Member contributions replace premiums and annual unshared amounts take the place of deductibles. The costs are typically significantly less than traditional insurance, especially as compared to the marked increases under Obamacare.

“We’re trying to get the word out to as many moms as we can,” Hahn said. “We want to reach and help as many moms as possible, and encourage them to look at this as a possible solution for their families.”

Kellie Soper of Arizona is one mom who had to live the downside of today’s negative healthcare climate amid great personal loss, to go on to see the great contrast with Solidarity HealthShare.

“Knowing our money is not going to something that’s going against our faith is just an added benefit,” she added.

She and husband Jason could not afford to add her to his insurance through his work, so Soper tried the ACA marketplace, learning she could not qualify because coverage was available through her husband’s employer. There was no consideration for the out-of-reach cost. Soper purchased insurance through Blue Cross Blue Shield of Arizona.

Tragically, the couple’s second child Lily died at birth from a physical defect. They knew Lily’s condition would be fatal, but Soper then also experienced complications in delivering Lily, which required bringing in an OB/GYN in an emergency situation.

It turned out that although the doctor was in the same office as Soper’s midwife, she was not in Soper’s Blue Cross Blue Shield of Arizona network.

There was an issue with the doctor’s services being covered, but for some inexplicable reason Soper would not learn of it until some eight months later.

While she and her family were still grieving the loss of Lily, she received a $6,000 bill because the insurance company was denying all of the charges associated with her delivery.

The hospital had coded the charges under pre-natal care instead of delivery, causing them to be rejected by BCBS. Soper had ongoing trouble with the hospital getting the error corrected. She also had to wrestle with the out-of-network issue, even though hers was an emergency situation with Lily’s delivery.

It took Soper upwards of two years of fighting with both the insurance company and the hospital to resolve the issue. It seemed as though there was no end. And it exacerbated her grief, bringing her loss to the forefront in the worst way.

“Every time I had to call someone,” she said, “it was anxiety, anxiousness.”

A step in the right direction, though not quite there

Soper would switch to another Christian healthshare medical plan prior to the resolution with BCBS.

Sadly, she suffered the loss of another child through miscarriage while still fighting to get her medical charges with Lily properly covered.

The healthshare plan paid on the charges for her miscarriage within four or so months, just a month or two after her charges for Lily’s delivery were finally resolved.

Soper said she was very happy with the Christian healthshare, but there still were issues.

She said it took too long to get reimbursed for medical costs, she didn’t have choice of provider and the healthshare didn’t cover preventive check-ups. She also had to pay extra quarterly for more coverage, the coverage level that is built into the cost at Solidarity HealthShare.

And Soper was negotiating bills herself.

“We were grieving already, and then we had to call every month,” she recalled for LifeSiteNews. “Especially going through something like that, when you’re having to call and negotiate bills.”

“They did eventually cover the charges, I’m truly grateful for that,” said Soper.

She joined Solidarity HealthShare in October of last year.

Since that time, she said Solidarity has been paying on her medical costs within a month.

“Which seems unheard of,” Soper said, “everything has been a super quick turnaround.”

Another change, she’s not having the same issues with out-of-network providers with Solidarity HealthShare.

“I want to say that the one thing you will never again have to hear are the words ‘out of network,’” Soper told LifeSiteNews.

“Life happens in a hospital,” she continued. “Things go wrong when you’re at the hospital. At what point in the middle of an emergency are you supposed to ask, ‘Are you in my network?’”

Soper is also happy to longer worry over extra costs for out-of-network charges.

The prospect of losing a provider has also gone by the wayside since she joined Solidarity HealthShare.

“That’s such a disservice to everyone when you have to continually find new providers,” she said.

There is also a personal touch Soper has experienced with Solidarity that she has not before.

“If I call them, it’s not 10 minutes getting through the automated systems listing all these departments,” she said. “You speak to a real person. If I’ve had to leave a message, they always return my call or email within a day or two.”

The way it should be

Soper is happy to move forward knowing she, Jason and Ted have their healthcare is secure.

“The way I see it, Solidarity HealthShare is the way healthcare was intended to be,” Soper told LifeSiteNews. “We give our money and whoever needs it at the moment will be provided for. It’s meant to be affordable, it’s meant to cover what you need covered and it’s mean to to allow you to choose your provider.”

The family has welcomed another baby into their home through foster care.

Solidarity HealthShare officially launched in July 2016 after years of development, forming in response to the 2010 passage of Obamacare.

“They need our support, they need a solution,” Hahn said of the nation’s moms, “and I think Solidarity HealthShare is the perfect solution for them.”

Members can enroll in Solidarity Healthshare any time, but open enrollment for Obamacare runs until December 15 in most states, and scheduled later for some states.

Specifics on Solidarity HealthShare can be found here.