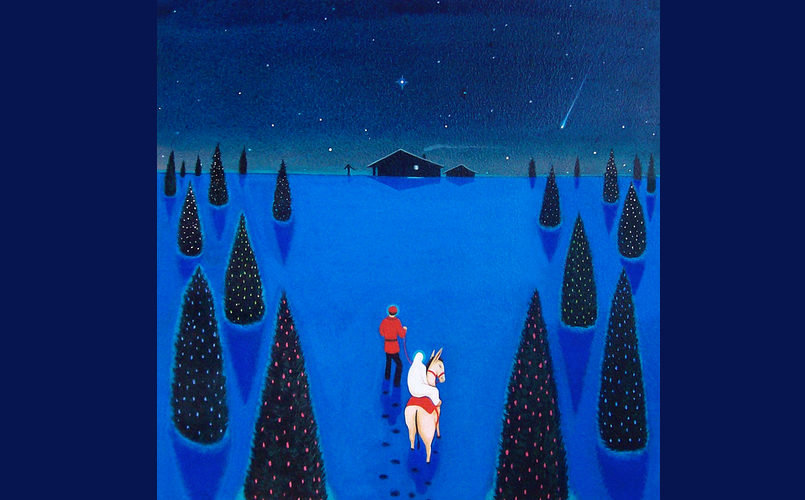 Editor’s note: LifeSiteNews is pleased to bring you this truly inspirational story of an artist who in his 20s decided to give all his talents to serving God and the Church, at the huge cost of being completely rejected and shunned by the world. It is a profound story of faith, the kind that moves mountains. May our faith in God’s providence over each and every one of us increase this Advent.

December 17, 2015 (LifeSiteNews) – I was very successful as a young artist in my early 20s. For example, the first exhibit of my work in a major gallery in Ottawa, paintings on nature and on human scenes, no overtly religious matter, was a complete success. There was a lot of media attention and promises of another show to follow.

In a year or two following that, as I was working towards a new show, it struck me in my heart, and my wife confirmed it, and was a moving factor behind me considering this question, why not do the impossible thing? Why not simply paint for Christ and his Church, without regard for the consequences?

So, on May 1, 1976, my wife and I went to our local parish in a little village in the Rocky Mountains and we put my paintbrushes under the altar — it was the feast of St. Joseph the Worker — and we made a prayer on our knees before the Blessed Sacrament, asking St. Joseph to pray for us, to take hold of this very, very fragile dream and very, very small life and do whatever God decides. So we consecrated my work entirely to the service of the Lord and his Church. And so began many years, decades of incredible movements of providence and incredible opposition. There are  just too many stories to tell you.

I had to travel around the country with my art because we were living in such a remote area. When I went back to the old galleries that had once seen me as the golden child or the cash cow and I showed them my new explicitly Christian work, they said, “We love your style very much, but you must understand that the art-buying public is no longer interested in this worldview.” Which was a nice way of saying, “Shape up to the revolution or get lost.”

So, I got lost for about two decades. I kept trying, kept applying for shows at major galleries. They loved the technique in all my work, but regarding the subject matter, their endless refrain was, in effect, “If you would simply delete the Christian content, or adapt it to contemporary tastes, we would be very happy to give you a show.”

STORY: Author Michael O’Brien’s humbling answer to question: ‘Who are these people at LifeSite?’

One year there were 11 such galleries that conditionally offered me a show, turned me down, offered me a show, cancelled the show. One gallery closed permanently just before my show was to open, another's curator was fired and the show cancelled, and at a third, the curator had a nervous breakdown and the gallery shut down…..it went on and on, a constant bizarre struggle. The net result was there was no exhibition of my explicitly Christian work.

Finally I realized that this was going nowhere. So I just tried to survive by painting commissions. A few years before this, I had received something interiorly, a story that erupted in my imagination. Was it a grace or was it just good old Irish imagination? I just didn't know, but because it was so compelling, so powerful, it was becoming obsessive and I had to get it out of my head. I wrote it down and it sat on a shelf for about a year.

Eventually I got the idea of sending it to a publisher in Canada. It was the same situation: Publisher after publisher said, “We love your writing style, love this story. However, the reading public is no longer interested in this world view.” By which they meant orthodox Catholicism. The book was not heavy-handed didactic, nor were my later books. They were just telling stories in which the reality of God's presence, the reality of the mysterious movements of the providence in human lives, was part of the story, as it is in reality. Its title was A Cry of Stone, but it wasn't published until more than twenty years later.

Then came about twenty years of collecting rejection letters for my novels and from art galleries, all of them subtly offering success if I would only adapt the faith dimension to a more “contemporary” worldview. But always there was an inner thread in me that said, “No, I'm not going to play by the world’s rules. This is how they are corrupting nearly everything. The lie controls most of contemporary culture, and I'm not going to cooperate.”

The temptation to compromises can come in many different forms, and so they did for me. But in the end, I always felt profound disgust at what was being done to us, the tyranny of the lie that covers the whole Western world. And I said to myself, “If I am never published I have done my best. I was here. It cannot be said that Christian culture was not present. It was here. And it was rejected. It was ghettoized. But we spoke the word that was given to us, and we lived it, in season and out of season.”

Part of coming to terms with this insane impossible life was to face, as a husband and father, the pain of being a failure. To be unable to provide security for my family, and throughout most of those 40 years, even comfort. We lived very simply. We still try to live very simply.

But this material poverty is only the surface of things. The deeper work that God does in all of us, regardless of our circumstances in life, is to take us to a more profound level of dependence on him. It can lead us to a condition of spiritual childhood, to become very little and trusting in God's hands, to do our part and to let him do the rest.

Eighteen years after writing my first unpublished novel, the general manager of Ignatius Press called me up one day because he had seen my collection of paintings on the Rosary, which my wife and I had self-published, and were distributing almost by hand. Ignatius Press had come across the book and had decided to distribute it.

In our phone conversation, the manager asked me if I had written anything else.

And I said, “Well, yes, but you wouldn't be interested in it.”

At this point I had written my novel Father Elijah. I was so discouraged about the whole thing, even though I knew I would never give up, never stop painting or writing according to what I was inspired to write or paint, I had come to believe that my work would never find an outlet. It would never find a place in the mainstream or anywhere in culture. So you can hear how the demon of discouragement, as St. Francis of Assisi would call it, had worked on me for many years.

I didn't want to waste anymore time building up false hopes. Ignatius Press, this dazzling star of orthodoxy in the U.S. was doing a phenomenal work, yes, but they didn't publish fiction at that time. However, the manager said, “Well, we might be interested. Why don't you try us? Send us the manuscript.”

I said, “I have to be frank: I'm going to send you the manuscript, and you are going to reject it. And I am going to lose $10 for postage that I do not have to spare.” He said, “Send us the manuscript and we’ll send you the $10,” which he promptly forgot to do. I should add that years later he slapped a ten dollar bill in my hand with a grin, and we both had a good laugh.

A few months after submitting my manuscript of Father Elijah, Ignatius Press sent me a contract for the publication of the book, which appeared in 1996. Since then my other novels have been published, and also my nonfiction.

‘We must never lose hope’

It was a very important lesson for me, looking back in hindsight, to see that we must never lose hope, and that if we are given a particular grace or calling, we must be willing to persist through, at times, very dark waters, understanding that there will come temptation for false relief from trials.

Some temptations are obvious. But there will come an alternative kind of temptation—to simply pursue a good life, a good faithful Catholic life, but to leave unfulfilled the particular calling and path that God has given you. Technically, no sins have been committed, but something is lost,  some fruitfulness for souls is lost to the world. We cannot measure — this we must keep in mind always — we cannot measure what the success or failure of our efforts is. It is not our task to measure them. That is God's business.

Our task is to be faithful to the inspirations, guided by reason and discernment always, but at the core is going forth in the face of the culture of death, in a dark time, with the light of Christ within us, in Christian hope. That willingness, the Lord can work with. That, the Lord can make fruitful, if we would only trust. I'm not talking about feelings of trust. Feelings of trust come and go. But the choice to trust, to put one step in front of another, as we cross the desert of the modern age. There, in the desert, many surprises await us. Scripture says the Lord is a God of surprises. And he certainly has been so in my life.

Anyway, I could go on and on and on. I would say, above all else, we must trust in the Lord in all circumstances. Trust in him absolutely. Entrust your whole life to him in prayer. And trust especially when there seems very little reason, on a human level, to trust. For that is often when he is doing his greatest work: On the cross. That is often, perhaps always, the very place from which fruitfulness comes.

Born in Ottawa in 1948, Michael O’Brien is the author of twenty-eight books, notably the novel Father Elijah and eleven other novels, which have been published in fourteen languages and widely reviewed in both secular and religious media in North America and Europe. His essays on faith and culture have appeared in international journals such as Communio, Catholic World Report, Catholic Dossier, Inside the Vatican, The Chesterton Review, LifeSite and others. For seven years he was the editor of the Catholic family magazine, Nazareth Journal. He lives with his wife Sheila in Barry’s Bay, Ontario.

This story is based on a video recorded talk given by Michael O’Brien on May 28, 2015 in Fort Worth, Texas. Corrections to the text have been made by Michael O’Brien. Michael became a member of the LifeSite board of directors this year.