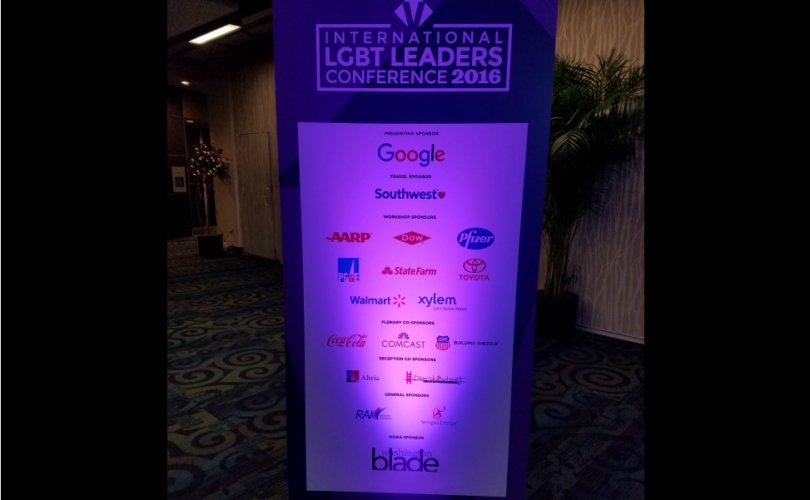 Major corporations like State Farm, Walmart, Comcast and Google funded the LGBT Leaders conference, as they do many other homosexual events. This banner was outside the main speaking area.Peter LaBarbera / LifeSiteNews

The first in a series to be published daily in the next week. Day two can be found here.

The conference, put on by the Gay and Lesbian Victory Institute — also known simply as the Victory Institute — was first envisioned as a recruiting event and strategy session to help place LGBTQ activists in a sympathetic Hillary Clinton administration.

But with Donald Trump's surprise victory on November 8, the event turned into a series of panel discussions on how to resist a Trump presidency and GOP-controlled Congress. The conference was hosted by the Washington Hilton Hotel, where President Ronald Reagan and three other men were shot in an assassination attempt in 1981.

LifeSiteNews attended the Victory Institute conference, which drew more than 500 homosexual, bisexual and “transgendered” lawmakers as well as allied political and corporate activists from across the globe. This is the first of several articles on the conference, which offered a glimpse into President Obama’s success in pushing his LGBTQ policies in the United States and abroad and how difficult it will be to overturn them if President-elect Trump is so inclined.

Victory Institute is associated with the Gay and Lesbian Victory Fund, a political action committee that works to elect openly homosexual, bisexual, and transgendered individuals to public office.

Among Victory Fund’s co-founders in 1991 is homosexual activist and major Democratic Party fundraiser Terry Bean, who in 2014 at age 66 was arrested by Portland, Oregon, police along with his 25-year-old ex-boyfriend, Kiah Lawson, on charges of sodomizing a 15-year-old boy. As LifeSiteNews reported, Bean, who is also a co-founder of the LGBTQ lobby group Human Rights Campaign, was charged with two felony charges of third-degree sodomy and one count of third-degree sex abuse.

The sex abuse charges against Bean were dropped after the boy fled and refused to testify following “an offer by Bean to end the case with a so-called 'civil compromise' in which Bean would pay the young man $225,000 and avoid a criminal trial,” Willamette Week reported. A transcript of a police interview with Lawson reveals that Bean reportedly knew the boy he was “hooking up” with sexually was underage and tried to coach him to say he was 18.

Far more than on the abortion issue, in the LGBTQ “culture war” the homosexual-transgender lobby has a huge advantage over its pro-family opponents in both funding and the number of fully engaged activists.

As homosexual power grew especially through two Obama terms, these conferences have gained more and more funding and sponsorships from large corporations, which have embraced the LGBTQ movement’s paradigm of viewing homosexualism and transgenderism strictly from a “civil rights” perspective.

The Victory Institute conference was no exception. Most speaker panels were sponsored by a major corporation whose representative gave opening remarks touting that company's commitment to LGBTQ issues.

Here are some of the themes observed at the International LGBT Leaders conference:

As if to serve as a bizarre testimony to the wider LGBTQ lobby’s commitment to “transgenderism” — dubbed “gender confusion” by pro-family critics — Victory Institute organizers turned the two public restrooms nearest the main speaking venues at the Washington Hilton into “Gender-Neutral Restrooms.”

Outside on a set of doors to the main conference venue and 10 feet from the main ground-floor restroom stood a white sign with black letters reading “GENDER NEUTURAL [sic] RESTROOMS” with “neutral” misspelled. Next to that was a large, hanging Victory Institute banner with the word “Restrooms” atop the name of the conference (see photo above). Interestingly, the same misspelled version of the word “Neutral” was also displayed on a sign outside another smaller restroom nearby designated as “Gender Neutural” [sic].

To confirm the contrived genderlessness of the conference bathrooms, the hotel covered up the familiar “male” and “female” signs that normally adjoin the entrances to each restroom, leaving two blank squares instead. This allowed male and female attendees (or anyone) to use any restroom they wanted. (Other LGBTQ organizations like the National LGBTQ Task Force use similar “bathroom activism” at their events, as observed by this reporter.)

As a “cisgender” (normally “gendered”) heterosexual man needing to use the facilities, I wondered which “gender neutral” restroom to use, hoping to end up in the one with standing urinals for men. I nervously veered to the restroom on the left, but seeing someone in a dress exiting, quickly turned around and went into the restroom on the right. The curious thing is that, judging by “his” (?) appearance and big-boned frame, it might well have been an actual man underneath that dress.

Such is the “queer” atmosphere of LGBTQ activism in which “gender” is perceived as a socially-constructed, subjective choice rather than a biological reality. Transgender activism, once largely perceived as a hindrance to the passage of “gay rights” legislation due to its more radical nature, is now front-and-center in the LGBTQ’s movement’s revolutionary campaign to reinvent sex and gender norms in the name of “equality.”

On Sunday, a day after the Victory Institute conference was over, a visit to the same Washington Hilton Hotel restroom found the traditional “male” and “female” signs restored to their proper places adjoining the entrances of each sex’s bathroom.

A future article will report on how so many major corporations are pushing LGBTQ policies to the point of becoming culture-war power players in stopping social conservative legislation. That includes laws designed to protect the freedom of citizens and small businesses not to participate in homosexual “marriages” and other aspects of the gay-trans agenda, according to the dictates of their conscience.

As the reader will observe from these reports, homosexual and transgender activists lean heavily left and toward the Democratic Party. No panelists were seen speaking in support of Donald Trump or the Republican Party, and no homosexual Republicans, much less traditional GOP conservatives, were represented.

Two days after Trump’s electoral win, Victory Fund President & CEO Aisha C. Moodie-Mills issued a statement that read in part, “Today I am heartbroken that racist, xenophobic, sexist and transphobic demagoguery won last night’s presidential election.” Time will tell whether major corporations ostensibly serving consumers of all persuasions — from far-left progressives to tea party conservatives — will pay a price for financing and aligning so closely with leftist LGBTQ politics of this sort.