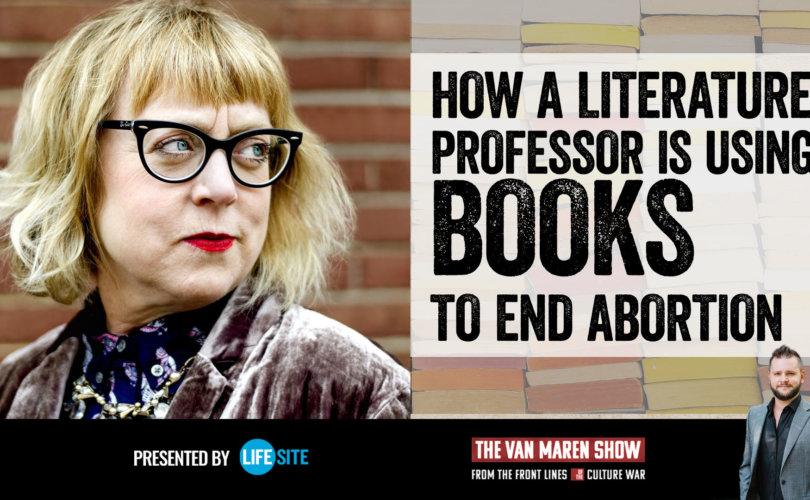 January 8, 2019 (LifeSiteNews) – In today’s episode of The Van Maren Show, Jonathon Van Maren speaks with acclaimed author and professor Karen Swallow Prior. Dr. Swallow Prior is well-known for her work as a teacher of literature and her books: Fierce Convictions, On Reading Well, and Booked. What many people might not realize is she has a deep history as a pro-life activist. Swallow Prior was arrested many times for blocking the doors of abortion facilities in order to speak to women before they entered.

Van Maren and Swallow Prior speak about how something one might not expect will play a key role in the abortion debate: literature!

After seeing The Silent Scream at her church, Swallow Prior began volunteering at her local crisis pregnancy center. When Operation Rescue came to her city, she and her husband went to a local abortion center with about a dozen or so people to pray and sing hymns. She was arrested that day – the first arrest of many.

Swallow Prior admits she was a bit naïve when she first joined the movement, thinking, “people disagree, you know? I'm an activist and we can disagree with one another, but activism is cool.” It was as she continued in the movement that she realized how many political and ideological movements are so closely tied to or dependent upon abortion.

She talks about the difficulties she faced as a PhD student at a state university as she became more involved in Operation Rescue and eventually became a high-profile activist. One professor commented that Swallow Prior’s grade most likely dropped due to the demands of her illegal anti-abortion activities. There were also professors who refused to serve on her dissertation committee.

In the mid 1980s, the pro-life movement was excited, thinking Roe v. Wade would be overturned by the Reagan-stacked court. Instead, in the early 1990s, the movement faced some very harsh blows. It was during this time that the FACE law, the Freedom of Access to Clinic Entrances Act, was passed, which greatly increased the jail time and fines levied for Operation Rescue-type missions.

It was also in the early 1990s that there was a rash of violence against abortionists by pro-lifers. Swallow Prior recounts the time she was awoken in the middle of the night to the news that abortionist Barnett Slepian had been assassinated in his home by a pro-life activist. This news caused Swallow Prior to really reflect on the language and rhetoric being used by some in the movement.

Swallow Prior argues that language is a significant part of what makes us human. She discusses the important role that language plays in the pro-life movement. She states that even using the terms “pro-life” and “pro-choice” shifts the focus of the debate and actually helps the pro-abortion side. The terms used before Roe v. Wade, “anti-abortion rights” and “pro-abortion rights,” are far more accurate, according to Swallow Prior.

Literature can also be used to understand what inspires pro-abortion activists to support the murder of innocent children, which pro-life activists can then address. Swallow Prior and Van Maren discuss some of the pro-abortion literature and poems that have had a powerful impact on the movement and what pro-lifers can learn from them.

There are many authors, including Pulitzer Prize winners, who have focused on or addressed abortion in their writing, including Ernest Hemmingway and F. Scott Fitzgerald, but the prevelance of it in literature isn’t well-known to most people.

Sharon Olds, a pro-abortion feminist and Pulitzer Prize winner, compares abortion to car accidents. She writes of her unborn children reaching out to her: “I can feel just one of them standing on the edge of a cliff by the sea in the dark, stretching its arms out desperately to me.”

Van Maren also points out the personal ties many authors had to abortion. Many now-famous authors, especially from the beatnik generation, forced their wives to have abortions so they could focus on their careers. Van Maren highlights the almost universal acceptance of this among male authors such as Allen Ginsberg, Jack Kerouac, John Steinbeck, and Ernest Hemingway.

Swallow Prior doesn’t advocate boycotting books written by these authors, but instead encourages people to read them understanding the author’s background. She tells listeners that these are great examples of how we can all compartmentalize and be inconsistent in our beliefs and expression of those beliefs.

Both Swallow Prior and Van Maren encourage people to read more literature to help form one’s moral compass, strengthen pro-life arguments, and to allow us to return to a central part of being human that we’re losing today: language.