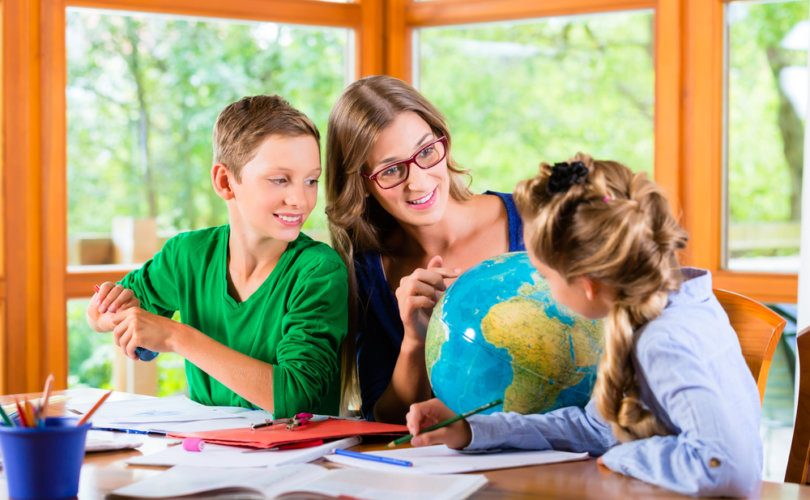 The equivalent of the US Supreme Court judges decided last Friday that from now on, parents must obtain permission to home-school from local authorities, instead of simply producing a declaration that they have opted for this form of instruction within the family as was the case to date.

It is in fact a general ban on home-schooling, with individual exceptions, instead of a general authorization which the authorities could retract in individual cases.

Further measures will tighten state control on France’s growing network of independent schools that receive no state funds, allowing local “préfets” – representatives of the administration in France’s “départements” or local administrative units – to decide to close such an establishment without the intervention of a judiciary judge. This network includes a large number of Catholic independent schools where traditional teaching methods are the rule, while the official Catholic schools under contract with the state have state-paid teachers and are expected to apply the public curriculum and teaching methods.

Home-schooling in France was already partially restricted in 2011 when tighter controls were set up – families who choose to home-school are normally “inspected” once a year – and the grouping of children from different families for classes was forbidden. Some 30,000 to 50,000 children are home-schooled in France at the present time.

The new legislation, which contains a wide range of dispositions against so-called “separatism,” was passed on July 23 during the extraordinary session of Parliament that also saw the adoption of the “sanitary pass” and mandatory vaccination of health workers. Public freedoms are receiving blow upon blow, and in a recent poll 43 percent of French citizens agreed with the proposition that France is becoming a “dictatorship.”

It is indeed remarkable that the dismantling of fundamental rights in France is so widespread and concentrated in time. It ranges from the new “apartheid” that allows access to leisure, cultural, and sports facilities as well as restaurants and bars, large shopping centers, and long-distance transport only to holders of a sanitary pass proving COVID vaccination or negativity to renewed masking mandates outdoors in a number of French towns, and now to the primary right of parents to educate and instruct their own children.

Why “separatism?” The legislation’s official title runs like this: “Bill to strengthen the respect of the principles of the Republic.” It was triggered by Islamic terrorist attacks over recent years and aims to fight radical Islam without calling it by name. Massive immigration from Muslim countries has allowed extremist groups and individuals to flourish in ethnic suburbs while at the same time pervasive “anti-racist” ideology and legislation practically prohibit politicians and media from identifying the cause of the problem. Thus “separatism” is a euphemism for Islamic activism – but it also allows the authorities to cast a wider net to include all religions that do not accept the “Republican” mindset in which “LGBT rights” and “minority rights” play an ever-increasing role. The concept also allows the specificity of Islam, which is at once a religion and a political system that covers all aspects of everyday life, to be ignored.

As a result, the new bill, which includes measures against authorizing and giving public funds to associations that do not observe the “principles of the Republic,” as well as provisions preventing the spread of personal information about public functionaries, law-enforcement officers, has been phrased in a general way that will potentially be used against other groups. Only time will tell if traditional Christian groups will be targeted under the law, but the general ban on home-schooling will certainly affect them.

Under Emmanuel Macron, the president who wants to turn France into a “start-up nation,” schooling already became mandatory between ages 3 and 16 in 2019, instead of between ages 6 and 16 as was previously the case. An overwhelming majority of children in France join public or private schools at the tender age of 3 anyway, as they offer the equivalent of day-care from 8 a.m. to 4:30 p.m. for working mothers four days a week. But before the 2019 law, families did have the choice of keeping kids at home until they turned 6 with no formalities involved, and many took avail of it.

The most recent law that was just approved by France’s Constitutional Court has introduced restrictive conditions for parents to obtain permission to home-school, despite opposition from right-wing deputies and senators who called the measures “contrary to the principle of freedom of education” that is still in force.

Parents who apply for such permission will need to prove that one of the following motives can justify “instruction within the family”: the child’s state of health or a handicap; intensive practice of sports or artistic activities; the family’s roaming lifestyle in France or geographical remoteness from any public school; or the existence of a situation specific to the child motivating the educational project, provided that the persons responsible for the child can justify the competence of the person(s) in charge of educating the child within the family while respecting the child’s best interests. For this last motive, families will have to present a written description of their teaching plan.

Permission will be given for one year only, meaning that families will be forced to present a full new request for every school year.

Situations are expected to differ from one place to another. The “state authority competent in matters of education” that will give permission will be a representative of one of the regional “Academies” linked to the Ministry for Education, and some may show themselves to be more flexible than others. Parents may appeal a negative decision. All in all, yet another of France’s famed administrative gas-plants is being set up, with administrative complexities deterring parents from going ahead to do what they judge is best for their child.

Home-schooling, or “instruction within the family” as it is officially called, has been explicitly legal in France since 1882 when a law made schooling compulsory, but not school attendance. It is the receiving of instruction that is considered a right of the child that parents must attend to. The 1882 law recognized that the obligation could be fulfilled either by sending offspring to “a public or a private school” (historically, “private” schools are mostly Catholic), or by giving instruction “in families.”

The Constitutional Court rejected this approach. In its decision validating the restrictions on home-schooling, it argued that instruction within the family, according to the 1882 law, was simply one of the available “modalities” of compulsory instruction, not “a component of the fundamental principles of freedom of education recognized by the laws of the Republic.”

For many parents, the COVID lockdown from March to May 2020 – the only time when primary and secondary schools were completely shut in France –offered a rare opportunity to identify the deficiencies of the public school system, and to take at least part of the instruction of their children into their own hands.

For faithful Catholics, the sad failings of religious instruction in public schools and in official Catholic schools, as well as the heavily loaded ideological leanings of the public curriculum, have already caused many to choose independent schools or instruction within the family.

Another issue is worrying many parents: Emmanuel Macron had stated that he did not intend to make the sanitary pass compulsory in educational institutions, but he said the same of restaurants and cinemas. Months later, he introduced the pass in many “everyday” venues and set up mandatory vaccines for health workers despite solemn promises that he never would. It has already been announced by the government that “vaccination campaigns” will be deployed in secondary schools as of September.

It is precisely as interest in home-schooling is growing that the French government has brought its attack on parental rights and freedoms to fruition. And the Constitutional Court, supposed to protect individual liberties, doesn’t even see the problem: it formally rejected demands from several parliamentarians who wanted home-schooling to be allowed on “political, religious, or philosophic grounds.” It replied merely that decisions on individual cases must “exclude any kind of discrimination whatsoever.”

When Macron announced the end of home-schooling last October, he hoped it would enter into effect as “a change of paradigm” as of September 2021. He said: “School is the republican melting pot. It’s what makes it possible for us to protect our children in a complete way from any religious sign, from religion. It is truly the heart of the space of secularism, and it is this place where we form consciences so that children become free, rational citizens, able to choose their own lives.”