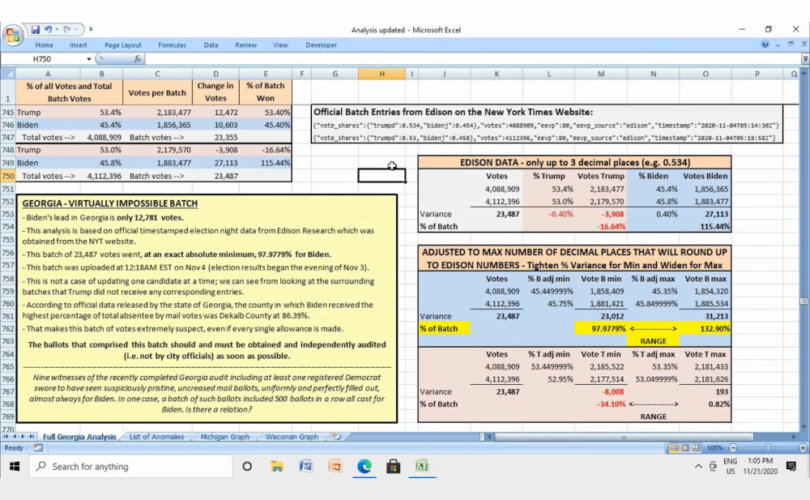 November 25, 2020 (LifeSiteNews) — A bombshell analysis of election night data from the state of Georgia appears to show a statistically impossible vote count update, with pro-abortion Democrat Joe Biden receiving at least 98 percent of a new batch of votes counted at 12:18 a.m.

On a channel called Endeez, a YouTube user worked through the math to show that in Georgia, Biden received roughly 98 percent of votes of a batch containing 23,487 ballots. Biden leads in the state by only 12,781 votes. He emphasized that the candidates were not updated separately, but rather at the same time, noting that the numbers show that “Trump did not receive any corresponding entries for Biden’s batch.”

The Endeez analyst displayed timestamped election night data from Edison Research obtained from the New York Times website to help show how he calculated the anomaly. While the total number of votes in each new batch was given, the numbers did not reveal precisely the number of votes for each candidate, but rather showed the percentage of total votes that each candidate held after each new batch of votes was accounted for.

He explained that because the percentage-based updates were only calculated to one-tenth of a percent, they could not precisely capture the number of votes allotted to each candidate. He accounted for this leeway, and showed both the minimum and maximum number of votes for each candidate that the given percentage update could signify.

The analyst honed in on the “damning” vote batch, which at first glance does not seem problematic. It indicated that Biden now received 45.8 percent of the total vote, a jump from his previous share of 45.4 percent of votes.

Statistically speaking, he pointed out, this was a much higher portion of votes than even the highest-reported allocation to Biden in a Georgia batch of absentee ballots.

“According to official data released by the state of Georgia, the county in which Biden received the highest percentage of total absentee by mail votes was Dekalb [sic] County at 86.39% (a whole other can of worms).”

“That makes this batch of votes extremely suspect, even if every single allowance is made and assuming it's 100% mail-in [votes] from the most heavily Democratic county,” he noted.

The analyst cited the Epoch Times’ report of Georgia witnesses to apparent voter fraud: “Nine witnesses of the recently completed Georgia audit including at least one registered Democrat swore to have seen ‘suspiciously pristine, uncreased mail ballots, uniformly and perfectly filled out, almost always for Biden. In one case, a batch of such ballots included 500 ballots in a row all cast for Biden.’ Is there a relation?”

“This is some of the strongest and hardest evidence I've seen for a very significant anomaly that I think can't be brushed off,” he concluded.