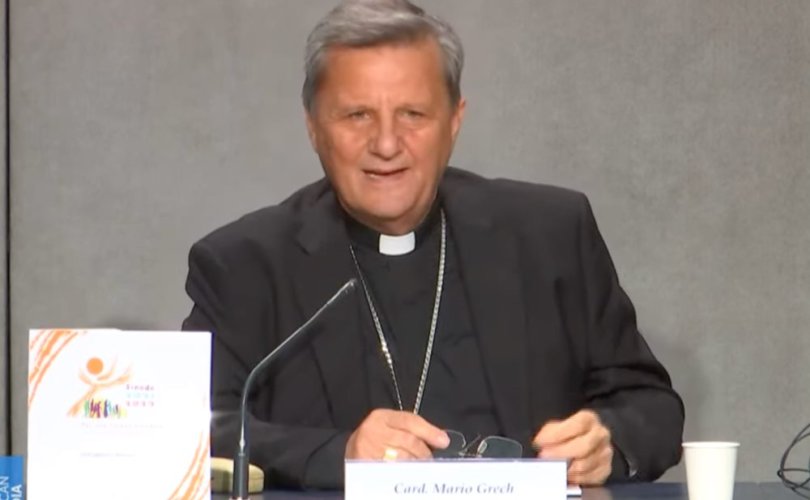 VATICAN CITY (LifeSiteNews) – The Vatican has revealed that the “decisive” process of the two-year Synod on Synodality will be based on “listening” to “people who have left the practice of the faith” and on “inter-religious dialogue.”

At a Vatican press conference September 7, Cardinal Mario Grech, Secretary General of the General Secretariat of the Synod of Bishops, introduced the vademecum (handbook) and the preparatory document for the multi-year Synod on Synodality.

The theme for the event, “For a synodal Church: communion, participation and mission,” is built upon the Second Vatican Council’s concept of synodality and the concept of “listening to the People of God.”

The shorter preparatory document contains a summary of the process, as well as the chief themes or “thematic nuclei” to be addressed. Its accompanying vademecum or handbook, which is available only in English, contains an in-depth explanation of how the Synod is to be conducted while elaborating on the central themes of dialogue, ecumenism, and listening. It also includes prayers for the local Synodal meetings.

The documents were met with concern by author Deacon Nick Donnelly, who told LifeSiteNews that there is “fundamental error that threatens to wreak further havoc” in the documents: a misunderstanding of the sensus fidelium.

The Synod will open on October 9 in Rome and then move to the world’s local dioceses on October 17. Diocesan discussions will be based on the vademecum and the preparatory document although bishops are urged to adapt the documents to suit local situations. While diocesan bishops are reminded that their ministry is “to be pastors, teachers, and priests of sacred worship… authentic guardians, interpreters, and witnesses to the faith of the Church,” the vademecum directs that “key role of the Bishop is to listen.”

After conducting this consultation process, diocesan bishops will then submit the results of the local discussions by April 2022. These will inform the working document or instrumentum laboris. This will be discussed at seven continental meetings of bishops’ conferences, held in Africa, Oceania, Asia, the Middle East, Latin America, Europe, and North America.

The overall process will conclude with the October 2023 Synod of Bishops in Rome when the bishops will assess a second version of the instrumentum laboris.

While two years has been set aside for the Synod, the mass of material demanded by the preparatory documents could make even a two-year limit an ambitious one for the scope of the proposed process.

The vademecum opens by stating: “Pope Francis is calling the Church to rediscover its deeply synodal nature” which “will involve a process of humbly learning together how God is calling us to be as the Church in the third millennium.”

Renewal, wider understanding, and dialogue were the main themes of the vademecum, which drew heavily from Pope Francis’s words on Synodality as an underlying guide for the text.

“Synodality represents the path by which the Church can be renewed by the action of the Holy Spirit, listening together to what God has to say to his people,” continued the vademecum.

Noting how Francis had declared the theme of Synodality “decisive” for the Church’s “life and mission,” the proposed Synod, based on ecumenical dialogue and “listening” to non-practicing Catholics, is described as a response to the “renewal of the Church proposed by the Second Vatican Council.”

Expanding upon the view of Synodality as perceived in the documents of Vatican II, Synodality is thus something which is to be “the path for the entire People of God.” Such a process involves opening the hierarchical structure of the Church to be more of a center for dialogue, less of a school of instruction: “the teaching authority of the Pope and the bishops is in dialogue with the sensus fidelium.”

The underlying question in the multi-year process is thus: “How does this ‘journeying together’ take place today on different levels (from the local level to the universal one), allowing the Church to proclaim the Gospel? and what steps is the Spirit inviting us to take in order to grow as a synodal Church?”

While such a question is to be answered by examining Scripture and the Tradition of the Church, the vademecum noted that it is also to be done by listening “especially to those at the margins, discerning the signs of the times.”

Repeating often the insistence on this element, the vademecum continues: “Whatever the local circumstances, the Diocesan Contact Person(s) are encouraged to focus on maximum inclusion and participation, reaching out to involve the greatest number of people possible, and especially those on the periphery who are often excluded and forgotten.” (Emphasis original)

The document expressly stated that the process of “listening” must include “Catholics who rarely or never practice their faith, etc.” [sic]

Furthermore, the documents demand that the “act of discerning” entails listening to “people who have left the practice of the faith, people of other faith traditions, people of no religious belief, etc.” [sic]

“No one – no matter their religious affiliation – should be excluded from sharing their perspective and experiences, insofar as they want to help the Church on her synodal journey of seeking what is good and true,” reads the text. (Emphasis original.)

It also highlights the “temptation not to look beyond the visible confines of the Church” as a problem to be avoided.

In addition to great emphasis on “listening, dialogue,” the planned purpose for the Synod involves “sharing… conversion… being inclusive…journeying together…  interreligious dialogue…” as well as addressing the “virus of self-sufficiency” and the “scourge of clericalism.”

Echoing the language of Vatican II, and quoting from its documents, the preparatory document defended the multi-year Synod on Synodality as occurring at a time “marked by epochal changes in society and by a crucial transition in the life of the Church, which cannot be ignored.”

The document referenced the recent liturgical changes made by Pope Francis, particularly his institution of female lectors and acolytes (decried by liturgical experts), as a welcome process in the necessary change.

Using Pope Francis’s words, the document added that the “meaning of the journey to which we are all called is above all that of discovering the face and form of a synodal Church, in which ‘everyone has something to learn’.”

This theme is more brightly illuminated when read alongside the vademecum, which outlines how the “listening” process will include non-Catholics – and Catholics who no longer practice the faith – in order to complete the Church’s Synodal “act of discerning.”

The theme of “journeying together” is to be understood in two manners, noted the document. The first examines how the various members of the Church are related to each other and to “brothers and sisters of other Christian denominations.” The second focusses on the relationship, “dialogue, and possible common initiatives” with “other religions,” movements, and even political, financial, or popular movements.

With the documents providing an insight into the process of the Synod on Synodality, some Catholics have taken to Twitter to express their contempt for the texts, coining the phrase “This is the Church of Monty Python.”

Meanwhile, U.K. commentator and author Deacon Nick Donnelly spoke to LifeSiteNews to warn of a “fundamental error” in the documents.

“At the heart of the vademecum’s call for a consultation with everyone, including the lapsed, non-Catholic, and non-believing, about the future of the Church is a fundamental error that threatens to wreck further havoc,” Donnelly stated.

“Its truncated presentation of Lumen Gentium (LG) 12’s definition of the sensus fidelium omits the most essential element necessary for its authentic exercise — the obedience of faith,” he continued.

“The omitted section of LG 12 refers to the importance of ‘…faithful and respectful obedience to which the people of God accepts that which is not just the word of men but truly the word of God. Through it, the people of God adheres unwaveringly to the faith given once and for all to the saints, penetrates it more deeply with right thinking, and applies it more fully in its life’.”

The English permanent deacon noted that according to this document, promulgated at Vatican II, “those ‘people who have left the practice of the faith, people of other faith traditions, people of no religious belief’ can have no part in expressing the sensus fidelium.”

“By corrupting the meaning of the sensus fidelium this consultation is in danger of proclaiming a false and worldly message instead of the Gospel of Christ,” he said.

Back in May, Dr. Peter Kwasniewski warned LifeSiteNews about the dangers in the modern understanding of synodality, declaring that “we see a continual submersion in bureaucracy, a surrender to the modern mentality of administration as the cure for all evils, which keeps the Church busy gazing at its navel while real evangelization withers and the pews empty out.”