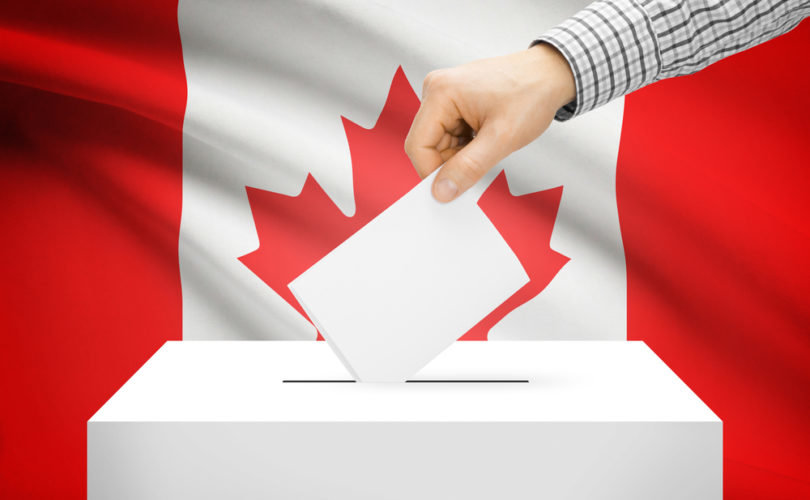 OTTAWA, Ontario (LifeSiteNews) – With the Canadian federal elections fast approaching, Canadians might be wondering where the various candidates stand on issues pertaining to life, family, and freedom. This article provides an overview of the ideas and voting records of the leaders of the most high-profile federal parties.

The current prime minister has consistently taken positions against the values of pro-life Canadians and, despite being a baptized Catholic who married in the Church, has admitted to being out of step with the Catholic faith. In 2009 Justin Trudeau stated: “As a politician I have political positions on gay marriage and on abortion that don’t at all resemble those of the Catholic Church.”

Trudeau has consistently advocated for anti-life positions, regarding both abortion and euthanasia, and even called abortion a “fundamental right” when referencing his opposition to a Conservative MP’s motion to condemn sex-selective abortion.

Under Trudeau’s watch euthanasia was officially legalized, and he voted to expand the reach of euthanasia by supporting Bill C-7. This bill makes it easier for Canadians to be killed by doctors, even when mentally ill.

Trudeau even voted against Bill C-510, which aimed to protect pregnant women from coercion to abort.

Trudeau publicly supported various LGBT causes and was the first Canadian prime minister to march in a Pride parade.

Trudeau has supported Bill C-10, which would let the Canadian Radio-television and Telecommunications Commission regulate the internet and social media in line with their regulations for broadcasting services.

Recently, Trudeau has also stoked fear and inculcated a segregation mentality into Canadians by demonizing Canadians who choose not to take the novel COVID-19 jabs as “anti-vaxxers,” a danger to society.

Erin O’Toole has stated publicly that he is pro-abortion and that he has always been so. He has not been as outspoken in his support of anti-life or anti-family positions as Trudeau, but he has lent his support to anti-life and anti-family causes and laws.

O’Toole did vote in support of Bill C36, which aimed to protect exploited persons from prostitution by criminalizing pimps and the purchase of human beings for sex. In 2016 he supported an amendment to the Liberal government’s pro-euthanasia Bill C-14 to protect freedom of conscience for doctors, nurses, pharmacists, and healthcare institutions to refuse to participate in euthanasia, either directly or indirectly. The bill was defeated, however.

In 2016 he voted for Bill C225, known as “Cassie & Molly’s Law” bill.  The bill aimed at amending the Criminal Code to make it a separate offence to kill or injure a preborn child while committing  a violent crime against a woman with the knowledge that she is pregnant. Strict minimum sentences were also proposed as part of the bill if the unborn child was killed or injured.

Since he became the leader of the Conservative Party, O’Toole has taken a more overtly pro-abortion stance. In June, he voted in opposition of Bill C-233, which sought to criminalize sex-selective abortion; thus, O’Toole seemingly lent his support to aborting infants based on their gender.

O’Toole has been less severe than Trudeau and NDP leader Jagmeet Singh regarding mandatory vaccinations; however, he has still taken a hard line with his own candidates, saying they must either be tested daily or be vaccinated in order to run for office under the Conservative Party banner. He also supported the Trudeau government’s mandate of obligatory jabs for domestic air travel but said he would accept mandatory testing for those who are not vaccinated.

The CPC leader has said that he would support a national certified vaccine passport, although it is not clear whether it would be required for domestic use or just serve as a standard document for Canadians to use where required.

— Article continues below Petition —
PETITION: Ban COVID vaccine mandates for schools and universities!
Show Petition Text
42205 have signed the petition.
Let's get to 45000!
Thank you for signing this petition!
Add your signature:
Show Petition Text

The leader of the NDP repeatedly voted against life and the rights of families and Christians during his time as a member of provincial parliament (MPP) in Ontario.

As an MPP, Jagmeet Singh voted for Bill 89, legislation that gave Children’s Aid agencies the power to ban Christian and other faith-based couples from adopting children and the additional power to seize biological children from parents who disagree with LGBT and transgender ideologies.

He also voted for the provincial Bill 28 that banned the words “mother” and “father” from Ontario law and socially-engineered the family such that children can now have up to 4 legal parents, none of them blood-related.

The current NDP leader voted for legislation that sought to force Catholic schools to work with organizations that advocate against traditional teachings on marriage, and for a further sexualization of the health curriculum in Ontario.

Singh tweeted in 2019: “Abortion is a fundamental right – and I’m glad Trudeau will say so to Pence today. But here in Canada we need to go further than committing to being #ProChoice – we need to push for better access and universal coverage so no woman who chooses abortion is unable to get one.”

Singh has also been a staunch advocate of vaccine passports, and has even suggested that Trudeau has not moved quickly enough on the issue of national vaccination certification.

The leader of the People’s Party of Canada has a mixed record regarding pro-life and pro-family legislation. In the past, Maxime Bernier has intimated that he is apathetically pro-choice, and his party, the PPC, doesn’t have an official stance on the issue.

However, his supporters are largely Christian, and many of his rallies open with speeches from conservative Christian pastors and candidates, such as Randy Hillier. At a recent event in BC with Tanya Gaw of Action4Canada, Bernier listened as Gaw brought up the horror of sex-selective abortion. Bernier was visibly supportive of the crowd when they agreed with Gaw’s appeal for legislation against the practise.

A speaker at the same event said that Bernier would support any member of his party bringing up a bill like the Heartbeat Bill in Texas, which effectively banned abortion after six-weeks’ gestation.

Whether or not Bernier personally believes that abortion should be allowed in the early stages of a pregnancy remains unclear at this point, as his view seem to have evolved on the issue. However, he has not commented directly.

Bernier does not have a consistent pro-family voting record, having supported a resolution at a 2016 Conservative Party convention that would abolish the party’s long support of the definition of marriage as a legal relationship between one man and one woman.

He also voted in favour of Bill C-16 which enshrined “Gender Identity” and “Gender Expression” into Canada’s Criminal Code and Human Rights Act. However, Bernier later said publicly that he regretted doing so, and that he had reversed his position.

Bernier has been unequivocal in his opposition to mandatory vaccines and has been at the heart of the anti-lockdown movement in Canada. He has expressed on numerous occasions that the measures taken by governments to strip Canadians of their constitutional rights are wrong.

He is currently the only leader of a major party who is explicitly against lockdowns and any vaccine coercion.

The leader of the Green Party has no voting record as she has never served in parliament.

Annamie Paul is proudly anti-life and will not allow pro-life views in her party. She also supports all LGBT talking points.

Paul has said that vaccine passports are something her party is “considering very seriously.” She has not said whether the Greens are officially for or against mandated vaccines.

Rod Taylor is a devout Christian and holds a biblical worldview. He supports all pro-life efforts and actions in support of the traditional family.

He has never been elected to public office and therefore has no voting record.