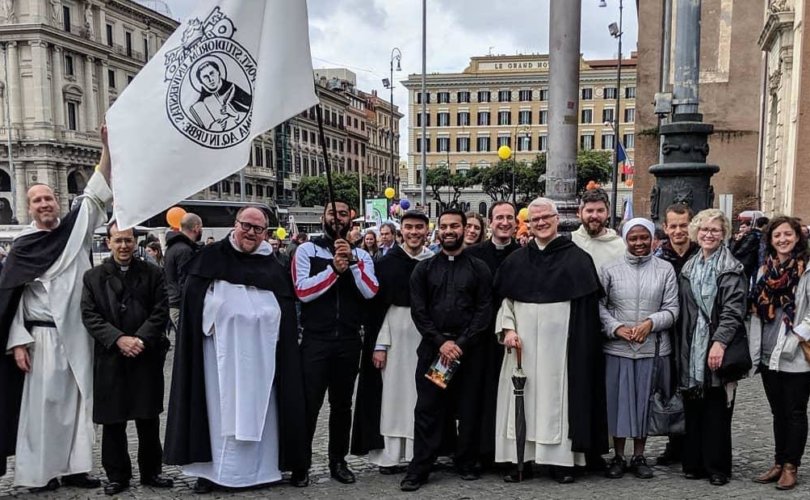 ROME, Italy, May 20, 2019 (LifeSiteNews) — “Now more than ever, it’s very important for us to stand up for human life,” declared Fr. Benedict Croell, director of development and mission advancement at the Dominican University of St. Thomas Aquinas — known as The Angelicum — as a group from the university marched for life in Rome on Saturday.

“We need to be strong as we can be because everything is changing,” he said. “There’s a reality to the scourge of abortion that people are waking up to.”

“We have students from Italy, from Malta, from Fiji, from New Zealand, from England, from Scotland, from the United States, from Ireland, and Ethiopia,” Fr. Croell told LifeSiteNews’ John-Henry Westen.

The Angelicum was the only pontifical university participating in Rome’s March for Life. During the preceding week, the Dominican school hosted the Rome Life Forum, which brought pro-life leaders from around the world together.

“We’re the only pontifical university in Rome that has Eucharistic adoration,” noted Croell.

He said the group felt it was important to carry signs promoting Project Rachel as they marched through Rome because it’s such an important ministry for women and men who are suffering.

Croell enthusiastically encouraged other Pontifical and Catholic universities to participate in the Rome March for Life in the future. “Every Pontifical University — every university in Italy — should be here.”

Fr. Croell noted that Cardinal Willem Eijk, the only cardinal other than Cardinal Raymond Burke to attend the March this year, is an Angelicum alumnus, and said more members of the hierarchy need to get involved.

While prelates say they stay away from the March for Life because they don’t want to get involved in politics, Fr. Croell said, “Leave politics out of it,” and come and pray the rosary.

Fr. Croell said that as the Angelicum group marched through Rome, “We all just prayed the rosary together for an end to abortion and for women who suffer the effects of an abortion.”

“For me, it has everything to do with for the gift of life,” he added. “We can’t be weaklings; we must be strong.”

“We see what’s happening in the United States. Things are changing quickly. Right now, there’s a momentum more than ever,” Fr. Croell said, noting the recent passage of pro-life legislation in various states.

“There are plenty of good people in Italy who are very pro-life. We just need to organize ourselves.”