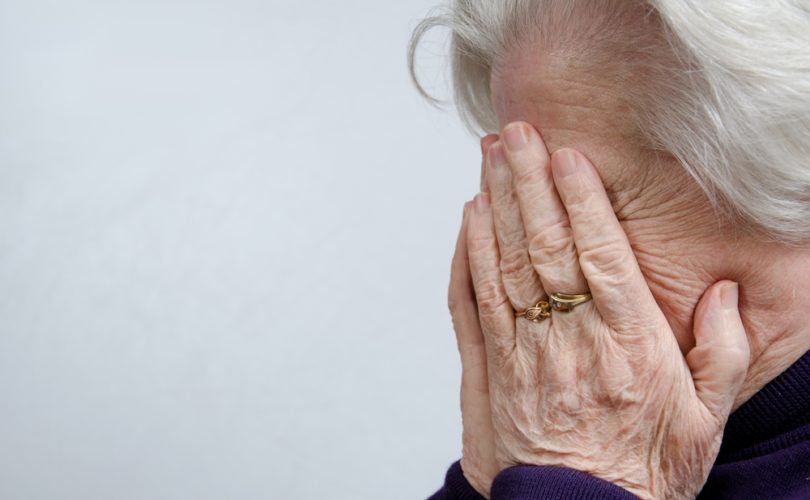 (LifeSiteNews) — A community care worker from Canada’s province of British Columbia has come forward to expose the pressure elderly people are under to request euthanasia.

Tsega B., who asked that LifeSiteNews not publish her surname, has worked as a community care worker for over a decade.

With tears in her voice, she described the sad reality of what goes on in homes and hospitals because of the government’s attempts to push euthanasia on the sick.

“When you see somebody who you care about being put to death, it is very emotional,” she said.

Tsega B. told LifeSiteNews stories of the elderly people she sees manipulated into euthanasia, having been convinced that they are burdens or that it is their best option.

“I don’t think most people know what is going on,” she said. “I worked for a very lovely lady who was recovering from stage four cancer. It was spreading, but she had a strong will and nothing wrong with her head. But the manipulation I saw to make her sign [MAiD consent forms] was heartbreaking, and she thought she was a burden to her kids, especially her daughter.”

Tsega B. related, through tears, that one day this lady broke down weeping and told her, “I’m not ready.” The care worker could only hug her and try to comfort her. The elderly woman is now dead from euthanasia, and Tsega was not allowed to be with her during her last days

Another time Tsega took an elderly man to an appointment she thought was just a general checkup; it turned out to be an appointment for his last consenting signature for euthanasia. When she protested, the doctor reminded her that she was merely a care worker. After that day, she was no longer assigned to that home, and so she never found out what happened to the man.

“Everything is emotional,” she said.

Tsega told LifeSitenews that she used to love nurses, but now “they are like angels of death, especially healthcare and hospice nurses.”

“They offer euthanasia as the easy way out, as a loving person,” she continued.

“If you have stage 3 cancer or PTSD? Then you have to go. I grew up in Ethiopia. Everybody has trauma. You remember as it is: sad, but it doesn’t mean you need to die.”

When asked if she believed euthanasia could be defined as “dying with dignity,” Tsega B. said, “Of course not.”

“Suffering is natural,” she said. “We can’t live without challenge; that’s life. We can overcome it. That’s human nature.”

“They do offer in a nice, sweet way, as a compassionate way of getting out of [difficulty],” she said. “They offer it, but they sugarcoat it like, ‘There’s an easy way out, you know.’”

Tsega B. shared her own experience with the culture of death in the healthcare system. When she discovered as a young woman that she was pregnant with her now 26-year-old son, the doctor offered her an abortion. Tsega said that she cried when she found out that she was pregnant because she did not know what to do.

“The doctor held my hand sweetly and offered me abortion,” she said. “It was the only option they gave me.”

RELATED: Hospice society: ‘Thousands’ of Canadians have moved to protect themselves from assisted suicide

Poor working conditions but “somebody has to do it”

Tsega expressed concern that modern “healthcare” no longer focuses on health, but on ending life. It also does not pay community care workers a living wage. She works three different jobs to support herself and often resorts to food banks to put food on the table.

Tsega B. also told LifeSiteNews that the companies who employ care workers do not care about their well-being. They are often abusive, do not fully compensate their employees, and are not accommodating about vacation time, let alone vacation pay.

“We are not valued,” she said. “If you ask for a raise, you are told that the business [would] go bankrupt if they gave everyone a raise, and then there would be no company and no work.”

“We are sent places that we should not be going with the cost of gas prices,” she continued. “You have to pay for gas out of your own pocket; the mileage they give you is not enough. We are literally slaves. If [we] do not go, our supervisors are angry and shout and push [us]. Some people become very abusive. We are pushed to work because there is nobody [else]. The only thing that is keeping you is your passion for your work and because you care for people.”

When asked why she stays in such a job, Tsega B. replied, “Somebody has to do it, and that somebody is me.” She said she truly cares for everyone she works with, the old, elderly, sick, and disabled, and recognizes that, however terrible the working conditions, it is a job that must be done.

“That is our payment at the end of the day: to see people laughing and taken care of,” she said.

“[But] we are facing an economic crisis like every Canadian. Our family members do not have enough work. We would not be suffering this situation if we were paid enough, and then we could carry our families through this. We wouldn’t have to go sometimes to food banks.”

Not only is the job physically demanding, it takes a huge emotional toll. As the patients become more attached to them than to their own families, care workers become their emotional support.

“When they die, we are there […]. When they cry, we are there,” she said. “Often, they are not comforted by their family because they get used to you and are more comforted by you. Most of us are dedicated and give our hearts to the job, not only our physical and emotional service.”

Tsega believes the government’s attempts to push euthanasia are related to their poor treatment of care workers.

“We have gotten very low as a society,” she said. “We’ve gone so far now that I don’t know how to change the system or the thinking. Healthcare is no longer about caring for people, it’s about business.”

At a time of rising inflation when she and other Canadians struggle to buy groceries and pay their bills, Tsega B. expressed her disapproval over recent government spending, especially Justin Trudeau’s recent pledge to give $100 million dollars to LGBT groups.

“For what?” Tsega B. asked. “They have equal rights. They can work like all of us. Every group can now earn a living if we are paid fairly.”

She believes the government ought to give the money earmarked to LGBT groups to people who cannot afford to buy the essentials of life.

“There are seniors who do not have Depends, and the care workers have to buy them for them because, after working their whole life, they still cannot afford to buy their medicine and Depends,” she revealed.