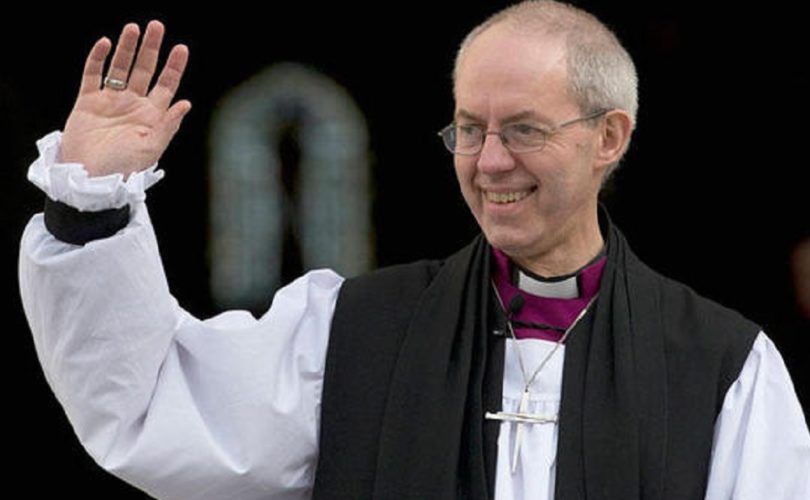 CANTERBURY, England, June 26, 2020 (LifeSiteNews) ― The Archbishop of Canterbury has said that some statues in England’s principal cathedrals will have to be removed.

Justin Welby, the leading cleric of the worldwide Anglican Communion, was given an opportunity by BBC Radio 4 this morning to say that the trespasses of historical figures honoured with statues could be forgiven. The Anglican archbishop didn’t take it.

“Well, we can only (forgive) if we’ve got justice, which means that the statue needs to be put in context,” he said.

“Some will have to come down. Some names will have to change. I mean, the Church, goodness me. You just go around Canterbury Cathedral: there’s monuments everywhere. Or Westminster Abbey,” he continued.

“We’re looking into all that. Some will have to come down,” he repeated.

“Yes, there can be forgiveness, I hope and pray as we come together, but only if there’s justice.”

Welby’s interviewer, Justin Webb, stated that this did not sound like forgiveness.

“You say you’re going to take down statues at Canterbury Cathedral,” Webb exclaimed.

“No, I didn’t  say that,” Welby replied. “I very carefully didn’t say that. It’s not my decision.”

However, the Archbishop of Canterbury again indicated that some monuments might be removed.

“We’re going to be looking at them very carefully and putting them into context and seeing if they should be there,” he said.

Welby then compared the removal of monuments to British dignitaries to the removal of Bolshevik Felix Dzerzhinsky, the first head of the Soviet secret police, from outside KGB headquarters in 1991.

“It’s what people do at times like this,” the archbishop said, “and it’s a good thing.”

Welby seemed to draw a line, however, at the mass destruction of representations of Jesus Christ as a “white European” called for by Black Lives Matter activist Shaun King, whom the archbishop agreed was “a thinking person.”

Asked if the way the western church portrays Jesus needed to be rethought, Welby agreed that the “sense that God is white” is wrong. However, he noted that as the leader of the Anglican Communion, he had been all over the world and seen Jesus depicted differently in the churches of many countries.

“You see a black Jesus, or a Chinese Jesus, or a Middle Eastern Jesus, which is, of course, the most accurate,” he said.

Welby believes the way to correct the impression that God is white is not by destroying sacred art but by emphasizing who Jesus is and is not.

“You see Jesus portrayed in as many ways as there are cultures, languages and understandings. I don’t think throwing out everything we’ve got (from) the past here does it, but I do think saying ‘That’s not the Jesus who exists, that’s not who we worship,” he said.

“It is a reminder of the universality of the God who became fully human.”

It was once customary for tombs and monuments of people or local or national interest, as well as statues of saints and war memorials, to be erected in British and European churches. There is a monument to George Gipps, the first Governor of New Zealand, in Canterbury cathedral. Over 3,300 people have been buried or commemorated in Westminster Abbey, including Sir Isaac Newton and Charles Dickens.

The iconoclasm raging through the United States, toppling statues of Christopher Columbus, Thomas Jefferson, George Washington, and St. Junipero Serra, among others, has spread to the United Kingdom, where statues of Winston Churchill and Queen Victoria have been vandalised as well as monuments to noted merchants ― and slave traders ― Robert Coulston and Robert Mulligan.

The destruction has continued farther afield in Europe, sparing not even images sacred to minority groups. The mayor of the Dutch city of Breda expressed sympathy for the local Polish community when an outdoor shrine to the Black Madonna of Częstochowa was vandalized, the mosaic image disfigured and the altar marked with BLM.