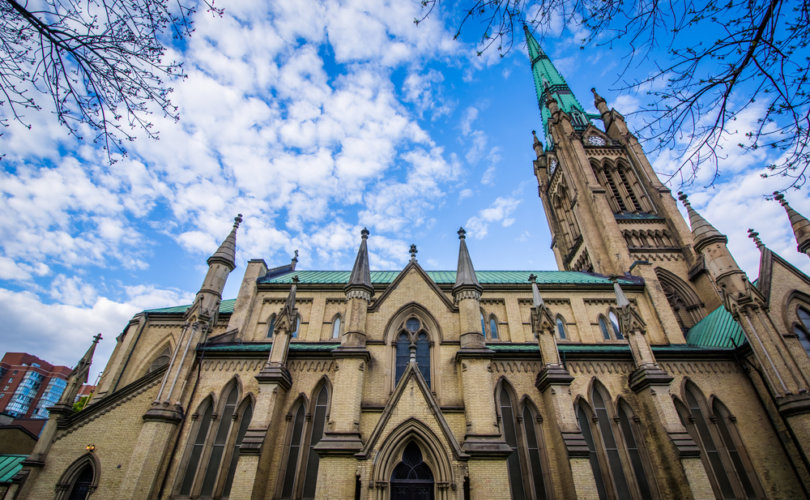 The Anglican Cathedral of St. James in TorontoShutterstock.com

July 20, 2016 (LifeSiteNews) — Seven bishops have publicly condemned the Anglican Church of Canada for a “fundamental departure from the faith” in voting to recognize homosexual “marriage” but will not leave the church over it.

The bishops of six rural dioceses — Algoma, the Arctic (whose suffragen also participated), Athabasca, Caledonia, Saskatchewan and the Yukon — have issued a joint statement condemning last week’s vote for its mismanagement (the motion passed by one vote only after a recount), for departing from both “the Scriptures and Apostolic Tradition of the Church Catholic,” and for threatening “our full communion within the Anglican Church of Canada and with Anglicans throughout the world,” the majority of whom are staunchly opposed to homosexuality.

But the seven dissenters made it clear they weren’t considering leaving the ACC as others did a decade ago to form the Anglican Network in Canada (ANIC).

“We unambiguously reaffirm,” they declared, “our commitment to Jesus Christ, the Savior of all, his body, the Church Catholic, the Anglican Church of Canada, the Anglican Communion, the scriptural, traditional and catholic definition of marriage as the lifelong union of one man and one woman as set out in both the Book of Common Prayer and the Book of Alternative Services.”

“But isn’t that a contradiction?” asked David Virtue, editor of the conservative Anglican blog, Virtueonline.org. “If you believe that the faith and order of the church has been that thoroughly compromised, why are they staying?”

Virtue offered his own explanation: “There is a stubborn determination by those orthodox bishops in the Anglican Church of Canada that they must stay in the AC of C because collegiality is more important than anything else.”

He noted that one of the seven, Bishop Michael Hawkins of Saskatchewan, made an individual comment that “what unites us is our faith and commitment to Jesus Christ. While these disagreements are painful and distressing, we need each other.”

But Virtue argues that Hawkins is wrong to assume the bishops who voted the other way “are, in fact, Christians, and not unregenerate men and women dressed up with miters and staffs, strutting around playing the game of church.”

Virtue goes on to cite several Scripture passages indicating “that unity is not more important than truth,” such as 2 Thessalonians 3:6: “Now we command you, brethren, in the name of our Lord Jesus Christ, that you keep away from every brother who leads an unruly life and not according to the tradition which you received from us;” and Romans 16:17: “Now I urge you, brethren, keep your eye on those who cause dissensions and hindrances contrary to the teaching which you learned, and turn away from them.”

In the Anglican Church of Canada, the dissenting bishops and sympathetic priests and laity are in the minority. But in the worldwide communion of independent national churches, they can count on the support of the majority of bishops and laity, who are concentrated in Africa. This majority pushed through a suspension of the U.S. church for supporting same sex “marriage” last year and regularly endorses breakaway groups such as ANIC. Conservative Anglicans worldwide have maintained an alternative Anglican alliance called the Global Anglican Future Conference since 2008.