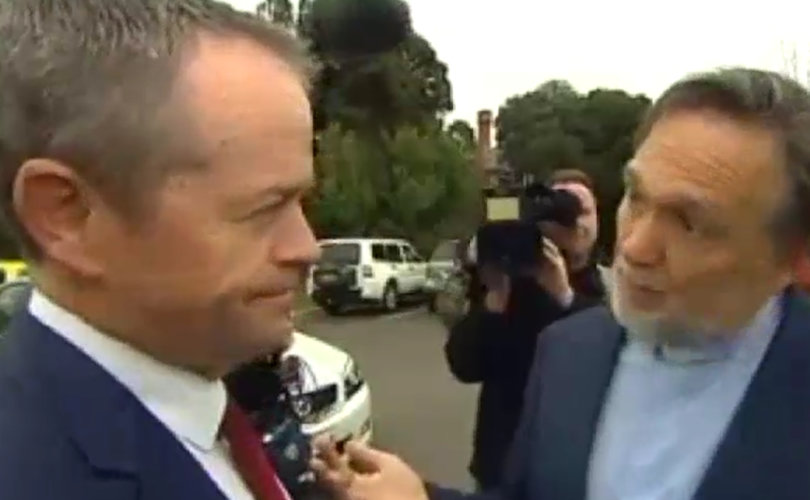 CANBERRA, Australia, September 1, 2016 (LifeSiteNews) — With the fate of Australia’s proposed same-sex “marriage” referendum hanging on the support of the Labour Party, its leader was confronted by an insistent evangelical Anglican priest who accused him of fomenting hate over the issue.

Bill Shorten was leaving an ecumenical church service held to begin the latest session of Parliament alongside other parliamentarians when Rev. Ian Powell approached Shorten and accused him of maligning opponents of same-sex “marriage” during the last election.

“You described people who weren't in favour of changing the definition of marriage as ‘haters who come out from under rocks.’ Can I ask you not to speak like that?” Powell said. “Because I know lots of people like that.”

When Shorten said nothing, and media cameras honed in on the pair, Powell continued. “Please don't speak like that about other Australians, so we can have a civil and tolerant discussion rather than the hate speech coming from our prospective prime minister.”

Shorten told Powell, “Please don't hector me. Give me the chance to speak.”

But when he began his response with “First of all, people of faith can be opposed to marriage equality,” Powell reacted by saying, “It’s not about faith. It’s just a point of view,” since Shorten’s accusations had been aimed at anyone who opposed same-sex marriage, not all of whom are religious.

After waiting for the priest to subside, Shorten continued. “People of faith can be opposed to marriage equality, but some people who object to marriage equality do have homophobic attitudes.” He turned and got into his car while Powell said, “Thank you for that” to Shorten’s back.

OL @billshortenmp bailed up by a priest over his views on gay marriage. Latest on the blog https://t.co/Z0b17shjXRhttps://t.co/hj32e2RmJ5

Shorten made his original comment about “haters who come out from under rocks” in debating whether Australia should resolve whether to legalize same-sex “marriage” through a law or, as the governing Liberal National coalition proposes, through a national referendum.

Shorten’s view was that a referendum would be more divisive. Lately, he has also said he believes a referendum might lose, delaying for some time the advance of the LGBT agenda.

The Liberal National coalition won the last election, but its once-safe majority in the House of Representatives was reduced to a one-seat margin.

Prime Minister Malcolm Turnbull says he still intends to present a bill for a same-sex marriage referendum and is confident it will pass, but it is questionable whether it can pass in the Senate too, where opposition members predominate.