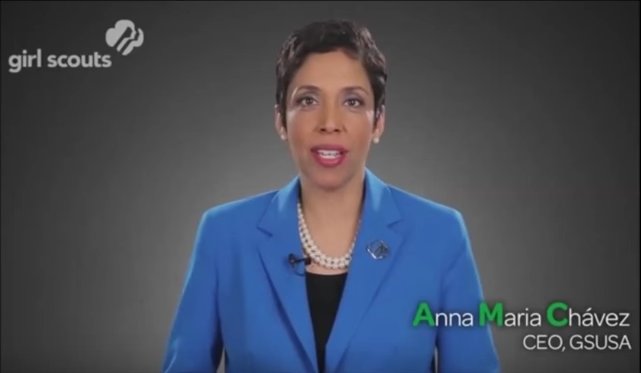 February 28, 2014 (LifeSiteNews.com) – In response to a video released by Girl Scouts USA CEO Anna Maria Chávez denying that the organization has any ties to Planned Parenthood, a group of pro-life ex-Girl Scout moms has accused Chavez of being “misleading and deceitful.”

In her video Chavez had attempted to pacify the growing pro-life CookieCott protest movement that is derailing the annual cookie-selling season, saying, “we do not now, nor have we ever had a relationship with Planned Parenthood.”

The moms with MyGirlScoutCouncil retort that this “blatantly false” and say that at the council level of the Girl Scout organization, “there is a long history of local councils working with Planned Parenthood.  Documented examples go back as far as 1972 and through 2013.”

In 2004, the moms point out, “Girl Scouts USA CEO Kathy Cloninger stated on the Today Show that Girl Scouts have relationships with Planned Parenthood organizations across the country.”

In their video MyGirlScoutCouncil provides a link to supporting documentation, much of it from the Girl Scouts own materials, which lists a score of documented examples showing the Girl Scouts' involvement with Planned Parenthood.

The MyGirlScoutCouncil video also highlights the connection between Girl Scouts USA and the World Association of Girl Guides and Girl Scouts (WAGGGS), to which all American girl scouts automatically belong, and gives evidence that WAGGGS has a formal relationship with the International Planned Parenthood Federation.

A GSUSA document shows that it funds WAGGGS with $1.5 million annually.

In her video Chavez had said that “reproductive issues are deeply private matters best left to families” and said that she “finds it deeply unsettling that anyone would use the Girl Scout brand to have very adult conversations.”

One program recommended for girl scouts, “The Eloquent Women: 13 famous human rights speeches by women,” includes selections including a speech by Planned Parenthood founder Margaret Sanger and “several speeches centered on sexuality  that are inappropriate resources for girls, one of which recommends the use of profanities as an effective public speaking tool,” says MyGirlScoutsCouncil.

“These statements by Chavez are deeply concerning and illustrate the Girl Scouts' consistent practice of saying one thing and doing another,” the moms' video concludes.

To Chavez's statement that the Girl Scout organization is “committed to serving God and our country,” the moms point out that the Official Girl Scout curriculum places an asterisk by God in the promise, and states “Girl Scouts USA makes no attempt to define or interpret the word 'God' in the Girl Scout promise.”

GSUSA also states that girls may remove God from their pledge.

“How serious is the Girl Scout's ‘commitment to God’ considering the organization allows Him to be omitted and/or replaced?” the moms ask.

“There’s no question where GSUSA’s CEO’s ideology lies. During Chávez’ time as President of Girl Scout Council of Southwest Texas, she was the keynote speaker in an event where her council partnered with numerous abortion groups including Planned Parenthood,” Bomberger wrote. “But Girl Scouts doesn’t ‘partner’ with Planned Parenthood,” he quipped.