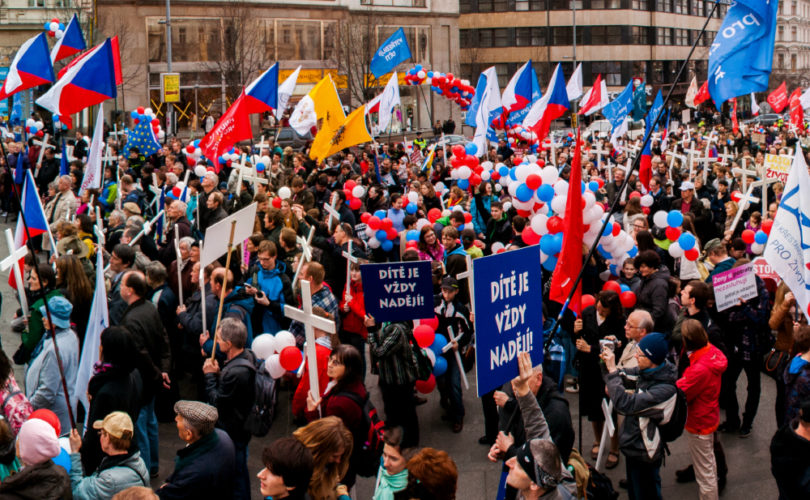 An estimated 2,500 to 3,000 participants taking to the streets of Prague in support of the right to life, according to organizers, the Movement for Life of the Czech Republic (Hnutí Pro život ČR).

The aim of the march, the organizers said, is to draw attention to the continuing injustice that is being perpetrated on more than 20,000 children who are killed annually by abortion, and to assure women in crisis pregnancies that they have a choice.

“We want every unexpectedly pregnant woman to know that she is not left on her own,” said Radim Ucháč, president of Hnutí Pro život ČR.

“We want men to be aware of their responsibility and women to find support in them. We want to save the lives of 23,000 children every year and let them have a chance to live,” Ucháč said.

He stressed that the “thousands of people [who] come to the March for Life [are] willing to help.”

The march began with Mass at the Dominican church of St. Giles in Prague's Old City, celebrated by the Archbishop of Prague, Cardinal Dominik Duka, OP.

The marchers then gathered in St. Mary’s Square (Mariánské náměstí) and proceeded through the ancient city's streets to gather around the statue of St. Wenceslas, the patron saint of Bohemia, for speeches and presentations.

Among the speakers was Tomio Okamura of the opposition Dawn of Direct Democracy Party, who said that all people should be able to take the protection of human life for granted but, sadly, this is not the case.

Okamura criticized the “breaking up of the large Christian family” and stressed the need for political support of the family based on marriage between a man and a woman.

The organizers of the event presented an open letter addressed to the Prime Minister Bohuslav Sobotka, urging him to develop strategies to assist pregnant women and improve family support, encourage men to be responsible for their wife and family, and adopt legislation to protect life from the moment of conception.

“We long for the day when all children will be protected from the moment of conception,” said Radim Ucháč, adding that the motto of Hnutí Pro život is “We are creative. We are for life. We always look for a solution.”

The crowd's mood lightened when Hnutí Pro život revealed that abortions have slightly decreased in the country while the number of live births is up.

The increased number of births reflects an uptick in fertility levels as well, which, according to government statistics, now stands at 1.53 children per woman. That, too, is up from 1.46 in 2013.

The pro-life movement is gaining momentum across Europe, where the “Day of the Unborn Child” is observed in many countries on a weekend close to March 25, the day Christians traditionally celebrate the Annunciation of the Lord.

Romania this year celebrated a pro-life week with the theme “Every Life Is a Gift.” The week's events led up to the 5th annual March for Life held in Bucharest on March 21st.

Moreover, Studenti pentru Viata said that the Republic of Moldova held its first pro-life marches in the cities of Kishinev and Orhei with the same theme of “Every Life Is a Gift.”

“The message of this year’s [event], conveyed by the slogan 'Every Life Is a Gift,' is that each person is unique and has infinite value,” said Studenti pentru Viata in a press release. “Society has only to gain by supporting persons with special needs and particularly by helping women in pregnancy crisis to give birth and raise the persons they are carrying in their wombs. These persons are gifts to their mothers and also a gift made by the woman to her family and to society.”

The march in Bucharest finished in Bucharest again this year, with the concert “Live for Life,” which showcased many admired Romanian performers, including tenor Vlad Mirita.

In an interview with Romania Family News, Mirita was asked why he chose to attend the annual pro-life event.

“Ultimately, life itself is being denied,” Mirita said. He urged his fellow Romanians to ignore any anti-life measures that “society and mass media propose.”